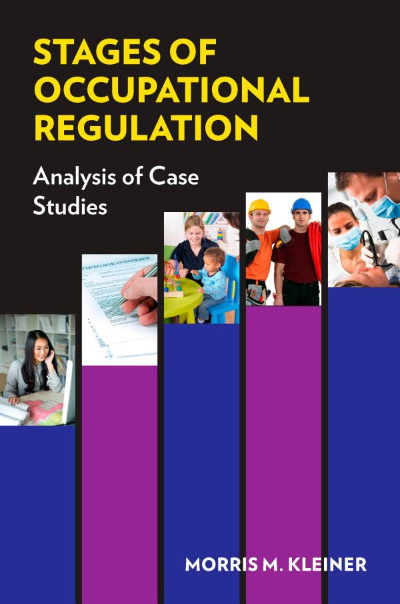 Occupational regulation has significantly grown in breadth and scope over the past several decades in the United States. The White House has taken notice—recently releasing a report documenting the costs and benefits of occupational licensing (U.S. Department of the Treasury, Council of Economic Advisors, and U.S. Department of Labor, Occupational Licensing: A Framework for Policymakers [Washington, D.C.: White House, July 2015], at https://www.whitehouse.gov/sites/default/files/docs/licensing_report_final_nonembargo.pdf). No researcher has done more to shed light on and bring attention to the effects of this important labor-market institution than Morris Kleiner. In his latest work, Stages of Occupational Regulation, Kleiner presents case studies of seven different occupations that have varying degrees of occupational regulation. As more states begin to regulate entry into particular professions with occupational licensing laws, the effects are likely to differ, and this is precisely what Kleiner illustrates.

Occupational regulation is often separated into three distinct levels of restriction. Licensing laws, the most onerous of the three, make it illegal for an individual to practice in a profession without first meeting certain requirements (such as passing an exam or completing a specified amount of schooling). Certification laws do not restrict entry but instead protect titles: individuals are barred from using specific titles (for example, “certified financial analyst”) without first completing a set of entry requirements; they are free to practice in the profession if they don’t complete these requirements, but only if they do not use the protected title. Registration laws maintain a list of professionals that is made available to the public and is the least-restrictive form of occupational regulation.

In this book, Kleiner presents a very careful and comprehensive empirical examination of the effects of licensing on seven professions. Although numerous regression results are presented and discussed, readers whose eyes glaze over when they are presented with statistics can easily gloss over these results and still learn a great deal about the effects of occupational regulation. A recurring theme is how occupational licensing parallels unionization. Kleiner points out the similarities and differences between the two institutions—most notably that whereas unionization rates have substantially declined, the percentage of workers directly affected by occupational licensing has substantially increased (p. 8).

Interior designers are professionals who are licensed in just four states and the District of Columbia (p. 16). Kleiner is unable to find evidence that licensing has resulted in any significant labor-market changes (such as higher wages or slower employment growth) for interior designers, but at the same time a careful summary of the existing literature provides little evidence that regulation has increased consumer safety or improved the quality of services, arguments that proponents of occupational regulation often make.

Kleiner finds similar results for mortgage brokers and preschool teachers, where a slightly larger number of states (eighteen and twenty-seven, respectively) license each profession (p. 11). What seems to emerge in Kleiner’s book is that occupational regulation does not impose measurable costs on consumers until most states regulate a profession. For electricians and plumbers, who have to be licensed in nearly all states, licensing seems to have increased wages without reducing the incidence or severity of on-the-job injury (pp. 156–66). In the case of a fully mature regulated profession, dentistry, Kleiner shows that dentists can increase earnings by limiting the number of tasks that dental hygienists are allowed to perform (pp. 190–91). Once again, there is little evidence that consumers benefit from dentists protecting their turf by means of more intrusive regulation of dental hygienists (pp. 201–2).

Alice Ramey noted in her review of Kleiner’s first book, Licensing Occupations: Ensuring Quality or Restricting Competition? (Kalamazoo, Mich.: Upjohn Institute, 2006), that she was “left wanting more” (“Book Review: Licensing Occupations,” Monthly Labor Review [June 2010]: 56). Reading Kleiner’s second volume on the effects of occupational regulation invokes a similar feeling for me. My feelings are not an indictment of Kleiner’s work but instead a testament to the importance of the institution and the relative lack of attention devoted to the subject. For example, although Kleiner finds that licensing has not affected wages or employment for interior designers, the estimates presented may not tell the whole story. Aspiring interior designers may be discouraged from entering the profession, a factor that would not present itself in employment estimates. Trying to hammer down the effects of occupational regulation on individuals who are considering entry into a profession is difficult. In fact, research by Mario Pagliero suggests that state bar exams are made more difficult when the number of candidates increases (“The Impact of Potential Labor Supply on Licensing Exam Difficulty,” Labour Economics 25 [2010]: 141–52).

A more thorough discussion of the political economy of occupational regulation would also be enlightening. What might explain why Alabama, the District of Columbia, Florida, Louisiana, and Nevada enacted licensing legislation for interior designers, yet efforts to regulate that same profession were regularly thwarted in Minnesota (p. 21)? Also, licensing grows and spreads quickly for some professions but very slowly for others. In one case I have researched, occupational licensing for opticians grew rapidly in the 1950s but then stalled suddenly in 1988, when California was the final state to enact a new licensing law (Edward Timmons and Anna Mills, Bringing the Effects of Occupational Licensing into Focus: Optician Licensing in the United States, working paper [Arlington, Va.: Mercatus Center, February 17, 2015]). Professional organizations’ political gamesmanship in securing licensing remains an understudied issue.

I have no doubt that Kleiner is already searching for solutions to these issues and trying to obtain a better understanding of the effects of occupational regulation. His hard work, passion, and dedication to bringing attention to this issue has no doubt inspired new and younger researchers like myself to pursue new studies of occupational regulation. Readers across all ranges of understanding of the issue would be well served by a careful reading of Stages of Occupational Regulation.