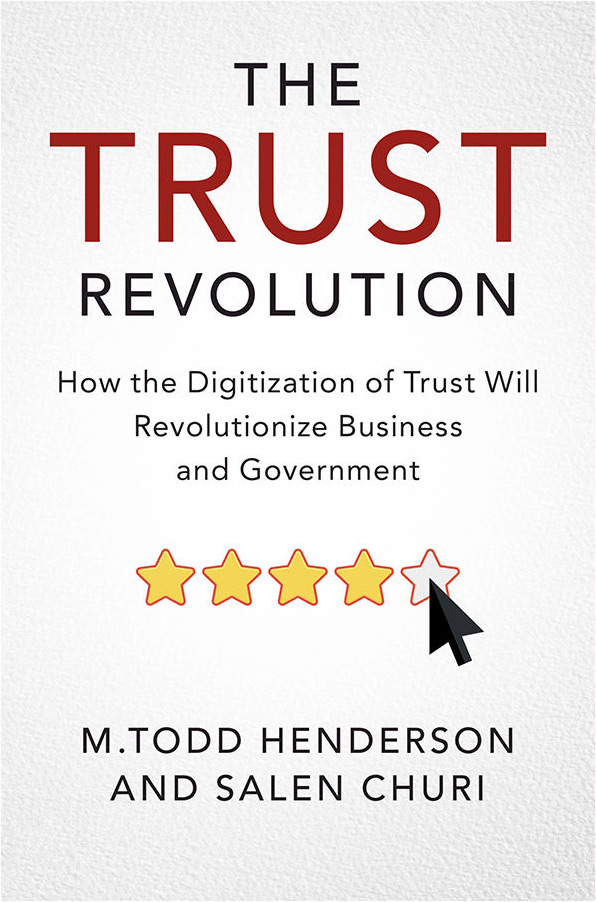 The Trust Revolution
How the Digitalization of Trust Will Revolutionize Business and Government
M. Todd Henderson and Salen Churi
Kindle Hardcover Paperback
This book review appeared in the Summer 2020 issue of The Independent Review.

The Trust Revolution provides an account of the role that trust plays in improving human conditions and of how technology can shape that role. These topics can appeal to a broad audience that spans from those interested in the economic success of societies to those curious about the implications of recent technological innovations for human relations. Hence, I believe that the book fits quite nicely with readers of The Independent Review.

The Trust Revolution can appeal to such a broad audience because it brings together two very important issues. On the one hand, the first part of the book, loosely from chapter 1 to chapter 6, resembles and draws from previous work studying the conditions that facilitate human flourishing. In this respect, the book can be linked to work such as Adam Smith’s Wealth of Nations and Daron Acemoglu and James A. Robinson’s Why Nations Fail: The Origins of Power, Prosperity, and Poverty (New York: Crown, 2012).

The second part of the book, on the other hand, studies the implications of the technological development behind the emergence of the sharing economy for the provision of trust. In this respect, the book is related with two recent books: The Sharing Economy: The End of Employment and the Rise of Crowd-Based Capitalism by Arun Sundararajan (Cambridge, Mass.: MIT Press, 2016) and Tomorrow 3.0: Transaction Costs and the Sharing Economy by Michael C. Munger (New York: Cambridge University, 2018).

In my opinion, the greatest strength of The Trust Revolution is the authors’ ability to provide a new framework to analyze some of the recent technological developments and to better understand and predict how different agents in the economy react to these developments. Their use of the economic framework of demand and supply to study the provision of trust appears particularly fruitful in highlighting how many of the policy responses to new technological developments may be driven by regulators’ concerns over their own diminished importance as trust providers rather than by genuine interest in the welfare of consumers. In this sense, the book shows how recent appeals to the “sharing economy” to approach regulation in a more proactive way may be ill posed and hopeless. For example, the book helps the reader see how statements such as “Regulation is often the most significant barrier to future growth for sharing economy firms. This is particularly unfortunate since the incentives of city governments and sharing economy firms are often aligned” (Sarah Cannon and Lawrence H. Summers, “How Uber and the Sharing Economy Can Win Over Regulators,” Harvard Business Review 13, no. 10 [2014]: 24–28) are based on an underlying misunderstanding of the nature of trust provision and of the incentives that regulators have to protect their role as trust providers.

In this respect, I found illuminating the insight that companies such as Lyft and Uber are competing with the Taxi Commission rather than with taxi drivers and found particularly powerful and well suited the authors’ use of an analogy between the position of taxi drivers and the Taxi Commission toward ride-sharing companies and the position of bootleggers and Baptists toward the prohibition of alcohol. Nevertheless, I believe that the authors’ enthusiasm for the “trust revolution” may have caused them to overlook some of their own assumptions and to miss some important aspects in their analysis. I elaborate more on these problems as I describe the content of the book.

The book can be loosely divided in two parts. The main purpose of the first part is to convince the reader that trust plays a key role in enabling humans to prosper and that new technologies may reshape the provision of trust considerably. The second part of the book provides examples of the arguments in the first part and speculates about possibilities of trust being provided in new and innovative ways.

The authors define trust as “the information and reliability that enables two or more parties to coordinate, cooperate, or to do business while having confidence in fair dealing” (p. 22), and they argue that trust enables humans to access the benefits of specialization and to unlock productivity.

The authors base their argument on three premises: (1) trust is an innate feature of human nature; (2) trust facilitates exchanges; and (3) by facilitating exchanges, trust increases economic performance. I find the discussion of premise (1) compelling because there is growing evidence that humans extend trust in situations in which traditional economic theory recommends otherwise (e.g., see Joyce Berg, John Dickhaut, and Kevin McCabe, “Trust, Reciprocity, and Social History,” Games and Economic Behavior 10 [1995]: 122–42). I find the discussion of premises (2) and (3) less compelling.

The authors argue that trust facilitates exchange, which then leads to specialization, productivity, and ultimately wealth (p. 27). Although they provide some evidence of the link between trust and social well-being, the cited work and related arguments appear insufficient to justify premises (2) and (3). First, as Munger describes in Tomorrow 3.0 (p. 6), trust is only one of the possible impediments to cooperation. Using the framework of transaction-cost economics, he discusses how triangulation and transfer costs also play a role. Hence, even if trust is very high, cooperation may be impaired by high-enough search costs (triangulation) or high-enough payment and/or transportation costs (transfer). This aspect is particularly important because the new technologies of interest in The Trust Revolution most likely affect not only trust but also triangulation (Andrey Fradkin, “Search Frictions and the Design of Online Marketplaces,” working paper, MIT, 2015) and transfer costs (Hal R. Varian, “Computer Mediated Transactions” American Economic Review 100, no. 2 [2010]: 1–10).

Second, it remains unclear not only whether trust represents the main facilitator of cooperation but also whether trust should play any role at all once institutions are taken into consideration (Oliver E. Williamson, “Calculativeness, Trust, and Economic Organization,” Journal of Law and Economics 36, no. 1, part 2 [1993]: 469). In this sense, the authors’ definition of trust appears to blend the mechanisms to create trust (information and reliability) with the trust outcome (willingness to commit to a collaborative effort before knowing how the other party will behave, as in James S. Coleman, Foundations of Social Theory [Cambridge, Mass.: Harvard University Press, 1990]).

Irrespective of these potential weaknesses, the first part of the book contains two quite powerful insights. The first insight is the introduction of a typology of trust that departs from the traditional approach of focusing on trust “generators” (e.g., see Dan Ariely’s blog The Trust Factory) and moves toward a focus on trust “providers” (chapter 4). The authors identify three main trust providers—the government, corporations, and personal relationships—and highlight how the three categories differ in the value they provide and the cost they entail:

This new perspective is particularly valuable when combined with the analysis of how recent technological developments and the creation of platforms change the benefit–cost analysis of different trust providers, which brings me to the second insight.

The second insight, given in chapters 5 and 6, consists of a new way to think about trust, in particular the idea that we should think about trust in terms of demand and supply. Within this framework, individuals demand trust and providers supply it in competition with each other (p. 106). Hence, trust provision evolves over time as a function, among other things, of the relative costliness of different trust providers. Hence, the authors conclude, technological advancements may cause a reshuffling of the relative importance of trust providers away from government and businesses toward persons because the new technology behind the sharing economy has the potential to increase the scalability of personal trust (p. 46).

Although I am very sympathetic to the conclusion the authors draw, I also think it is worth keeping in mind that this conclusion rests on the implicit assumption that different trust providers are perfect substitutes. Can the ex ante screening performed by platforms created by recent technological advancements substitute for the ex ante screening performed by governments and business? I believe that the answer to this question is with no doubt “yes,” which supports the authors’ conclusion that government and businesses should become less-important trust providers. Given that government- and business-provided trust is concerned mostly with ex ante screening, to what extent does a well-functioning ex post monitoring system such as the continuous feedback allowed by new technologies remove the need for up-front certification? (See Liran Einav, Chiara Farronato, and Jonathan Levin, “Peer-to-Peer Markets,” Annual Review of Economics 8 [2015]: 615–35.) Is it possible that instead of losing in importance, government and businesses will specialize in the provision of ex ante screening, while new platforms will specialize in the provision of ex post monitoring? Providing an answer to this question is quite difficult, but it is important to keep the question in mind because it may change the implications of the analysis performed in the book and lead to an increase, rather than a decrease, in the provision of trust by government and businesses if ex ante and ex post mechanisms work as complements.

The second part of the book, from chapter 7 to chapter 11, provides practical examples of the arguments advanced in the previous chapters and speculates about the future. This exercise is useful in demonstrating the authors’ ideas and providing tangible applications to everyday-life decisions. The greatest strength of this part of the book is that it addresses a number of concerns usually raised relative to recent technological developments and their potential role as trust providers, such as externalities, information asymmetry, and monopoly power (see, for example, Benjamin G. Edelman and Damien Geradin, “Efficiencies and Regulatory Shortcuts: How Should We Regulate Companies Like Airbnb and Uber?” Stanford Technology Law Review 19 [2015]: 293).

Nevertheless, it is in this part that the authors’ enthusiasm for recent technological developments appears to bite the most in terms of reduced analytical rigor. For example, although recent technological developments might facilitate real-time information flows from providers and consumers (p. 147), the claim that corporate law and business regulation could be replaced with machine algorithms that maximize corporate objectives more efficiently (p. 183) resembles the socialist computational proposal (Oskar Lange, “The Computer and the Market,” in Socialism, Capitalism, and Economic Growth: Essays Presented to Maurice Dobb, ed. C. H. Feinstein [Cambridge: Cambridge University Press 1967], 158–61). In particular, this proposal seems to run up against the “knowledge problem” (F. A. Hayek, “The Use of Knowledge in Society,” American Economic Review 35, no. 4 [1945]: 519–30) because it assumes that it would be possible for shareholders to define their goals and identify optimal courses of action in relation to all future states of the world ex ante.

To conclude, I believe that The Trust Revolution presents some provocative and well-thought-out ideas that are potentially appealing to a broad audience, which makes the book well suited for the target audience of The Independent Review.