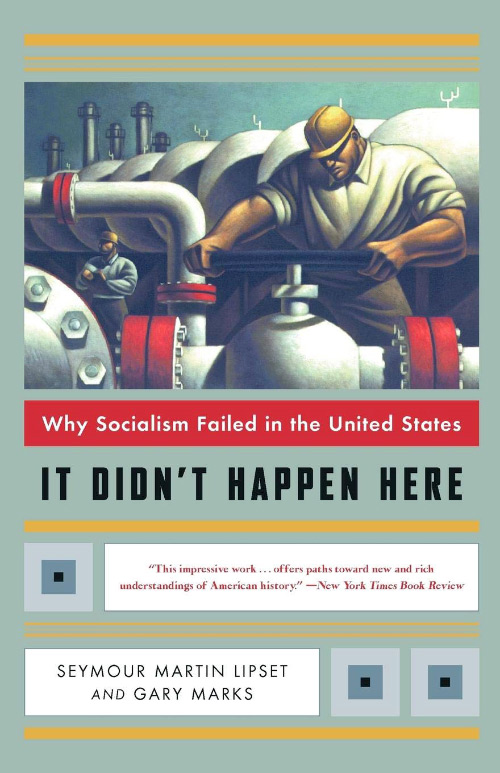 It Didn’t Happen Here
Why Socialism Failed in the United States
Seymour Martin Lipset and Gary Marks
Hardcover Paperback
This book review appeared in the Summer 2002 issue of The Independent Review.

For conservatives and libertarians, reading a work that makes serious claims about the absence of socialism in the United States is a bit jarring. Yet political sociologists Seymour Martin Lipset and Gary Marks have offered another installment on this theme in their book It Didn’t Happen Here. Lipset, a former president of the American Political Science Association and the American Sociological Association, has dealt with this issue for much of his long professional career, beginning with Agrarian Socialism: The Cooperative Commonwealth Federation in Saskatchewan (Berkeley: University of California Press, 1950). Marks is a Europeanist who teaches at the University of North Carolina at Chapel Hill. The authors ask us to accept that there is no socialism in the United States and, by inference, that the United States has remained “exceptional” in its politics and governance, compared to other Western industrial democracies, because nominally socialist parties, specifically the Socialist Party of America (SPA), did not effectively survive past the 1930s (though the official dissolution of the SPA did not occur until 1963). But this request is too much to ask of scholars of American politics, American political thought, and comparative public policy—not only because the analysis is so narrowly focused on parties, ignoring policy, but also because Lipset and Marks tell just half the story of the socialist experience in the United States.

From the present book, we learn a great deal about socialist party activity from 1870 to 1930, but almost nothing about socialist party organization and movements after 1945. Moreover, the authors devote little attention to the influence of socialist public policy both before and after this sixty-year period. The question might be put: What difference does it make that socialist parties in the United States failed by the middle of the twentieth century if socialist policy, state regulation, and state enterprise flourished in the United States both before 1870 and after 1930?

Let us review the basics of the book. The authors canvass the standard socialism-in-decline themes and the themes that have been linked to this thesis—such as the role of the two-party political system, the (dis)affiliation with labor unions, the role of immigrants and immigration, the place of ideology and party stratagems, the relationship with communists, and state repression and violence toward socialists. Lipset and Marks identify three aspects (dependent variables) of the failure of socialism: (1) the inability “to sustain a strong and durable socialist party”; (2) the inability “to create an independent labor party in alliance with mainstream unions”; and (3) the inability “to capture one of the major parties” (p. 263). Although most analysts would concede the first two points, the latter point is problematical because a reasonable argument and substantial evidence (much of it provided by Lipset and Marks themselves) indicate that the national Democratic Party adopted a socialist agenda in the 1930s and that socialist ideals influenced many Democrats from the 1960s through to the 1980s. Even today, the left wing of the national Democratic Party, led by Senators Ted Kennedy, Paul Wellstone, and Hillary Clinton, regularly resorts to socialist nostrums such as state regulation, state participation in the economy, and the expansion of the welfare state.

Throughout the book, the authors explore the determinants (independent variables) of the failure of socialism through comparative and historical analysis. They point to four interacting factors: foundational cultural values, the heterogeneity of the American working class, the incompetently managed agency of socialist party leaders, and the U.S. party and electoral system. They regard the first factor as the leading influence and the next two as sufficient in causing the absence of entrenched socialist partyism. The last factor they find to have had limited influence.

The authors’ emphasis on elements of political culture centers on values of “individualism and antistatism.” In effect, they argue that a popularly appealing libertarian political culture in the United States put the kibosh on worker, immigrant, and middle-class alternative preferences for collectivist policy solutions and for parties advancing collectivism—workers and immigrants composing the bulwark of socialist support prior to World War I. “Socialism, with its emphasis on statism, socialization of the means of production, and equality through taxation, was at odds with the dominant values of American culture” (p. 266). Lipset and Marks provide little evidence, despite its importance for their explanation, regarding the role of individualism and antistatism in undoing socialist and labor parties. Unlike other aspects of their analysis, this one receives no chapter-length comparative consideration. Indeed, one might easily imagine that Americans have been as much influenced by “ideological egalitarianism,” as Lipset argued in association with Reinhard Bendix in Social Mobility in Industrial Society (Berkeley: University of California Press, 1961), or by commercial values, as he made plain in his famous article “Some Social Requisites of Democracy: Economic Development and Political Legitimacy” (American Political Science Review 53 [1959]: 69–105). (Other useful contributions on the theme of the United States as a “commercial state” are Benjamin Barber’s Jihad vs. McWorld [New York: Ballantine Books, 1996] and Niall Ferguson’s The Cash Nexus [New York: Basic, 2001], pp. 346–72.)

Egalitarianism and statism, however, have actively countervailed against commercial values in U.S. history, and, as a result, socialism has actually had a significant influence on politics and governance. Even if the United States can best be described as a commercial state, state regulation and income redistribution have done equality’s bidding. This equality is not the “equality of opportunity” that politicians so often espouse on the stump, but the long-standing solicitation of “equality of results” through state intervention. From colonial times to the turn of the twenty-first century, as Jonathan R. T. Hughes emphasizes in The Governmental Habit Redux (Princeton: Princeton University Press, 1991), redistributed wealth, state control, and constrained commerce, as opposed to political party developments, have been the real fruits of socialism in America.

Another determinant putatively encouraging the decline of socialism is the heterogeneity of the American working class. This is quite clearly an intervening variable—the outcome of “individualism,” in the authors’ parlance, or of commercial values, from my point of view. American workers do not exhibit working-class solidarity or consciousness because they are attracted to the benefits of material prosperity and upward social mobility, and they correctly understand class solidarity to be an impediment to their prosperity and mobility.

Lipset and Marks also cite the failure of socialist party leaders to compromise with union leaders to form a viable labor party. This argument and the evidence brought to bear on it are more convincing. Indeed, the authors contrast the intransigence of socialist leaders to the thoroughgoing pragmatism of the communist leadership in a chilling chapter on the communists’ strategy of subterfuge and extraordinary electoral success behind the scenes, specifically during Franklin Roosevelt’s campaigns and administrations.

Finally, Lipset and Marks give limited credence to the “gift” of white manhood suffrage (voting rights) prior to industrialization as an important factor in integrating most of the electorate into the dominant two-party system. Federalism also assisted the dominance of the two-party system, although, as the authors point out, access to elective offices at the state and municipal levels actually helped socialist candidates at the turn of the twentieth century.

Ultimately, the authors’ arguments and their comparative analysis of European countries and Canada miss much of the story of socialism in America. As noted, Lipset and Marks give short shrift to the socialist policy aspects of the national Democratic Party starting in the 1930s. Moreover, they overlook the Republican appropriation of Keynesian policy nostrums during the 1960s and 1970s: President Richard Nixon’s “We are all Keynesians now” was no hollow admission.

Indeed, socialism is alive and well in America. Consider the consolidation of the welfare state by the Social Security Act; the undermining of free-labor markets by an ongoing series of statutes; the provision of health care for welfare recipients and the elderly through Medicaid and Medicare; the microregulation of business activity through the antitrust laws; the intrusive and costly environmental laws; and the massive spending on health, education, and various forms of welfare. The idea that socialism has failed in America clearly defies empirical observation.

It Didn’t Happen Here will help readers to understand the travails of the SPA between 1870 and 1930, but it fails to satisfy as a comparative history of the broader influence of socialism on parties and policies.