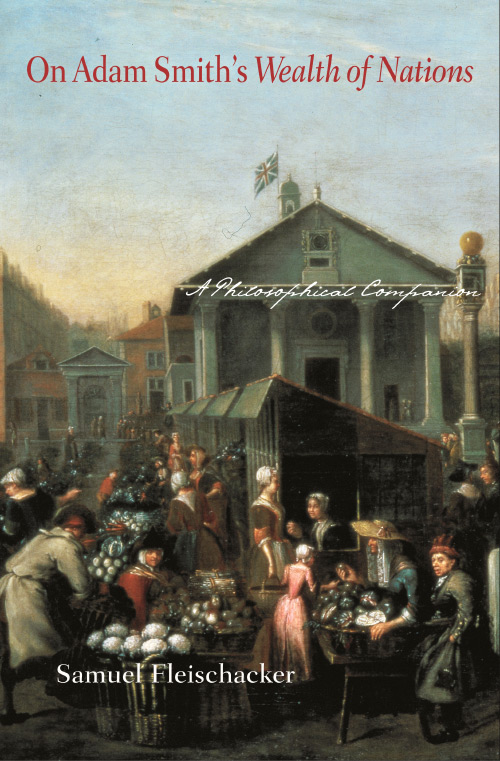 On Adam Smith’s “Wealth of Nations”
A Philosophical Companion
Samuel Fleischacker
Kindle Hardcover Paperback
This book review appeared in the Winter 2005/06 issue of The Independent Review.

Adam Smith’s writings have recently undergone a revolution. For almost two centuries, Smith was hailed as the Founding Father of capitalism, with his 1776 Wealth of Nations (hereafter WN) a manifesto for private property, free trade, and free markets. Beginning in the 1970s and 1980s, however, several scholars claimed to discover that Smith was not really a classical liberal after all, but more like a progressive liberal: his concerns for the poor, his worries about the damage that excessive division of labor can do to workers, and his criticisms of merchants and monopoly corporations indicated, to some at least, that he was as concerned with “social justice” as with plain old regular justice. While men sported Adam Smith neckties in Washington during the Reagan years, scholars were busy claiming Smith for the progressives. Some went so far as to claim that Smith was a proto-Marxist. Indeed, Murray Rothbard suggested that Smith’s apparent labor theory of value, his four-stages theory of human history, and his failure to understand marginal utility made him an economic dunce whose faulty analyses not only set the discipline of economics back a hundred years, but also paved the way and even perhaps bears some responsibility for the human tragedies wrought by Marxism and communism. Rothbard’s somewhat overheated assertions aside, one might still reasonably ask: Will the real Adam Smith please stand up?

Enter Samuel Fleischacker’s “philosophical companion” to WN. This book advertises itself as the first “philosophical” commentary on WN, and the back-jacket blurb from Charles Griswold, a noted Smith scholar and philosopher himself, states, “Until now, nobody has published a truly philosophical, let alone comprehensive and philosophical, commentary on Smith’s great work of political economy.” Given how much has been written about WN since its first publication, claims to comprehensiveness and absolute novelty certainly raise expectations, but Fleischacker’s book meets the expectations. It may not be entirely comprehensive—at least, not in the sense of commenting on everything in WN or commenting on it section by section—but it is an entire book written by a philosopher and dedicated to explicating and interpreting central themes in WN. Moreover, although Fleischacker’s claim that “thus far there has been no book devoted to [WN] by a philosopher” (p. xvi) is technically true, philosophers have paid considerable attention to WN recently (some of this work Fleischacker cites, some he curiously neglects). These qualifications notwithstanding, his mastery of WN as well as of other works by Smith, his own philosophical acumen, and his elegant writing style make the book well worth reading for anyone seeking to understand Smith’s contributions to political economy.

As Fleischacker states at the outset, he does not “defend any overarching thesis about Smith” (p. xv); rather, he raises by turns several philosophical issues of central concern to political philosophy or political economy—such as human nature, justice, and private property—and astutely shows, in more or less self-contained chapters, how Smith deals with them in WN. He also discusses Smith’s methodology, including what his example may offer economists and philosophers today, and what his political recommendations are. He considers whether Smith would be a conservative or liberal on today’s political scene. The book thus lends itself well to classroom use or to desultory reading, but its lack of a single thesis makes it somewhat difficult to review. Let me simply discuss briefly a few of the controversial claims Fleischacker makes, with the disclaimer that I pass over in silence many of the book’s interesting discussions and insights.

Fleischacker claims that Smith is a “proto-Wittgensteinian,” “common sense” philosopher (p. 23), falling philosophically and chronologically between Hume and Thomas Reid. Smith is not overly concerned with theory, but he does not reject it altogether; instead, he is concerned to elicit general rules from empirical observations, rules that are tentative and ever subject to revision upon further investigation and experience. He is not a “natural rights” theorist and has few, if any, principled arguments against state interference in individuals’ private activities (chaps. 8 and 9). His method is rather to look to history to see that things such as free trade and freely “gravitating” market prices allow the most efficient allocation of resources and makes policy recommendations accordingly. Hence, Fleischacker argues persuasively that Smith is not properly part of the natural-law or natural-rights tradition associated with people such as Pufendorf, Grotius, and Locke, despite similarities in conclusions.

That view would seem to make Smith something of a utilitarian, as Fleischacker himself suggests when he has Smith asking rhetorically, “Why not simply use whatever means are available to solve a problem?” (p. 275). Yet Fleischacker elsewhere claims that “Smith’s moral theory is deeply opposed to utilitarianism” (p. 47, cf. p. 145), and he argues at some length that Smith cannot properly be considered a utilitarian (chap. 3). In the 1759 Theory of Moral Sentiments (hereafter TMS), Smith argues that moral standards are ascertained by asking what an “impartial spectator” would or would not approve in any given situation. For Fleischacker, this argument shows that Smith “is not a relativist,” but he then claims that Smith “has no resource for distinguishing between the ‘right’ and the merely ’historically conditioned’ responses of an impartial spectator” (p. 169). The Smithian impartial spectator is a historical generalization, the joint product of countless actual spectators’ decisions in countless actual situations. He is thus an idealization, but, crucially, one based in reality. Like prices, the impartial spectator’s judgments change over time and reflect our evolving social reality, but they are nonetheless real and not subject to any one person’s whim. Thus, Smith is neither a radical subjectivist nor a moral transcendentalist: his moral objectivity occupies a “middle way,” reflecting the fallible but empirically grounded results of human beings’ investigation into what rules, protocols, and mores allow them to satisfy their interests best.

So Smith is a broad utilitarian after all, which gives him just the “resource” Fleischacker claims is missing to distinguish between “right” and merely “historically conditioned” moral norms—namely, utility. When Smith in TMS argues that utility is not what immediately recommends to us our moral judgments, he does not thereby imply that utility is irrelevant to those judgments. In his view, our usual method of determining an action’s moral rightness or wrongness is whether it comports with what the impartial spectator would judge, but the impartial spectator’s judgments are themselves informed by an evolutionary process that gradually changes them. So Smith is a nuanced utilitarian: he believes that we generalize rules of conduct based on our perceptions of actions’ utility or disutility and that these rules receive definite expression, subject to future emendation, in the persona of an impartial spectator. This method strikes me as fulfilling perfectly Smith’s desire to emulate Newton by balancing principled theory with empirical reality.

This account also fits with Smith’s conception of “justice,” which, on the one hand, as Fleischacker rightly notes, Smith describes as comprising the three simple, inviolable rules of respecting others’ life, liberty, and property, but which, on the other hand, he seems to allow the state to transgress when circumstances warrant. Those circumstances, according to Smith, arise in regard to policies or activities that would benefit everyone but would not repay private investment—projects such as canals, roads, and partially subsidized elementary schools—and in regard to a handful of other measures whose purpose is to alleviate the mental “torpor” Smith thinks workers would develop and the lack of respect the poor would get in commercial societies. Fleischacker discusses these matters at length (chaps. 8 and 10) and concludes that Smith cannot rightly be considered a “right-wing” thinker: “I am inclined to think Smith’s strong moral concern for the poor, and view of them as equal in decency and desert to everyone else in society, would have led him more toward the left than the right of [today’s] political spectrum” (p. 265).

Fleischacker correctly reminds us of Smith’s genuine and abiding concern for workers and the poor, and he seems right to suggest that Smith believed the poor often did not get the dignity and respect they deserved. It does not follow, however, that Smith resides on the “left” of the political spectrum: people on the “left” are not the only ones concerned about the poor. Moreover, Fleischacker’s claim that “those who call themselves ‘libertarians’ generally complain about unions but not about corporations, make all sorts of excuses for government activity taken in the name of defense, and suggest, without apparent concern for the justice and safety issues that Smith recognized, that education and transportation be put entirely in private hands” (p. 269) reveals only his own lack of knowledge about contemporary libertarian thought.

Fleischacker’s somewhat fanciful speculations about what policies Smith might recommend were he alive today—state-generated and state-enforced pollution standards, mandatory 5 percent of lifetime earnings paid by companies to any worker they fire, a mandatory “bicameral form of governance” for corporations “in which one chamber would consist of employee representatives along with representatives of the communities in which firms are located, while the other chamber continue[s] to consist of stockholders” (pp. 273–79), and so forth—seem to betray one of Smith’s central principles: no third party can know what actions you and I should take to serve our interests best. In both TMS and WN, Smith repeatedly trumpets the folly and viciousness of would-be rulers who falsely believe they possess the requisite knowledge to make such decisions for others. Indeed, this insight is one of the central reasons Smith recommends limiting the power that the state and its minions have over ordinary individuals. Fleischacker shows elsewhere (for example, chap. 11, especially pp. 233–36) that he is aware of this Smithian insight, but in making his own policy recommendations he apparently does not appreciate the full force of Smith’s charge.

By expressing some of my reservations about Fleischacker’s interpretations, I may have given the impression that the book has little to recommend it. In fact, however, I learned a great deal from it. I recommend in particular Fleischacker’s treatment of Smith’s philosophy of science (chap. 2), his discussion of self-interest in TMS and WN (chap. 5), and his treatment of the meaning of the phrase “invisible hand” (chap. 7), and I found all of his discussions enlightening in one way or another. Anyone interested in understanding Smith can profit from thinking through the issues Fleischacker raises. This book thus does an important service both to Smith’s writings and to those who are interested in them.

James R. Otteson, Jr.
University of Alabama
EconomistsEconomyGovernment and PoliticsLaw and LibertyPhilosophy and ReligionPolitical Theory
Subscribe Buy This Issue Get the App