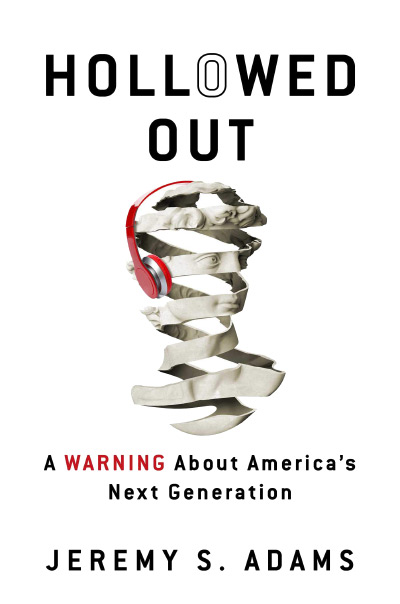 Hollowed Out
A Warning about America’s Next Generation
By Jeremy S. Adams
Kindle Hardcover Paperback Audiobook Audio CD
This book review is a web exclusive for the Summer 2022 issue of The Independent Review.

My ninth-grade civics teacher did her job very well. Civics is usually defined as the “study of the rights and obligations of citizens in society” and she was systematic in explaining these core ideas of the American republic. She had a talent for methodically outlining key concepts and historical facts to ensure that we would learn them. We read the U.S. Constitution, including the Bill of Rights, line by line and had to memorize things like the names of all the cabinet departments and their responsibilities. In retrospect, however, we made her job easy because most of us were there to learn and—more importantly—we, our parents, and virtually everyone else who influenced us agreed with her that all-in-all the country worked better than almost any in history. The rules of the game—the rules she was explaining to us—mattered and institutions like them were one of the keys to national success. It was the bicentennial year and, despite the fact that Saigon had fallen the previous spring, we cared about the greatness of the country, expected the country to live up to its high ideals, looked forward to a bright future, and shared time-tested moral commitments.

Jeremy Adams, who has taught civics in Bakersfield, California for twenty-five years, has a much more difficult job. He argues in Hollowed Out that today’s students and much of the generation that preceded them don’t share these aspirations and commitments. Many of them “seem mysteriously barren of the behaviors, values, and hopes from which human beings have traditionally found higher meanings, grand purpose, or even simple contentment—and little that is worthwhile has filled this vacancy” (p. 2). They have become self-absorbed, nihilistic, and lonely. “They accept, often without even thinking about it, that the past is not only irrelevant but wrong; they accept the postmodern conceit that the self does not need instruction. The modern self needs only validation and is not ashamed of seeking satiation” (p. 11). “In the reflection of the Almighty Mirror, where the young behold themselves. . .there are no universal laws of moral behavior, the self is not to be judged; and there is no purpose, no telos, no higher goal after which we should strive” (p. 12). This is largely because “at every level, institutions that restrained the excesses of individualism in the past are now in retreat” (p. 12).

This may seem like the same complaint that older generations have been making about youth throughout much of history, but Adams adds disturbing numbers documenting the rise of depression, suicide rates, loneliness and sheer detachment from commitments and connections among younger people. For example, a YouGov poll found that about a quarter of Millennials could not name a single friend. In 2012, 49 percent of teenagers ranked “in person” as their favorite way to communicate, but just six years later the number had fallen to 32 percent.

Like Mark Bauerlein (The Dumbest Generation Grows Up: From Stupefied Youth to Dangerous Adults, 2022,New York: Regnery), Adams argues that our response to modern technology bears much—but certainly not all—of the blame. Instead of making cell phones, the internet, and social media part of a balanced diet, young people (abetted by their parents) have become addicted—frittering away their irreplaceable time. Many cannot tear themselves away from their devices long enough to enjoy meaningful interactions, despite the fact that “more than 60 percent expect they would be healthier and happier without cell phones, and more than 40 percent wish they had the self-discipline to shut off their devices and quit social media” (p. 17). They may not be wrong in thinking this, as a recent experimental study published in the American Economic Review (Hunt Allcott, Luca Braghieri, Sarah Eichmeyer, and Matthew Gentzkow, 2020, “The Welfare Effect of Social Media,” 110, no. 3: 629 – 76) finds that those randomly selected to deactivate Facebook for four weeks in 2018 reported an increase in subjective well-being—by an average of 0.09 standard deviations, which is about 25 to 40 percent of the effect of psychological interventions including self-help therapy, group training, and individual therapy. About 80 of the treatment group agreed after the fact that deactivation was good for them. The experiment showed that Facebook time was reallocated to a wide range of other activities, including spending more time with friends and family members. Another recent study (Scott Wallsten, “What Are We Not Doing When We’re Online?” National Bureau of Economic Research Working Paper no. 19549) estimates that on the margin each minute of online leisure time is correlated with 0.12 fewer minutes sleeping—another problem facing younger generations. Lack of sleep saps the body’s immune system and causes a wide range of physical and mental health problems, as Matt Brown ably (and startlingly) demonstrates in his TED Talk, “Sleep Is Your Superpower.”

In successive chapters, Adams insightfully discusses the “hollowing out” of selves, culture, schools, families, and democracy. Perhaps the most significant of these is the transformation of families. “Getting married, as traditionally understood, was entering a covenant. By becoming spouses, a man and a woman were no longer children focused solely on their own pleasures, but adults ready to be half of a perpetual partnership, ready to make individual sacrifices for the benefit of their newly formed family. . . .[However], in a culture that prizes autonomy of the self over all other values, that judges institutions, relationships, and activities through the prism of a shrill and hollow individualism, that aims for ‘hedonistic luxuriating,’ it should come as no surprise that an institution requiring so much selflessness and framed on an emotional architecture of endless commitment and sacrifice. . .is going to inspire a mob-like retreat powered by potent generational scorn” (p. 77). One manifestation of this transformation is reflected in a recent Deloitte survey that reports only 39 percent of Millennials want to get married and have children. Another manifestation is the decline of the family dinner. As Adams explains (p. 92):

The idea of the “family dinner” as a thing, a phrase, a way of life, is something many of my students know nothing about.

If I ask, “how many of you sit down and eat dinner together with your family?” almost no one will raise a hand.

If I follow up by asking, “Then how do you eat dinner?” the almost universal response is “Oh, we just warm up some food and take it to our rooms.” [Where they often pretend to study while wasting time online.]

“Where are your parents?”

The kids are home alone—even when their parents are there.

Adams’ book is primarily a warning. There cannot be any easy fixes for this mess. He recommends a return to older models of education, such as studying the Founders and the classics (akin to the Independent Institute’s 490 B.C. Project)—a model of schooling and parenting that gives young people the “greatest gift ever given to them: the gift of high expectations coupled with a belief in individual agency” (p. 128). “We wrongly flatter our students, we let them rest in ignorance, if we do not teach them that America’s ideals”—the ones that I learned about in civics class—“are worth defending and that history is always complex and, yes, often disappointing. In moments of exasperation, I want to say, ‘No, the men and women of 1776 or 1787 or 1865 or 1945 or even 2015 did not have the same gender-racial-sexual values as a . . . student from 2021. Grow up and stop expecting them to! Raging at statues and dead people is easy. Understanding is hard” (pp. 125 – 26, emphasis added). He might have added, “and you will better understand yourself and how to achieve greatness if you set this higher standard for yourself.”