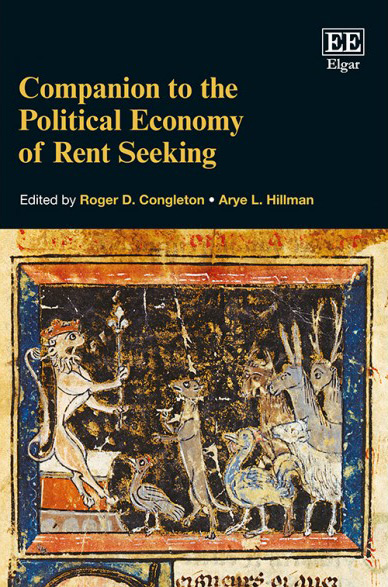 Companion to the Political Economy of Rent Seeking
Edited by Roger D. Congleton and Arye L. Hillman
Hardcover
This book review appeared in the Spring 2017 issue of The Independent Review.

Rent seeking is a foundational aspect for the field of public choice, and its incorporation into mainstream economics has become commonplace. Companion to the Political Economy of Rent Seeking offers a collection of overview articles on various aspects related to rent seeking, following the recent publication of reprints contained in the two-volume work 40 Years of Research on Rent Seeking (Berlin: Springer, 2008), compiled by the same editors (along with Kai Konrad). The editors have put together an impressive volume that should be of interest to both those new to the subject and those looking to round out their knowledge of particular aspects of the vast literature on rent seeking.

The volume comprises five parts. It opens with a brief introductory section containing two short chapters written separately by each of the editors. Roger Congleton’s chapter is an interesting read that relates evolutionary survival to rent seeking but does not serve the normal purpose of introducing the concepts developed in the later chapters. Arye Hillman’s chapter contains a brief introduction to contests, the subject of part II, and single paragraphs on the concepts of rent extraction and rent creation. Further development of the importance of these latter issues could have been beneficial to attract a wider audience. Especially useful would have been referencing the debate over the definition of rent seeking. It is not clear to me whether it has yet been settled. Some invoke a very narrow definition of resources used to influence policy that has negative social value, whereas others consider rent seeking that may also involve only private parties or can have social benefits. Most of the contributing authors seem to rely on the most narrow of the definitions, but not all of them do, which somewhat limits comparability across chapters. This becomes particularly problematic in part III, in which each chapter covers rent seeking in a particular country or region. The separate authors do not always utilize the same definition, with some chapters discussing a narrower type of rent seeking. A synopsis of this section would also have been useful to highlight for the reader where rent seeking seems to be most prevalent in the world.

Because rent seeking is not easily measured, much of the theoretical literature has tried to determine how much of the potential rents are expected to be used up in the process of rent seeking. The simplest case of rent seeking entails free entry of identical risk-neutral rent seekers vying for a fixed prize of known value V. If the winner is determined proportional to each rent seeker’s outlay, then in equilibrium each of the n rent seekers will spend exactly V(n - 1)/n2, and the rent collectively dissipated through the rent-seeking process is equal to V(n - 1)/n, which approaches V (full dissipation) as n goes to infinity. This conclusion, though, depends on a number of critical assumptions and is the focus of part II, which covers rent-seeking contests.

With one exception, each of the volume chapters is newly commissioned. Yet part II begins with the republication of a survey article by Ngo Van Long, deriving equilibrium effort and dissipation levels under various scenarios, which appeared in the European Journal of Political Economy just two years earlier. There is no explanation given for including this one reprint, but the article does serve as a useful introduction to the more narrow topics covered in the rest of the section, including both homogeneous and heterogeneous valuation, complete and imperfect information, risk neutrality and risk aversion (but not risk seeking), and endogenous determination of rent valuation by the rent setter. So perhaps the editors did not see the need to reinvent the wheel with a newly drafted chapter that would cover the same literature. The only missing content from this review article that appears in another of the contest chapters is behavioral aspects, the focus of part II’s final chapter, by Roman M. Sheremeta. This concluding chapter tackles the question of why overdissipation can occur if everyone is assumed to be rational. Sheremeta presents four possibilities: (1) there is additional utility gained from becoming the winner; (2) agents maximize relative utility (rather than absolute utility); (3) imperfect strategy is imposed by bounded rationality; and (4) systematic mistakes are caused by biased belief of overvaluing the marginal contribution of one’s own effort. Each explanation is supported, at least in part, by referencing laboratory experiment studies (mainly by the chapter author and his coauthors). However, the simplest explanation is missing. If exact dissipation occurs under risk neutrality, and underdissipation results from risk aversion, then overdissipation is the implication of risk seeking behavior. Risk neutrality is a standard economic assumption for tractability. Risk aversion is often assumed to be more realistic, which it surely is for the typical person, but rent seekers are not typical. Rather, they generally represent entrepreneurs, who can reasonably be presumed to be risk seekers, at least in some contexts.

The chapters in part II are heavily theoretical, formally deriving many of the equilibrium results. (The exception is the chapter on sabotage by J. Atsu Amegashie, where all derivations are held back for a technical appendix.) In contrast, part III, “Applications and Outcomes,” represents descriptive accounts of the literature. Two of the seven chapters in this part were of particular interest to me. In chapter 11, William F. Shughart and Diana Thomas combine implications from Gordon Tullock’s and Mancur Olson’s work (but also incorporating aspects of George Stigler’s capture theory) in discussing how regulation is a form of redistribution that typically benefits small organized groups at the expense of larger (latent) groups that face higher prices. They also recognize that redistribution can occur even within a given industry if firms differ in their production techniques. The discussion is supplemented with several mini–case studies of regulation and deregulation benefiting firms unequally. Deregulation is argued to occur due to strong nonprice competition or technological innovations outpacing the regulatory environment. Although the authors do a credible job in detailing the outcomes of policy (new rents or loss of rents), what is missing here is the smoking gun of firms promoting these regulations or deregulations through lobby activity (which Shughart and Thomas seemingly acknowledge by quoting Stigler: “it is fruitful to assume that the real effects were known and desired ” [p. 179, emphasis added by the chapter authors]).

Chapter 15 on the political economy of aid, by Rune Jansen Hagan, is a very detailed consideration of rent seeking by both donors and recipients and of the chains connecting them. This chapter represents a balanced portrayal of aid despite the potential for rent seeking. The chapter is also more general, covering a variety of political economy issues relating to aid, aid agencies (both governmental and nongovernmental), motivations, disbursements, and measurement.

Part IV contains seven chapters presenting applications of rent seeking in the United States and Europe, Russia, Africa, China, India, and Greece. Geographically, only Latin America appears to have been overlooked (Kurt Weyland has published several studies on this region). As a bonus, the final chapter, by George Tridimas, presents an historical accounting of rent seeking in ancient Athens. Inclusion of the latter chapter made me hungry for more historical applications, such as on the development of the original U.S. Constitution based on the literature surrounding the work of Charles A. Beard or rent seeking during the Industrial Revolution.

Although I have presented some critical remarks as part of this review, I do not wish to the leave the reader with a negative impression of the volume. I enjoyed reading most of the chapters and believe that even those readers well immersed in the literature on rent seeking will have much to take away from the book. I will be ure to refer back to it from time to time as the need arises.