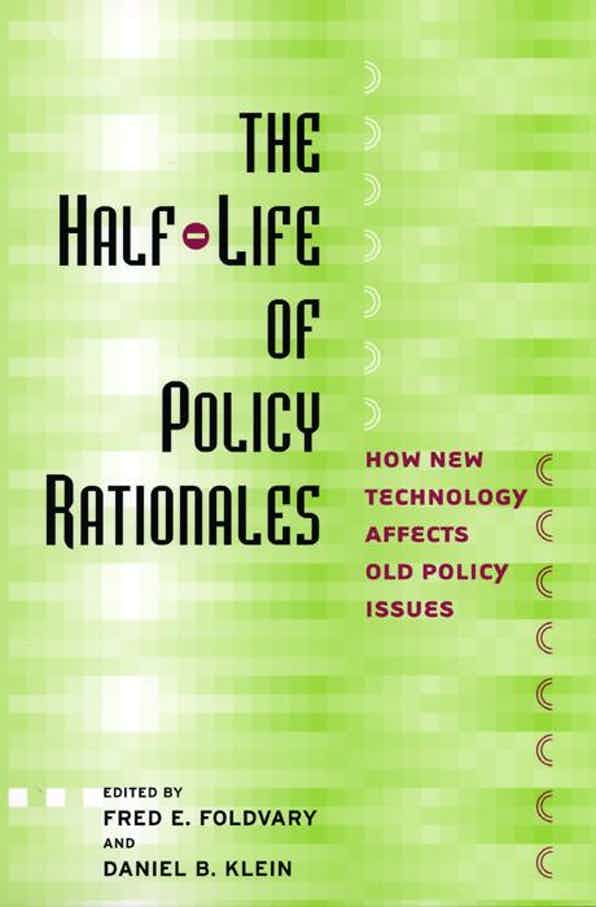 The Half-Life of Policy Rationales
How New Technology Affects Old Policy Issues
Edited by Fred E. Foldvary and Daniel B. Klein
Kindle Hardcover Paperback
This book review appeared in the Winter 2004/05 issue of The Independent Review.

The Half-Life of Policy Rationales is one clever book. Nothing in recent years on the economics of new technology comes close. Fred Foldvary and Daniel Klein immediately separate their contribution from the dissonant chorus of half-baked predictions about how technology is “destined” to change age-old government policies:

[M]any have speculated on the government changes that technology will bring. But few have explored the changes that it ought to bring. This collection suggests that technological advancement ought to persuade policymakers to implement reform in the direction of free enterprise, but it does not predict that public policy will move in that direction. (One may hope that there is a direct connection between the ought and the will be, but that hope is so often disappointed!) (p. 2, emphasis in original)

The crux of their view is that many classic “market-failure” arguments for government intervention are out of date, predicated on obsolete technology. Most glaringly, textbooks often argue that X is nonexcludable, therefore a public good, therefore in need of government provision. Nonexcludable, however, really means “not excludable at reasonable cost,” and exclusion technology has improved enormously. Computer chips, scanners, and global satellite positioning are only the beginning.

Contributors to the collection illustrate this lesson by using the examples of fisheries, lighthouses, toll roads, parking, and auto emissions. In each case, they review technological advances that weigh heavily in favor of less regulation or even laissez-faire. Thus, in a chapter on roads, Peter Samuel explains that paying tolls no longer need be the painful experience familiar to every hapless traveler on the Garden State Parkway. Cars can now be equipped with a twenty-dollar transponder (seven- to eight-year battery life) that electronically handles the whole process without even requiring the driver to slow down. The toll booth transmits a signal, the transponder replies, and the charge magically appears on the driver’s next credit-card statement. This technology is already in use, and it opens up a world of entrepreneurial possibilities, such as peakload pricing during rush hour, premium services, and flexible traffic-light timing.

The contributors also maintain that new technology undermines regulation of product quality. They are probably right, but their arguments are less compelling than those based on new exclusion technology. They make a plausible case that the Internet and related innovations make it easier for consumers to judge quality for themselves. The authors apply this lesson to banking, consumer protection, and medical licensing. (The chapter on medical licensing for the most part overlooks the possibility that a little more knowledge may be a dangerous thing. Recent research on doctor’s “report cards” finds that medical providers become less willing to take sicker patients out of fear of hurting the “grade” they may receive [see David Dranove, Daniel Kessler, Mark McClellan, and Mark Satterthwaite, “Is More Information Better? The Effects of ‘Report Cards’ on Health Care Providers,” Journal of Political Economy 111 [2003]: 555–88].) Somewhat surprisingly, there is no chapter on e-Bay. One leftish economist I know admits that his positive e-Bay experiences convinced him that he underestimated the market’s ability to cope with imperfect information.

The chapters on water (by engineer Alvin Lowi) and electricity (by Alvin Lowi and Clyde Wayne Crews) are more difficult to judge. In both cases, the thesis is that scale economies in water and electricity have long been overestimated and are now wildly inflated. Given current technology, it would be cost-effective for individual residences or small clusters of residences to process their own water and generate their own electricity, but various regulations hold back progress. For example, if you exit the electric grid in California, you must continue to pay the power company an amount based on your own generating capacity, to help it recover its historic costs! Lowi and Crews protest that “[t]he arrangement is rather like a restaurant exacting monthly tribute from local residents on the grounds that it had to invest in building the restaurant and that it incurs current costs in continuing to provide residents with the option of going to the restaurant” (p. 176). If the calculations for water and electricity are correct, one can only exclaim: wow! Unfortunately, in this area it is difficult for a lay person to check the math—to distinguish science from wishful thinking with confidence. These chapters would have been much more compelling if the authors had surveyed a random sample of specialists and included the results. Then readers would at least know if they were reading about controversial policies based on consensus science or controversial policies based on controversial science.

My personal favorite in this volume is “Buying Time at the Curb,” Donald Shoup’s chapter on parking. It ranks as one of the ten most engaging pieces of economic analysis I have ever read, in the same ballpark as Bastiat. It begins by reviewing the basic economics of pricing a fixed quantity with variable demand. No matter what popular prejudice says, the truth is that higher prices are often good for buyers as well as for sellers. A “free” good that you cannot get is worse than an expensive product that you can.

To handle congestion, local governments typically force new firms to create one new parking space for every new customer. This sounds like common sense, but Shoup shows that it is anything but:

economists do not define the demand for food as the recurring peak quantity of food consumed at all-you-can-eat-for-free buffets where diners eat until the last bite has zero utility. And economists do not say that this recurring peak quantity of food eaten must be supplied, whatever the cost. Yet planners do define the demand for parking as the recurring peak number of spaces occupied when parking is free. Planners do require this number of parking spaces to be supplied, no matter what the cost is. (p. 64, emphasis in original)

In this perspective, it is obvious that even given old-fashioned meters, parking in congested downtown areas has long been underpriced. Shoup then reviews the powerful new metering technologies now available. One simple innovation is multispace, or “pay and display,” meters. A single machine takes money and issues parking receipts for twenty or thirty spots, flexibly allowing for variable parking time and peakload prices. A more sophisticated alternative is the personal in-vehicle meter, also known as an “electronic purse.” When you want to park, you punch in the local code, and hang this calculator-size liquid crystal display inside your car. A timer automatically debits your account until you return and turn the meter off. The benefits of these technologies can be and have been enhanced with “networking” (electronically linking meters to allow parkers to add time to their meter from a remote location or making their “electronic purses” valid in a wider region).

Shoup also makes the more difficult argument that paying for parking is a good idea that will actually happen. Unlike many technological determinists, though, he at least has an example. The city of Aspen bitterly resisted in-vehicle parking meters at first. The measure even provoked a “honk if you hate paid parking” rally. Less than a year later, however, paid parking was supported three to one in municipal elections. Perhaps, Shoup grants, this support arose because most of the people paying to park in Aspen are nonvoting tourists. To make paid parking palatable in the rest of the country, he advocates earmarking the parking revenue to provide public goods for the surrounding neighborhood.

I do not share Shoup’s optimism. Economists are unusually influential at George Mason University, but I would be shocked if the university administration took to heart our near-unanimous conclusion that commonsense economics can solve our parking shortage virtually overnight. That local governments across the country, with far less patience for economics or economists, will reform sooner is most unlikely.

Foldvary and Klein’s collection underscores the folly of technological determinism in which good new ideas inevitably triumph. After at least a few years of neglect of an idea, we usually infer that “If it were really such a good idea, it would already have been adopted.” When the political process separates the status quo and progress, however, it is silly to stand by this syllogism. If public opinion opposes paid parking, it is not going to happen, no matter how sensible the proposal. It is all the more important, then, for people with good ideas about public policy to promote them energetically, because that promotion is often the only hope those ideas have.