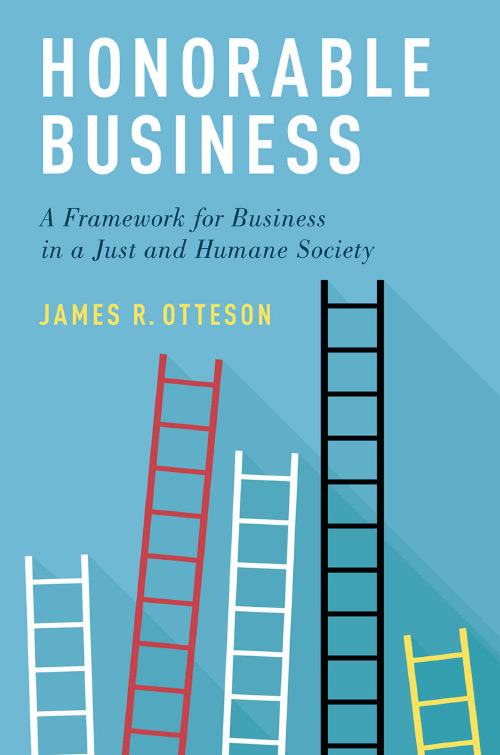 Honorable Business
A Framework for Business in a Just and Humane Society
James R. Otteson
Kindle Hardcover Paperback
This book review appeared in the Summer 2020 issue of The Independent Review.

Honorable Business: A Framework for Business in a Just and Humane Society is an ambitious and worthwhile undertaking. In it, James Otteson, director of the Eudaimonia Institute at Wake Forest University, presents both a reasoned defense of commercial society and a useful guidebook for those individuals who participate in commercial life. He argues that one can simultaneously pursue commerce and the betterment of society and self. He presents the reader with solid arguments that ultimately promote and defend commerce. All the while, Otteson pays close attention to the individual as the ultimate actor and notes that to succeed at a societal level, individual actors must internalize the practice of “honorable business.” Otteson strives to join the individual pursuit of Aristotle’s eudaimonia—genuine human flourishing— with the bounty of the market.

This is not your traditional “business ethics” book, a genre I nearly always find contrived, superficial, and ultimately unsatisfying. Another jejune overview of opposing philosophical perspectives followed by a collection of case studies is not going to move the cause of markets forward. Otteson’s book can. He provides a consistent, philosophical defense of business within the context of the individuals who practice it.

Ayn Rand’s claim that utilitarian defenses of capitalism fail philosophically is true. Otteson provides a clear, concise alternative to Rand’s objectivism, particularly for those who embrace methodological subjectivism in economics. He employs utilitarian arguments when referencing the benefits of capitalism to society (e.g., capitalism produces higher standards of living), but his overall argument is rooted in the individual Aristotelian pursuit of eudaimonia.

What is true for markets is true for any institutional setting: bad actors (those eschewing eudaimonia) damage the reputation and operations of the institution in which they act. This is as true in religion and government as it is in business, Thus, Otteson starts by addressing the role that business—as an institution—ought to play. His framework is “a properly functioning market economy” in pursuit of “a just and humane society” that “creates value” through the practice of “honorable business” (p. 4).

The second chapter draws upon Otteson’s previous work on eighteenth-century philosopher and economist Adam Smith. Otteson skillfully weaves the reader through Smith’s distinction between justice and beneficence. In the process, he develops a benchmark for his argument framed in “Smithian justice,” which he refers to as the “three P’s”: the protection of person, property, and promise (or contract). The chapter closes with a discussion of the duties of government, society, and the individual actors within a market society. These last sections are linked and quite powerful in that they address specific duties and obligations for all three.

Chapter 3 sets out a clear “code of business ethics.” I find this code to be particularly refreshing in a world of concisely worded yet ultimately vacuous corporate mission statements that do little to provide clear, tangible guidelines for individual moral action. Otteson provides five specific and clear guidelines for individual moral behavior by practitioners of business. Each of the five is linked to the protection of person, property, and promise, and all five begin with the pronoun you. This form of direct address drives home the point that institutions do not act: the individuals who populate them do. All actions are constrained by the dictum to provide the same respect for the autonomy and dignity of the individual that you confer upon yourself.

Chapter 4 tackles inequality, unfairness, externalities, price gouging, psychological manipulation of emotion and desire (modern marketing), profit, and social responsibility. Each section takes into account the perspectives of moral behavior held by individuals. Throughout the book, Otteson notes that support formarkets must overcome a fetish for perfection andmust not turn a blind eye to either costs or benefits. Expecting or assuming human infallibility or perfectibility is an alluring and common mistake.

Chapter 5 could easily stand alone as an overview of the history of material progress. Otteson lays out a clear account of the impressive human progress that has been clearly associated with and, I would argue, caused by the advancement of commercial, bourgeois society. Here Otteson argues that the widespread ability to achieve personal eudaimonia may depend on material progress. His framework is not hedonistic: he acknowledges “money” as a means rather than as an end. Crass, commercial materialism is not suggested to constitute genuine human flourishing. Yet he also rightfully dismisses a commonly heard complaint today—that we have “too much stuff” and “too much choice.” A growing, intrusive state that thwarts and subsumes individual choice represents a violation of individual autonomy and agency. Unless adults can make the decisions about their own lives, how can they strive toward eudaimonia? Otteson refers to the importance of the process of learning by decision making and argues that when others relieve us of our agency, they denigrate and damage our ability to develop personhood.

Chapter 6 speaks to the problems one confronts in “achieving the purpose of business.” Capitalism is often used as a pejorative, inequality-based term. Its effect, if not intent, is to situate capital and labor as strict substitutes while ignoring their complementarity. Perhaps this is one of the reasons for the lasting use of the word in the political sphere! Otteson, like others, alludes to the problem with the term capitalism and suggests using the term eudaimonism, which is probably more philosophically descriptive though hardly less obscure and cumbersome in its ability to reach widespread usage. Eudaimonism does, however, better capture Otteson’s project.

Marxist “alienation,” lying, exploitation, and asymmetric information between consumers and sellers are generally often listed as persistent and substantial problems. He argues that his code of ethics and the individual pursuit of eudaimonia help to address each concern and that we should appreciate the incentives brought to bear on bad actors by market competition. In the end, he acknowledges an overlooked truism inherent to any human institution: there is no “perfect” system because imperfect human beings populate all institutions. Our institutions inevitably reflect humankind’s inherent moral frailty and lapses.

In chapter 7, Otteson introduces the more perennial than formidable criticisms of British Marxist G. A. Cohen. He refutes Cohen’s arguments that capitalism damages equality and community and proffers and explains positive ways that commercial exchange feeds and sustains both. In contradistinction to Cohen’s luck-egalitarianism framework, Otteson provides a compelling case for respecting the moral agency of individuals, noting that “exit” is an omnipresent option under moral agency. He addresses those “forgotten men” who pay the bill: the obviously neglected part of humankind in the quest for “evenness,” “fairness,” or “social justice.” Moral agency and the rights to expect the protection of person, property, and promise extend to all, not just to politically selected groups where the politics of special interests are likely to overweigh truly equitable treatment. The chapter documents actual, as opposed to intended, results of the large-scale government assistance programs that dominate current federal spending, such aMedicare, Medicaid, and Social Security. Otteson then addresses transition problems and the real losses suffered by those subjected to Schumpeterian “creative destruction.”

In chapter 8, Otteson examines two significant charges: first, that markets sully moral behavior by providing things that should not be for sale (e.g., kidneys, sex, and illicit drugs) and, second, thatmarkets, if not outright immoral, are certainly amoral. Apparently, the fact that institutions reflect the desires of people is a significant obstacle for some policy makers and voters. Otteson notes the sheer paternalism that underpins these arguments.

This book embodies a continuation of work that Otteson has been doing for many years: defending market exchange is never-ending, arduous work, after all. To reiterate, the book has two great strengths: (1) Otteson provides a crystal-clear recognition that a moral defense of markets is both necessary and well founded, and (2) his book is useful. Otteson notes that his code of business ethics is a series of “don’ts.” Being inherently rooted in the concepts of negative rights, individual freedom and agency, and the protection of liberty makes the book quite practical as a field guide.

My only minor criticism is that I was left wondering about Otteson’s perspective on the role of relative income comparisons in people’s emphatic urge to criticize capitalism. What role does envy play, and what are the effects of increasing absolute wealth upon the intensity of personal envy? I would argue that those outside of wealth production are the persons most intensely focused on wealth and income. My ad hoc observation is that wealth producers, unlike those who envy them, focus not wealth or income but rather on achievement and risk. The entrepreneur’s brain is driven not by wealth and income but by the eudaimonia associated with “project making” (see, for example, Loren E. Lomasky, Persons, Rights, and the Moral Community [London: Oxford University Press, 1990]).

Attempting to overcome the gap “between instinct and reason” (to borrow a phrase from F. A. Hayek in The Fatal Conceit: The Errors of Socialism, ed. W.W. Bartley III [Chicago: University of Chicago Press, 1988]) is an impossible path for most of us. However, in the broadest of terms it is the path we must take for the advancement of all humankind. Otteson’s book represents a contribution to our understanding of the benefits of taking that path. In the end, Honorable Business is a necessary guide for academics and businesspeople alike.