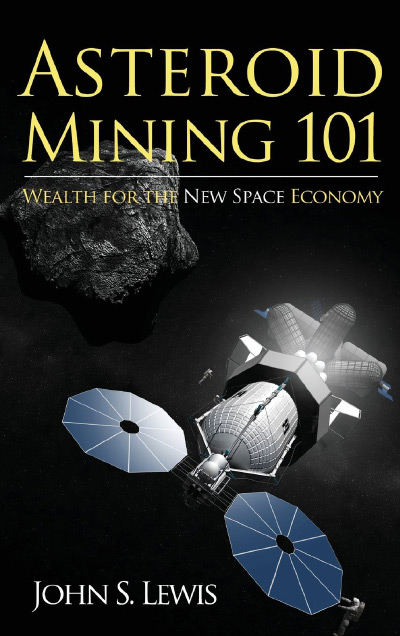 Asteroid Mining 101
Wealth for the New Space Economy
By John S. Lewis
Hardcover
This book review appeared in the Winter 2015/16 issue of The Independent Review.

John Lewis has written an incredibly informative book on the scientific, logistical, and business-related aspects of asteroid mining. Deep Space Industries, the publisher of the book, is poised to begin offering commercial space services in 2016, with a long-term view of profitably mining asteroids. Planetary Resources, another company founded with the eventual goal of asteroid mining, has a similar timeline. The presence of multiple firms already competing for a share of what seems to be a fantastic market is heartening and fulfills possibilities raised in previous accounts of private-sector developments in space (see, e.g., Lewis D. Solomon, The Privatization of Space Exploration: Business, Technology, Law, and Policy [New Brunswick, N.J.: Transaction, 2012]; Edward L. Hudgins, ed., Space: The Free Market Frontier [Washington, D.C.: Cato Institute, 2003]).

The first seven chapters provide an outline of the composition and (orbital) locations of asteroids. This background knowledge is necessary to give context to the later chapters that more explicitly touch on business issues. The first chapter introduces readers to the idea of “geochemical differentiation,” whereby the different layers of Earth were stratified by extreme heat and eventual cooling in the early days of Earth’s planetary history (pp. 8–9). This history is important because it gave rise to the mining environment that exists on Earth: digging through top layers, where valuable minerals are scarce, to deeper layers, where concentrations of valuable ores lie. Most asteroids, however, never went through such a heating–cooling process, so even the surface layers are abundant in precious metals, such as platinum. This has profound implications, specifically technological, for how asteroid-mining operations will differ from mining operations on Earth.

Next is an overview of scouting missions that attempt to acquire information about near-Earth asteroids (NEAs), which are also potentially hazardous asteroids (PHAs) because they might collide with Earth. Scouting missions can be conducted relatively inexpensively by constructing and launching small satellites packed with sensors into low Earth orbit. The chapter also discusses the potential and difficulties of missions to land on and return to Earth with an asteroid sample.

After the discussion of NEAs and PHAs, Lewis offers a general crash course on meteors and asteroids. Chapter 4 covers meteors, detailing how they differ from asteroids, what they can tell us about the Solar System, their mineral composition, and what lessons they provide for prospective asteroid miners. Importantly, meteorites with appealing metallic content, “however rich their composition, present severe processing problems” (p. 61). Chapter 5 discusses the connection between meteors and asteroids, with special focus on NEAs. Chapter 6 goes into more depth on NEAs, including the technological feasibility of trips by spacecraft to and from NEAs. Chapter 7 is on the Asteroid Belt asteroids, covering their orbital population statistics, and mentions the intriguing possibility of spacecraft “hitching a ride” on an NEA to the Belt asteroids.

After the extended discussion of asteroids, the book shifts in emphasis to business and financial viability. Chapter 8 introduces the concept of “demandite”—“the sum of the elemental abundances of consumables that must be mined to support civilization” (p. 98)—as a measuring rod for determining the material needs of humans in space. The chapter also discusses the process for determining whether mining a particular asteroid for ore is profitable. Lewis estimates the total value of ores in the NEAs, at current market prices, at $222 trillion (p. 113). Of course, this estimate should not be taken literally—bringing these ores to market would obviously greatly decrease their price due to the massive supply increase.

The book’s final chapter, appropriately titled “The Long View,” discusses the logistics of future asteroid-related missions. Lewis provides a fourteen-point summary (p. 137) of the literature on the logistics of asteroid mining, the central theme of which is “the establishment of a permanent, self-sustaining human presence in space, deriving all necessary resources from accessible Solar System bodies and powered by the Sun” (p. 136). He finishes by emphasizing the rapidly falling costs associated with the technologies required to access and explore space, thus implying that the incredibly ambitious project outlined in the book, although only a future prospect, is not as distant as one might think.

The book has only a couple drawbacks. The first relates to the wealth of informa-tion the author provides. If anything, the amount of information on these topics is overwhelming. Even with the book’s coherent organization, it is difficult to process all the facts and statistics provided, let alone their implications. But this may be a blessing in disguise. Provided the book is used primarily as a reference work, the amount of information enhances the volume’s utility. The second drawback concerns the lack of a broader economic perspective, specifically concerning property rights. Under the Outer Space Treaty of 1967, signed by all the spacefaring nations, the possibility of private-property rights to space resources is unclear. Although this issue is not economically troublesome—institutions have emerged in similar “anarchic” environments to facilitate capture of gains from trade, so there is no reason to suspect they will not do so here (see Alexander W. Salter and Peter T. Leeson, “Celestial Anarchy: A Threat to Outer Space Commerce?” Cato Journal 34 [Fall 2014]: 581–96)—it may be a big problem politically (see James Clay Moltz, Crowded Orbits: Conflict and Cooperation in Space [New York: Columbia University Press, 2014]). It may be that a discussion on property rights would take the author too far afield from his stated purpose, but it does seem premature to insist on the commercial viability of private-sector economic activity in space without at least noting the legal difficulties. Fortunately, by highlighting the awesome economic potential of asteroid mining, Lewis has shown that a solution to this problem is more important than ever.