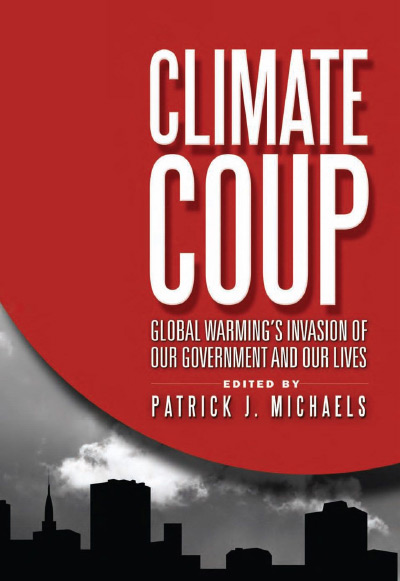 Climate Coup
Global Warming’s Invasion of Our Government and Our Lives
Patrick J. Michaels
Kindle Hardcover
This book review appeared in the Spring 2012 issue of The Independent Review.

Climate Coup is an important collection of essays. Although its editor, climatologist Patrick Michaels, is probably the best known of the “global-warming skeptics,” this book is not primarily about the science, but instead about the political economy of the hysteria over global warming. The essays in total describe how the politics and ideology of global warming have had a corrupting influence on science, education, international trade, foreign policy, and other areas. As Michaels points out in the introduction, “[G]lobal warming’s reach has become ubiquitous. . . . [It] has become a threat multiplier” (p. 1). He is not referring to the actual warming of the planet, but to the global-warming movement’s corrupting influence and its use of unsubstantiated or outright false claims to justify major expansions of government power. As Michaels concludes, “[W]e have witnessed a coup. Global warming has taken over our government and our lives” (p. 13). In assembling and editing these essays, Michaels aimed to produce an expose´ of these corrupting influences and how they have lead to this “coup.”

In addition to Michaels’s introduction, the book contains eight essays, all commissioned by the editor and each pertaining to a specific influence that global-warming politics has had on scientific and public decision making. If readers want to be selective in reading these essays, I suggest giving priority to chapters 1, 2, 3, 6, and 7. These essays relate, in order, to legal and constitutional issues, the current political/ legislative environment, the scientific process, the impact of global warming on developing countries, and claimed impacts on human health. I emphasize these chapters in this review. The remaining three chapters—on foreign policy, trade, and education, respectively—though interesting and worth reading, are less compelling than the other five. Space constraints dictate that I not discuss them here.

The first chapter, “The Executive State Tackles Global Warming,” by Roger Pilon and Evan Turgeon, takes a historical look at constitutional decision making to explain how we have arrived at a point where the U.S. Environmental Protection Agency (EPA) can grant itself the authority to centrally plan the U.S economy via the power to regulate carbon dioxide (CO2 ). This action was taken in spite of repeated refusals by Congress to support any regulations in this area.

Pilon and Turgeon describe a series of Supreme Court cases that step by step led to the destruction of the doctrine of enumerated powers and then to the non-delegation doctrine. These developments ultimately led, in combination with late nineteenth- and early-twentieth-century progressive ideology, to what the authors rightfully refer to as “the administrative state.” In essence, this “state” is an executive branch with the power to make and implement law independently with only the most tenuous congressional authority. Thus, we arrive at the Supreme Court’s 2007 decision in Massachusetts v. Environmental Protection Agency (549 U.S. 497), which decided that the EPA has authority under the Clean Air Act to regulate not only CO2 , essential for all life and a by-product of every production and consumption process known to man, but all so-called greenhouse gases. It also obligated the EPA to decide whether greenhouse gases are an “endangerment” to human health and well-being. As a result, on December 7, 2009, staging its own Pearl Harbor attack on individual liberty and the U.S. economy, the EPA issued its “endangerment” finding, declaring CO2 and other greenhouse gases to be pollutants. The EPA now has the option of regulating not only CO2 , but all greenhouse gasses, which, should it choose to do so, would include by far the most prominent greenhouse gas, water vapor. As Pilon and Turgeon conclude, “[W]ith demise of constitutional restraints during the New Deal and the massive expansion of congressional power that followed, much of it delegated to the executive branch, President Obama today faces very few obstacles in implementing the global warming agenda” (p. 41).

Editor Michaels is the author of chapter 2, “A Hot Political Climate: Recent Evolution of Global Warming Policy and Regulation.” Here he weaves together a review of both hard science and political science facts relevant to the global-warming debate. Although reviewing more recent policy initiatives—the failed Waxman- Markey cap-trade bill and what he calls the “Copenhagen fiasco,” which failed to come to any binding agreement to reduce greenhouse-gas emissions internationally— Michaels recounts a number of scientific facts that are important to the debate. Most important, regardless of what one believes about global warming, not a single policy that has been proposed will have any measurable impact on the climate over the next one hundred years (see the graphs on page 49 in the book). The set of proposed policies includes the Kyoto Protocol and Waxman-Markey, which would have forced U.S. emissions of CO2 per capita back to Civil War levels. These facts are not in dispute.

Michaels also provides an excellent review of the “climategate” scandal, including a clear and understandable account of “hide the decline” and the collusive agreement among ideologically motivated climate scientists to perpetrate the “hockey stick” fraud on the public and the political process (the scam’s name referring to the shape of a graph using manipulated data). The latter occurred via the United Nations’ Intergovernmental Panel on Climate Change (IPCC), which has been more than willing to fudge scientific data in order to push its member governments’ political agendas.

Chapter 3 is by Ross McKitrick, economist, statistician, and coauthor of several articles with Michaels. McKitrick describes how the IPCC has corrupted the editorial and peer-review process of the top climate journals. To challenge the conclusions of the IPCC is to not get published, regardless of the quality of the research. As McKitrick concludes, “[I]f I were a young climatologist I would have learned that my career prospects would be much better if I never wrote papers that question the IPCC” (p. 71).

McKitrick discusses much of this subject in terms of his own frustrations in seeking publication of research that challenges the credibility of data used in climate models relied on by the IPCC and the statistical methods that these models invoke. The reason this matter is important to the public at large and not only to scientists is that it pertains to the science that undergirds global-warming policy. As such, it is costing the public hundreds of billions of dollars in taxes and regulations, with the potential for that cost to increase into the trillions.

Chapters 6 by Indur Goklany on developing countries and chapter 7 by Robert Davis on the alleged health effects of global warming are closely related and should be read together. Dire health effects, predicted by alarmists, are expected to affect developing countries the most, and issues such as future economic growth and agricultural production, covered by Goklany, will drive these health effects. What is most valuable about these two chapters, in addition to their insights about how alarmists ignore reality to make their case, is the shear volume of information the reader is given. The data show that doom-and-gloom predictions of future trends in mortality, malaria, air pollution and respiratory disease, crop yields, water shortages, hunger and starvation, and poverty, among others, are at odds with the science and with what has occurred in association with past warming.

Although the data presented in these two chapters are far too voluminous to recount, it is important to note a very important aspect of the IPCC predictions that the fear mongers conveniently ignore: the IPCC’s assumptions about economic growth. Predictions of future effects of warming on humans have to be viewed in light of future wealth creation. To ignore this aspect of future development is negligent. As Goklany observes, warming in the various IPCC storylines is directly related to economic growth. That is, the scenarios that predict the greatest amount of warming also predict the greatest rates of wealth creation, especially for developing countries. Goklany points out that according to the IPCC’s own assumptions, “Under the warmest scenario, the scenario that prompts much of the apocalyptic warnings about global warming, net GDP [gross domestic product ] per capita of inhabitants of developing countries in 2100 will be double that of the United States in 2006” (p. 173, emphasis added). He goes on to point out that because of this relation, even with no new technologies, “developing countries’ adaptive capacity (to global warming) should, on average far exceed that of the United States today” (p. 174).

The doomsayers ignore this relationship. They assume that developing countries will have no more adaptive capacity to deal with climate change in the future than they have today. Indeed, even if the global-warming alarmists’ proposed policies are followed, the impact on the climate will still be close to zero (see chapter 2), yet the world’s poorest people will be denied the wealth creation needed to lift them from poverty. Thus, alarmist policies are lose–lose. Their approach is not only wrongheaded, but profoundly immoral.

Two overarching points from this volume need to be highlighted. First is that the politics of global warming has overwhelmed the science. It has led to the corruption of all scientific inquiry, regardless of the discipline, related to issues associated with climate change, especially those that might affect the policy debate. Scientific conclusions are driven by acceptable policy conclusions, which in turn are driven by the interests of the governments with the greatest influence on the IPCC. This point is rooted in interest-group politics and public-choice theory.

The second point is that to the extent a climate-change problem exists at all, it is best dealt with through adaptation. And the main route to adaptation is economic growth, regardless of its expected consequences for CO2 concentrations and global warming. As acknowledged in the IPCC’s own scenarios, this economic growth will ultimately come to fruition if we do nothing in an attempt to mitigate future climate change. As Goklany notes, “[T]he lack of economic development will be a greater problem than global warming” (p. 180). And as implied by Michaels’s analysis in chapter 2, if we pursue the alarmists’ “solutions,” we will definitely stymie economic development and at the same time have no impact on climate change.