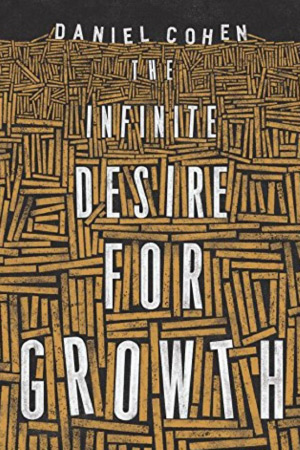 The Infinite Desire for Growth
Daniel Cohen
Kindle Hardcover Paperback Audiobook Audio CD
This book review is a web exclusive for the Fall 2018 issue of The Independent Review.

As Daniel Cohen (Director of the Economics Department at the École Normale Supérieure in Paris) sees it: “Economic growth is the religion of the modern world, the elixir that eases the pain of social conflicts, the promise of indefinite progress” (p. 1). But the Western world (especially Europe) is entering one of the most profound crises in history because growth is disappearing. Is there anything that can solve this crisis? Cohen’s answer is not very explicit, but seems to be “I hope so.”

The Infinite Desire for Growth begins with a broad recap of history. The human species is the only species to have domesticated itself. We spread out from Africa and occupied the globe because we could communicate with each other, accumulating and diffusing knowledge. We invented agriculture, money, trade, hierarchies, empires, and machines—and our population slowly rose. The West stagnated after the fall of Rome, but then woke up and embraced science and technology (partly because Christianity is the most anthropocentric religion, elevating the role of man). But then (Cohen draws on futurologist Ray Kurzweil) time continued to “accelerate.” “Every major stage of human history arrives ten times faster than the previous one. If we round off the numbers, hominids appeared ten million year ago, Homo erectus a million years ago, Homo sapiens sapiens a hundred thousand years ago, agriculture ten thousand years ago, the printing press a thousand years ago, electricity a hundred years ago, and the Internet ten years ago” (p. 66). Moore’s Law—according to which the power of microprocessors doubles every eighteen months—has superseded Malthus’s Law—according to which population growth drives the standard of living back toward subsistence.

Although he quotes the optimism of economist Paul Romer—“we consistently fail to grasp how many ideas remain to be discovered. ... Possibilities don’t add up. They multiply” (p. 71)—Cohen ultimately sides with pessimists (such as Robert Gordon’s The Rise and Fall of American Growth, Princeton: Princeton University Press, 2016), who say that we cannot expect much growth in the future. His pessimism only deepens when he considers climate change, warning that “according to scientists, an increase of 2 degrees Celsius vis-à-vis preindustrial levels is the limit that must not be surpassed. Beyond that threshold, disruptions of every sort are possible” (p. 101). Emissions of greenhouse gasses will have to be reduced by 60 percent to stave off this dystopia. There is a ray of hope, however, because culture is malleable and some have adopted a “postmaterialist spirituality”—although most still have not shaken their “obsessive preoccupation ... with measuring themselves against others” (p. 134).

Because of global warming, economic growth is on the verge of literally drowning and baking us, in Cohen’s view. It might already have done so, were it not for the “silent miracle” (p. 97) of declining human fertility rates. Despite this, we want more economic growth. We feel we need more of it. We have an Infinite Desire for Growth.

We’re caught in a conundrum. More growth turns the environment into a kiln. But slow growth, no growth, or negative growth may be even worse. Cohen reports the finding that the “major ‘progressive’ periods of American life have almost always been concomitant with strong growth. ... Conversely, economic crises sparked the rise of populist movements ... the (renewed) ascendancy of the Ku Klux Klan ... and the conservative revolution of Reagan” (p. 140). We’re no longer hungry for calories, but we’re still hungry for wealth and status—and our status comparisons are increasingly global. Economic growth, more than pure wealth, is the key to the functioning of our society: “growth gives everyone the hope, short-lived but always revived, of rising above one’s psychological and social conditions. It is the promise that soothes worries, not its fulfillment” (p. 136). “The moral and political crisis that Western societies now face owes much more to the vagaries of growth than we are generally prepared to admit” (p. 140).

Cohen concludes that we need a new framework to cut this Gordian knot. However, he doesn’t try very hard to construct one. Rather, he critiques American and French society and asks us to consider Denmark as a role model. In Denmark people trust each other and their institutions. We need to restore solidarities, rehumanize the world, and take the long, slow, enjoyable path on our journeys through life. In a few sketchy pages along these lines, that’s the gist of his advice.

Cohen epitomizes the well-meaning, pessimist left. I don’t share this pessimism with him for several reasons. First, his claim that we should note a “permanent increase in the quantity of ... pollution postindustrial society generates” (p. 146) is belied by the actual trends for virtually every pollutant in rich countries. Instead, economists point to the Environmental Kuznets Curve, showing that pollution levels decline once countries achieve a certain level of income per person (which varies from pollutant to pollutant). Some might scream that carbon dioxide is the exception to this rule, but U.S. greenhouse gas emission peaked over a decade ago (see U.S. Environmental Protection Agency, “Climate Change Indicators: U.S. Greenhouse Gas Emissions”), and it’s not clear that carbon dioxide is a pollutant. Scientists certainly don’t speak with the unanimity Cohen suggests about the catastrophic effects of surpassing a 2 degree Celsius rise in global temperatures. Projections of sea level rise from the Intergovernmental Panel on Climate Change are fairly modest (two or three feet by the end of the century), global temperatures are rising much slower than pessimists predicted (and the rise may have paused, according to satellite readings), humans have proven themselves to be increasing adept at adapting to climate change, there seem to be very inexpensive solutions we could adopt if the problem became serious (e.g. injecting sulfur dioxide into the stratosphere to increase earth’s albedo and cool things down), and we are likely to find affordable ways to sequester carbon dioxide in the not-too-distant future.

Second, Cohen’s correlation between “progressive” eras of history and periods of growth strikes me as nonsense. The periods of strong economic growth and “progressive” politics he identifies are 1865–1880, 1895–1919, and the post-World War II period; while the coincidence of slow growth and regressive politics are 1880–1895, the 1920s, and 1973-–1993 (he admits that the 1930s don’t fit his scheme and pats Franklin Roosevelt on the back for “imposing” the New Deal “in the midst of a resurgence of racism and anti-Semitism” [p. 141]). First, the rate of increase of real GDP per capita was virtually the same between 1865–1880 and 1880–1895—and it’s noticeably higher in the latter period if it ends a bit earlier, rather than in the middle of a recession. Second, the slowest growth in any of these periods came from 1895 to 1919, while the most rapid was during the 1920s (hasn’t Cohen heard of the “roaring” twenties?) and his identification of this period as the era of the resurgent KKK is odd, since this was overshadowed by quite a few larger cultural phenomena. Finally, growth in per capita real GDP was virtually equal between 1945–1973 and 1973–1993, although it is noticeably higher if the years 1946–1973 are used. (All these figures are from Louis Johnston and Samuel H. Williamson, “What Was the U.S. GDP Then?” MeasuringWorth, 2018) In addition, many of the “progressive” policies he seems to be extoling have had lingering effects that hamper growth and erode individual responsibility (although some of them, especially the expansion of civil rights to minority groups, are clearly worth celebrating).

Despite these criticisms, there are some important kernels of truth in Cohen’s arguments. Most Americans, the French, and almost everyone else in the world (probably even the Danes) seem to have a virtually insatiable desire for economic growth. And truly infinite desires for material things are certainly bad. Not because they will wreck the planet—environmental quality appears to be a normal good, so we “purchase” environmental improvements as we get richer. Not because we won’t be able to attain strong economic growth for generations to come—incentivizing billions of people to come up with productive ideas will probably achieve this too. Rather, infinite desire for any and all material things is simply bad for us. We seem to have passed the “too much” threshold in a number of areas, such as too many calories and too much time spent on our electronic devices. Cohen might be right that we need a new framework—but it must be a framework to deal with abundance, a mental framework, which I doubt will come from listening to pessimists.