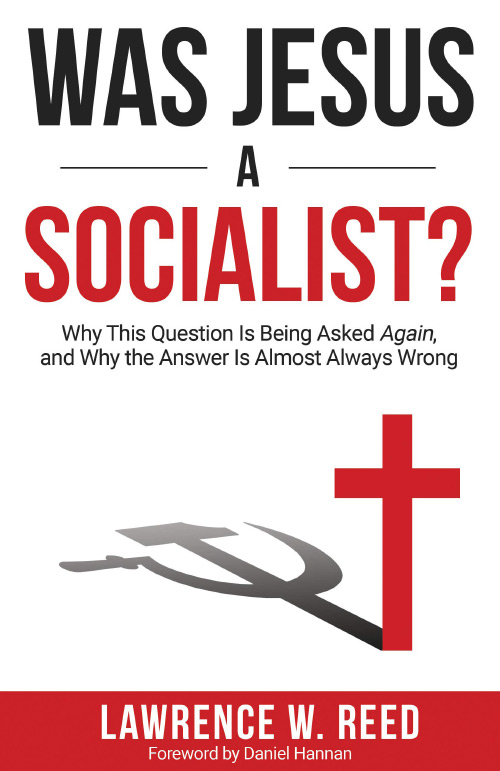 Was Jesus a Socialist?
Why This Question Is Being Asked Again, and Why the Answer Is Almost Always Wrong
Lawrence W. Reed
Kindle Paperback
This book review is a web exclusive for the Spring 2021 issue of The Independent Review.

Was Jesus a socialist? Lawrence Reed’s firm answer is: No.

He aims to show that “nothing in the New Testament even hints that Jesus would support what today’s socialists call for,” especially “magnifying the powers of earthly government to redistribute wealth,” centrally plan the economy or control the means of production (p. 8). Reed (president emeritus of the Foundation for Economic Education) reaches this conclusion by rejecting a misguided modern notion that socialism is simply about being unselfish and helping the less fortunate. Socialism is about power and coercion. Capitalism has the successful track record of alleviating and even eliminating the curse of absolute poverty, not socialism. “Every socialist experiment ends in dictatorship and labor camps” (Daniel Hannan, in the foreword, pp. viii-ix). But, notes Reed, Jesus cannot be enlisted as a supporter of capitalism, because both socialism and capitalism “are modern-day terms, and to apply any of them to Jesus is to limit him to but a fraction” of who he was and what he taught (p. 8).

The greatest strength of Was Jesus a Socialist? comes in simply examining Jesus’s own words and teachings.

For example, in the parable of the Good Samaritan, a compassionate man (the Good Samaritan) comes to the aid of a man who has been robbed, beaten and left half-dead on the side of the road, while a priest and a Levite do not stop to help. “Who is the hero of the story?” asks Reed. “Certainly not the two bureaucrats [the priest and the Levite]. Of course, it’s the Samaritan, who helped the man himself, on the spot, with his own resources and of his own free will” (p. 26). “Jesus frequently urged people to help one another, but he never—repeat: never—suggested that this be done through third-party coercion. It was to be personal and voluntary, always . . . . Jesus was not interested in the public professions of charitableness in which the legalistic and hypocritical Pharisees were fond of engaging. He dismissed their self-serving, cheap talk . . . . Suppose Jesus appeared to you today and you said to him, ‘As proof of the charity in my heart, I assure you that I vote for politicians who take from rich Peter to pay poor Paul.’ I don’t think he would be impressed” (p. 27, emphasis in the original). Oddly, Reed doesn’t mention that the Good Samaritan turned to the market to help the robbers’ victim. The innkeeper plays a critical role in the story, as the Good Samaritan—after cleaning and bandaging the man’s wounds—realizes that he can serve the man better by paying someone to finish the job and nurse him back to health. Jesus instructs us to love our fellow man and be generous with what God has given us, but our generosity can multiply if we cooperate with others, often by harnessing the power of markets.

In the parable of the workers in the vineyard, the owner of the vineyard pays all his workers the standard daily wage—those who labored all day and those who worked only the last hour. When those who labored all day grumble, the landlord replies to one of them “My friend, I am not cheating you. Did you not agree with me for the usual daily wage? Take what is yours and go. What if I wish to give this last one the same as you? Am I not free to do as I wish with my own money? Are you envious because I am generous?” (New American Bible Revised Edition, Matthew 20: 13-15). Reed tellingly asks: If Jesus were a socialist, how would this parable have ended? “Perhaps he would have chastised the landowner for unfairness. Maybe the government would have required the landowner to raise the wages of the first group of workers. Or if Jesus’s alleged socialism were of the doctrinaire Marxist variety, the landowner’s property might have been nationalized and turned into a state-run commune” (p. 22). Instead, Jesus gives “an unequivocal assertion of the rights of private property and contract” (p. 21). “None of this reads like a tract on socialism. Everything is voluntary and market based . . . . If he was a socialist, or at least ambivalent on the matter, surely another of his parables would offer an opposing setting, perspective, or lesson. Is such a parable to be found? No” (p. 22) concludes Reed. One might add, that the core of the parable—both in its earthly and heavenly dimensions—is Jesus’s gentle explanation that it is wrong to be envious of others’ good fortune or generosity, especially the generosity of God. However, rather than rejecting envy, socialism foments it and wallows in it. Winston Churchill called socialism “the gospel of envy.” The “vast majority of what’s good in the world comes not from the state but from private, voluntary, peaceful, and mutually beneficial interactions that people engage in every single day. Some see this and are amazed and grateful. Others see it and are jaded and unappreciative” (p. 52).

The state can compel redistribution, but could it ever compel generosity? St. Paul directs us to give “without sadness or compulsion, for God loves a cheerful giver” (2 Corinthians 9:17, emphasis added), but Reed warns that socialists are liable to twist Jesus’s teaching that we must “repay to Caesar what belongs to Caesar and to God what belongs to God” (Matthew 22:21), granting the state a blank check to expand limitlessly. “Sorry, socialists,” says Reed, “but Jesus said nothing like, ‘It belongs to Caesar if Caesar simply says it does, no matter how much he wants, how he gets it, or how he chooses to spend it’” (p. 59). The Eighth Commandment says “You shall not steal,” not as the socialist suggests “You shall not steal unless you’re absolutely positive you can spend it better than the guy who earned it” or “You shall not steal, but it’s OK to hire someone else, like a politician, to do it for you” (pp. 60-61).

Another telling case that Reed discusses is Jesus’s response when “Someone in the crowd said to him, ‘Teacher, tell my brother to share the inheritance with me.’ He replied to him, ‘Friend, who appointed me as your judge and arbitrator?’ Then he said to the crowd, ‘Take care to guard against all greed, for though one may be rich, one’s life does not consist of possessions’” (Luke 12: 13-15). When asked to weigh in on a question of redistribution, Jesus warned against greed. We should heed this warning whenever redistribution is in question, especially when it will be coming our way.

Finally, Jesus warned that it is hard for the rich to enter heaven. Reed could have considered this problem at greater length. Modern prosperity is a double-edged sword, not an unmitigated good. We must be especially wary because—by the standards of world history including the time in which Jesus walked the earth—we are all incredibly rich. And our wealth is built on the technology and institutions—including the liberating teachings of Jesus—that existed long before we came along. It is built on our human ingenuity, natural resources and all the other blessings we’ve received. Like the Rich Young Man, we need to use this wealth generously without coercion rather than becoming slaves to it or thinking that we have the right to take it from others. That’s our job. Asking the state to do this job for us isn’t taking our own responsibility seriously.