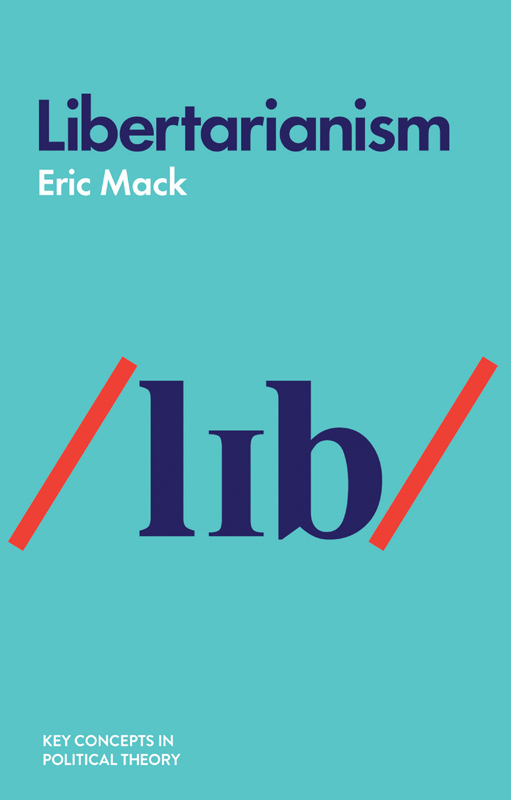 After a concise and informative introductory chapter, the book starts in earnest in chapter 2, where Mack covers libertarianism’s philosophical antecedents. Mack argues there are three distinct proto-libertarian camps. In the first camp are theorists such as John Locke, who grounds property rights and constraints on government authority by appeal to natural rights. The second camp is led by David Hume and Adam Smith, who focus on the conditions necessary to achieve cooperation and mutual advantage. According to Hume, for instance, cooperation demands stable property rights and contracts. Third are those who justify libertarian institutions through appeal to utility or consequences; less government and more freedom, so the argument goes, will tend to produce better outcomes. In this camp are John Stuart Mill as well as Herbert Spencer.

The intellectual history Mack provides in chapter 2 is both deep and fascinating. Even those who have been steeped in libertarian political philosophy for some time will find something new (I learned a tremendous amount about Spencer in particular). One possible criticism here is that the camps Mack proposes are not always as clear-cut as he suggests. Locke, for instance, was of course a natural-rights theorist, but it is not hard to find consequentialist arguments in Locke as well.

For example, when discussing the institution of property, he notes “that he who appropriates land to himself by his labour, does not lessen, but increase the common stock of mankind” (Second Treatise of Government [Indianapolis, Ind.: Hackett, 1980], pp. 23–24). Remarks like these cast Locke in a consequentialist light, suggesting that there is much fluidity between the camps.

Chapter 3 moves on to contemporary approaches to libertarian political philosophy. It focuses on two thinkers in particular, Robert Nozick and F. A. Hayek. Mack’s explication of both thinkers’ political philosophy is rich and incredibly detailed. Chapter 4 then discusses Nozick’s and Hayek’s takes on economic justice (sometimes called “social justice”). This, I think, is the best chapter of the book. In no other place have I seen so clear a description of Nozick’s Wilt Chamberlain argument and what it shows, a point often misunderstood in the secondary literature surrounding Nozick. Mack also takes seriously Hayek’s criticisms of social justice, which philosophers often dismiss as not serious or worthy of attention. Indeed, I believe chapter 4 is the most detailed engagement with Hayek’s work on social justice that I have ever come across.

Chapter 5 examines both intralibertarian disputes as well as external criticisms of libertarianism. I did find it odd that both topics are included in the same chapter; I think each could have received a chapter of its own. Regarding intralibertarian disputes, Mack distinguishes among anarchy, the “no taxation minimal state,” and the “taxation minimal state,” highlighting the points of disagreement among these three different flavors of libertarianism. In terms of external criticisms, Mack covers the critiques of libertarianism by John Rawls, Liam Murphy and Thomas Nagel, and G. A. Cohen. Mack’s analyses of these criticisms are insightful and fair.

An online bonus chapter covers more philosophical roads to libertarianism besides the ones paved by Nozick and Hayek on which Mack focuses so much attention. I did wonder why this chapter was made an online appendix as I think it is among the best chapters of the book. In this chapter, Mack looks at Hillel Steiner’s left libertarianism, Loren Lomasky’s norms for personal projects, Douglas Rasmussen’s and Douglas Den Uyl’s metanorms for human flourishing, as well as David Schmidtz’s work.

I thought some other views should have been included in the bonus chapter. For instance, one compelling argument for libertarianism is that the political philosophy of John Rawls—who is a champion of those on the political left—actually justifies libertarianism when properly understood. John Tomasi argues in his book Free Market Fairness (Princeton, N.J.: Princeton University Press, 2012) that economic liberties should be among the basic liberties protected by Rawls’s first principle of justice. There are other arguments showing the compatibility between Rawlsian political philosophy and libertarianism—for instance, in Loren Lomasky’s article “Libertarianism at Twin Harvard” (Social Philosophy and Policy 22 [2005]: 179–99) and in Daniel Shapiro’s article “Why Rawlsian Liberals Should Support Free Market Capitalism” (Journal of Political Philosophy 3 [1995]: 58–85).

Another route to libertarianism that perhaps should have received some attention is public-reason liberalism. Public-reason liberalism is a normative theory that says that coercive rules and institutions must be justified to those who are subject to them. The view is an offshoot of social contract theory. Some have argued that if we take seriously the diversity present in human societies, public-reason theories will tilt toward the minimal state. This is the thesis argued for by Gerald Gaus in his great paper “Coercion, Ownership, and the Redistributive State: Justificatory Liberalism’s Classical Tilt” (Social Philosophy and Policy 27 [2010]: 233–75).

My criticisms of Mack’s book, however, are very minor. In fact, what they amount to is asking Mack for more and, really, are a testament to how clear and sharp his analysis is. I want to hear what he says about Rawlsian and public-reason justifications of libertarianism because I am confident I would learn something new.

In sum, Eric Mack’s Libertarianism is a wonderful book. There exists no better book introducing the unfamiliar to what libertarianism is and what the best arguments in its defense are. It is not just for the uninitiated, however. Seasoned libertarians have much to learn from Mack’s work because its scope is incredibly wide and its detail incredibly intricate for a book that merely seeks to introduce libertarianism to the reader. It accomplishes far more than that.