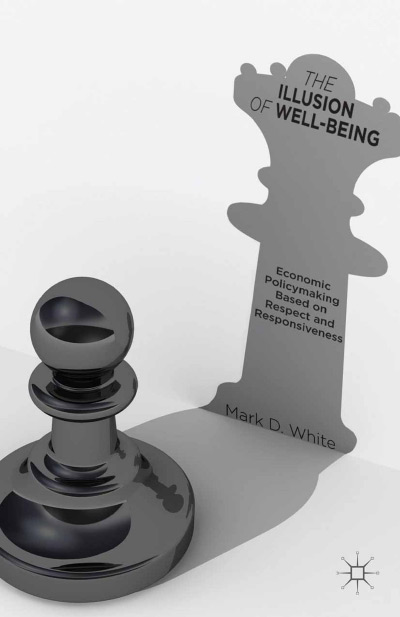 The Illusion of Well-Being
Economic Policymaking Based on Respect and Responsiveness
By Mark D. White
Kindle Hardcover Paperback
This book review appeared in the Spring 2016 issue of The Independent Review.

The central arguments in Mark White’s book will be familiar and attractive to those inspired by the work of Friedrich Hayek and James Buchanan. White argues that policy makers are too keen to appeal to metrics of happiness or well-being to justify their policy recommendations. White holds that policy makers pretend that they are in the business of improving the well-being of everyone and that they appeal to poorly designed empirical studies to support their policy recommendations. He argues that much of the current empirical research on happiness and well-being has yielded results that are arbitrary, inaccurate, and oversimplified and, thus policy recommendations that rely on empirical studies of happiness and well-being are not sound. He contends that the true interests of individuals should be the policy makers’ concern, but those interests are too complex and subjective to be accurately described with the results of surveys by positive psychologists and the quantitative methods used by behavioral economics. According to White, policy makers and happiness researchers are guilty of value substitution: they paternalistically impose their own values onto the values of the people whose well-being they purport to be investigating. He advocates an approach to policy making that focuses on enhancing the choices available to individuals in a society and responding to the concerns that people actually express via democratic processes.

The Illusion of Well-Being consists of four chapters. The first two chapters present White’s arguments that the current research in psychology and economics on happiness and well-being does not track the true interests of the individuals whose interests are being studied. The third chapter presents his argument that those researchers are guilty of value substitution and that many theorists who advocate the ethics of care also embrace an approach to caring that is overly paternalistic. The fourth chapter presents White’s own proposal for how policy making ought to be conducted: policy makers should make rules and laws that are based on respect and responsiveness. He maintains that policy makers should focus on constitutional economics instead of on welfare economics. That is, he contends, they ought to focus on creating rules that maximize the degree and extent of mutually consistent choices instead of trying to directly produce outcomes that increase aggregate happiness.

In the chapters that attack policy making based on concerns of happiness and well-being, White discusses how the historical development of utilitarian moral philosophy worked in tandem with the development of welfare economics. He also claims that the current psychological research on happiness is fundamentally misguided because it is based on a vague and indeterminate concept: “The nature of happiness itself is too vague and multifaceted to be defined with any precision—at least without missing much of the complexity that captures what makes it so valuable to people—or measured to even a minimal degree of accuracy and meaningfulness” (p. 43). Likewise with the concept of well-being: White argues that economic models of rationality that focus on preference satisfaction are also misguided because “sincerely held preferences and desires...don’t seem to contribute to what we would normally think of as personal well-being” (p. 74). He also contends that the concept of an individual’s preferences that is used in rational-choice theory is ethically impoverished because the economist’s concept of a preference cannot explain the way in which moral judgment motivates us to act. “There is no obvious way to incorporate principles and ideals alongside preferences in economic models of choice, although there have been a number of suggestions made in recent years” (p. 102), He argues that the “balancing of our preferences along with the principles and ideals we hold dear comes down to judgment, which, unlike standard economic models of decision making, is essentially qualitative and impossible to specify or model” (p. 104, emphasis in original). White’s Kantian moral psychology is worthy of serious consideration, but I take it to be an important and challenging research project to specify the exact nature and relation of choice, preferences, values, character, principles, and ideals. White does discuss the topic in other work (see Mark D. White, Kantian Ethics and Economics: Autonomy, Dignity, and Character [Stanford, Calif.: Stanford University Press, 2011]), but I take the issue to remain an open and pressing area of inquiry at the intersection of moral psychology and economics. (For a suggestion of how rational-choice theory may account for the role of moral judgments in political agents, see Geoffrey Brennan and Daniel D. Moseley, “Economics and Ethics,” in The International Encyclopedia of Ethics, edited by Hugh LaFollette [Oxford: Blackwell, 2013], 1552–61.)

Three weaknesses in White’s arguments deserve attention. First, from the outset of the book, his arguments are intended to show that policy makers should not rely on economic or psychological measures of happiness or well-being in forming policies. However, White does not distinguish importantly different kinds of policy makers: policy makers in the federal government, in state governments, in lower levels of government (counties and towns), in universities, in hospitals, in religious organizations, and in various levels of business. Given the widespread use of customer-satisfaction surveys in many of these organizations, which are often helpful tools in many contexts for measuring efficiency, it would be foolish for administrators in many sectors to consider those data to be an arbitrary or irrelevant measure of happiness. It is not wise to allow these data to be decisive in making policy, but they are not an arbitrary and irrelevant measure of happiness. Data about various forms of injury and infectious disease may also provide helpful information about unhappiness that policy makers should consider. White’s characterization of the role of empirical evidence in policy making overgeneralizes from his central case of the way federal policy makers often place too much emphasis on gross domestic product as a measure of economic health (and a measure of the happiness of the various countries’ inhabitants).

Second, White does not persuasively make the case that surveys that examine self-reports of happiness are guilty of value substitution. He correctly emphasizes that researchers need to be careful to avoid bias in framing their questions to study participants. However, he does not take seriously the fact that well-crafted surveys, which control for many of the forms of bias that he discusses, can reasonably use self-reported happiness as a proxy for expressions of subjective well-being. There is the danger that “framing effects” will influence these reports, and there is the danger of cognitive biases on the part of the researchers and study participants. However, a well-crafted survey can be implemented in a manner that avoids many of White’s concerns. Just as a poorly designed philosophy exam will not do a good job of testing students’ philosophical skills and probably express the values of the professor who constructed the exam, a poorly designed customer-satisfaction survey will not do a good job of tracking what people want and will probably express the values of the researcher who constructed the survey. However, the biases may not be due to the researcher’s values (the researcher may just be careless or not adequately trained in how to conduct a study), and that flaw would not be due to value substitution.

Third, the utilitarian can construe White’s own proposal to encourage respect and responsiveness in policy making as a means for producing the best outcomes. Borrowing Robert Nozick’s distinction between historical and end-result theories of justice, White claims to be advancing a historical approach that focuses on the historical processes that have created the institutions to be evaluated as just or unjust (pp. 136–42). However, when characterizing his own conception of policy making based on respect and responsiveness, he argues that policy making should maximize the degree and extent of autonomous choice (p. 148). Given White’s own assumptions and commitments in the argument, there are two problems with this proposal. First, it is an end-result approach instead of a historical approach: it is a consequentialist theory that takes the good to be autonomous choice. So White’s own theory may be construed as a version of consequentialism that takes the capacity to make autonomous choices to be the good that is central to well-being. Second, White’s own proposal is an end-result approach that requires policy makers to create rules that bring about his own comprehensive conception of the good; that is, White’s own prescription of how policy making should be done involves a value substitution that imposes his own values on policy makers who may not endorse his commitment to liberal neutrality.

The book has the casual tone of an undergraduate class lecture, and in the manner of a class lecture the discussion jumps from a careful and scholarly assessment of the academic literature to jokes and wisecracks. Student readers may find the shift in tone to be refreshing, a pleasant respite from the dreary arguments, but researchers may quickly become impatient with the pedantic tone and trite digressions. It is impressive, though, how in his central line of inquiry White manages to touch on a wide range of topics that are of central importance to the ethics of economics, economics in ethics, and ethics out of economics. The book would be well suited as a textbook to supplement the classic literature for an undergraduate course on philosophy, politics, and economics.