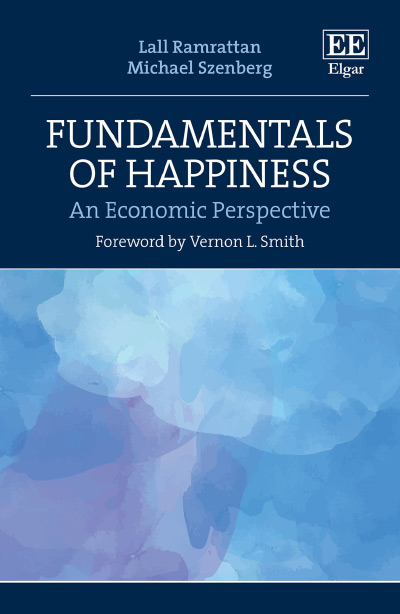 Fundamentals of Happiness
An Economic Perspective
By Lall Ramrattan and Michael Szenberg
Hardcover
This book review is a web exclusive for the Summer 2022 issue of The Independent Review.

Lall Ramrattan and Michael Szenberg’s Fundamentals of Happiness: An Economic Perspective is a masterful, comprehensive work on the economics of happiness. The book takes a tour through the history of economic thought to detail economists’ and philosophers’ long and complicated past of studying happiness. Scholars have long grappled with questions concerning this topic, and Ramrattan and Szenberg synthesize this history in a concise and complete manner, with each chapter acting as a positive and comprehensive dive into the history of economic thought surrounding economics and happiness. The authors take no opinionated stance on the issues raised in the text, but rather, provide a rich and detailed account of the subject. The book would certainly be of interest to any interested in the history of economic thought, particularly as it pertains to happiness, utility theory, and social welfare economics.

Ramrattan and Szenberg begin with a general overview of how economists have conceived of happiness throughout history. They discuss, for instance, how Mises understood human action as the striving for happiness (p. 1) and how Galbraith understood happiness to be necessary for The Good Society, which consists of “personal liberty, basic well-being, racial and ethnic equality, and opportunity for a rewarding life” (pp. 1-2). The authors then discuss how economists have attempted to measure happiness over the years. Income, GDP, and utility theory have been the largest focuses in the literature, and the authors give an overview of the many income hypotheses developed, from Friedman’s Permanent Income Hypothesis to Modigliani’s Lifecycle Hypothesis. The authors also delve into a discussion of utility theory, including topics ranging from Bentham’s utilitarianism, Von Neumann and Morgenstern’s model of risk, to Ramsey’s expected utility maximization. Additionally, the authors address the importance of the divide between employing subjective and objective measures of utility.

The second chapter takes a historical tour of ancient, medieval, and modern ideas of happiness and well-being. Ramrattan and Szenberg discuss thinkers from the Sophists, the Cyrenaics, the Cynics, and the Epicureans to the Stoics. They take a deep dive into the economic interpretations of happiness found in Plato and Aristotle, and quite interestingly argue that Aristotle’s understanding of happiness can be likened to a production possibilities curve (p. 29), as a man who is truly happy has all components he needs to realize his full potential. The authors also focus on the Middle and Modern ages, probing the history of thought as it pertains to economics and happiness from thinkers such as Hume, Bentham, Mill, Leibniz, Salerno, Kant, Schopenhauer, Kierkegaard, Nietzsche, Wittgenstein, Augustine, and Aquinas. One begins to see how entirely comprehensive the book is, just by the sheer range of thinkers with whom the authors engage.

The third chapter discusses how historical schools of economic thought deal with economics and happiness, and the authors particularly examine the “psychological, individual, social, and institutional views of happiness” (p. 73). There is, of course, a large divide between scholars who examine individual happiness, and those who examine social happiness. To understand this debate, one must understand cardinal and ordinal scales of happiness and utility; the authors explore this by drawing upon the marginal revolution initiated by Jevons, Menger, and Walras. They also explore the views on happiness, utility, monetary theory, and inequality proffered by the Mercantilists, the Physiocrats, Smith, Ricardo, Malthus, Marx, Keynes, Ramsay, and Robinson, among others.

The fourth chapter delves into the important debate around money and happiness, which as the authors show, tends to center around utility theory. Not only do the authors give a rich literature review on this question, but they also explore the methods that have been employed to tease out happiness from data. They explore surveys that have been tried, including Gallup polls; data that economists have collected, including Nobel laureate Angus Deaton’s work; and model-building, including Bernoulli’s model and Samuelson’s revealed preference theory. In addition, the authors do this literature justice by also discussing “the modern theories that challenge...the utility foundation of happiness” (p. 139). For instance, the authors examine prospect theory and the challenges it poses to utility theory and the general happiness literature. They also delve into many of the biases behavioral economists discuss, again offering evidence that the happiness literature has more than neoclassical theory to consider. The authors also go on to review Easterlin’s happiness paradoxes and Deaton’s puzzles in happiness studies.

As is apparent, Ramrattan and Szenberg’s text is a masterful and in-depth examination of the history of economic thought as it pertains to the economics of happiness. The book is situated within a rich literature and follows in the likes of Carol Graham’s “The Economics of Happiness” (2005, World Economics 6 [July-September]: 41-55), which artfully details how the economics of happiness includes more than the typical aggregate measures, but also includes the individual-level events, such as falling in and out of poverty. Similar yet distinct from the text is Luigino Bruni and Pier Luigi Porta’s edited volume, Economics and Happiness: Framing the Analysis (2005, New York: Oxford University Press), which compiles articles from some of the field’s giants (like Easterlin and Nussbaum) on the general topic of economics and happiness. Ramrattan and Szenberg’s book, though, is distinct from any others in this tradition, in that it provides a history of economic thought of the economics of happiness and synthesizes scholars and issues from the last 2500 years into a compact and rich text. It does this while simultaneously engaging with some of the bigger theoretical hot spots in the literature, including debates around money and happiness and social welfare theories.

While the text demonstrates great breadth and depth, there are several aspects that are lacking. For instance, one area not broached directly is market and non-market systems and their effects on happiness. While there is a discussion of GDP and happiness, there is not a discussion of whether market and non-market systems tend to affect happiness in different ways. This is a considerable and timely debate that is left largely unexplored in the text. Similarly, many texts on the economics of happiness engage with applications. For instance, Bruni and Porta’s Handbook on the Economics of Happiness (2007, Cheltenham, UK: Edward Elgar Publishing) includes case studies of Mexico and South Africa. Some sort of application or case study could have helped make the discussions more tangible for the reader. Bruno S. Frey’s Economics of Happiness (2018, Heidelberg: Springer) includes a chapter on types of policies that might affect happiness, such as family policies and livable cities. Ramrattan and Szenberg’s text could also include attempted policies, and while they need not take a stance, perhaps simply highlighting policies and their surrounding controversies could be a good addition.

One other issue that is endemic in the entire literature—not solely in Ramrattan and Szenberg’s text—is a definitional issue: happiness is not clearly defined. Some economists attempt to measure happiness through GDP per capita, others individual utility, and others social utility, but this doesn’t capture what happiness truly is. In the preface, the authors note that they are mainly concerned with “happiness on the material plane” and not ultimately “concerned with the divine” plane of happiness (p. x). It is extremely difficult to distinctly separate these two realms, though, since they are inherently entangled. That is, one’s spiritual or divine beliefs may inform their material life, and vice versa. For instance, Nittin Essoo and Sally Dibb (“Religious Influences on Shopping Behaviour: An Exploratory Study,” 2010, Journal of Marketing Management 20 [7-8]: 683-712) find that religious value systems significantly influence consumer shopping behavior. Or, consider that some forms of religion encourage members to live lives of poverty or donate heavily to charity. In a similar vein, extracting measures of happiness from surveys and experiments will ultimately miss many margins of what truly comprises happiness, meaning that understanding happiness holistically in any study will face unavoidable and insurmountable challenges. While this challenge is far beyond the scope of the text (and has yet to fully be sorted out over thousands of years), perhaps synthesizing this issue and the academic divisions it has caused could have been further explored in the text.

That said, Ramrattan and Szenberg’s text is masterful because it synthesizes thousands of years’ worth of economic thought on happiness into a comprehensive and concise text. It is the first book of its kind to do so while also engaging with some of today’s biggest debates on economics and happiness. The book is of great importance to anyone interested in tracing the historical roots of many modern-day topics, including social welfare theory, utility theory, and happiness. It is a book worth reading if only to understand how the discipline got to where it currently is, and where it might go next.