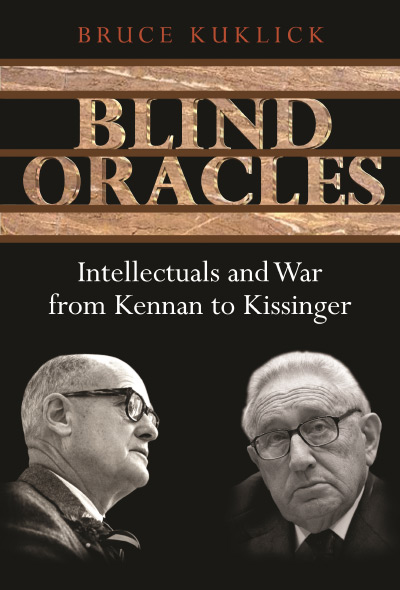 Blind Oracles
Intellectuals and War from Kennan to Kissinger
Bruce Kuklick
Hardcover Paperback
This book review appeared in the Winter 2006/07 issue of The Independent Review.

Blind Oracles is an informative and unsettling analysis of scholars’ role in influencing national-security policy from approximately 1945 to 1976 by a noted student of American intellectual history. The author’s analysis destroys many longstanding shibboleths about the importance of academic thought in the world of policymaking, and the book is unnerving in its revelations of such thinkers’ pretensions. Bruce Kuklick begins by sketching the history of U.S. infatuation with expert knowledge in the twentieth century and argues that in the field of national-security policy this orientation flourished after World War II. Among scholars, those at the RAND Corporation are perhaps the best known. Also in this tradition but differing in important respects have been the academicians housed at centers for national-security studies established in the late 1950s and early 1960s. Finally, Kuklick credits thinkers such as George Kennan, Hans Morgenthau, and Henry Kissinger as being influential though outside the positivist mainstream of RAND and the university centers.

In chapter 1, Kuklick describes how methods of scientific management contributed to the use of operations research during World War II and to the postwar rise of the RAND Corporation as an adjunct to the U.S. Air Force. Moving from purely mathematical analyses, RAND scholars soon began to use economic analysis and the techniques of rational-choice theory to argue for more military spending and in particular for greater support of the air force, their major financial benefactor. Kuklick then discusses Kennan’s position and his seminal 1947 article in Foreign Affairs, “The Sources of Soviet Conduct,” which became one of the bases for the doctrine of containment. In its global sweep and attention to political realities, Kennan’s approach differed fundamentally from that of the RAND analysts, and Kuklick portrays Kennan as articulating beliefs that already pervaded the policy culture and as being the “first intellectual middleman of postwar national security studies”(p. 40). The outbreak of the Korean War forced the RAND people to move from strategies for nuclear confrontation to ways of dealing with “conventional” wars. However, as Kuklick shows in chapter 2, RAND’s influence waned in the fifteen years from 1946 to 1961. Not only were major graduate schools instituting competing programs in security studies, but President Dwight Eisenhower made it clear that he had little use for the ideas that emanated from RAND.

Although Kuklick is not especially sympathetic to Eisenhower, he acknowledges that Ike’s strategy of massive retaliation constituted a clearly defined strategic policy and that he was intent on reducing the military and defense spending in general. Kuklick notes that as Eisenhower left office, he warned against the military-industrial complex and the dangers posed by a scientific-technological elite. Not unexpectedly, academic students of foreign policy deprecated Eisenhower’s approach to national security and, in their view, his lack of understanding of the value of rigorous analysis. During this period, however, Morgenthau emerged as a “realist” foreign-policy scholar who also saw little of value in the scientific approach to policy.

The scholars at RAND were enthusiastic about the change of administration in 1961, and their approaches to security policy were largely embraced by Robert McNamara, incoming secretary of defense, who features prominently throughout the rest of the book. McNamara, of course, epitomized the positivistic rational-choice approach to policy, and, as Kuklick shows, theories in this mold were plentiful, if transitory, in the new administration. Kuklick estimates that as the nation moved deeper into its entanglement in Vietnam, the theory or analysis of the moment appeared to have a shelf life of about a year. In chapter 3, Kuklick pauses to examine the Cuban missile crisis and the administration’s battle over sharing the Skybolt missile system with its British allies.

Although Richard Neustadt’s report on Skybolt illustrates the post hoc legitimizing role common to many of the academicians’ positions, interpretations of the Cuban confrontation now appear especially salient in this regard. Kuklick describes how scholars from Harvard and RAND scurried to place the policymaking during the Cuban crisis in a rational-analysis mold, although, in fact, as former secretary of state Dean Acheson put it, the outcome was the result of “plain dumb luck” (p. 126). Moreover, Kuklick argues that the really fundamental issue in the confrontation was the Soviets’ fear of a rearmed Germany, a point that most of the scholars of the time missed in their narrowly conceived recapitulations of the events. As Kuklick notes later, Graham T. Allison finally acknowledged the importance of the German question in the revised edition of his widely praised Essence of Decision (New York: Longman, 1999)—nearly thirty years after the first edition.

Kuklick believes that the rational-choice scholars continued to flit around the Kennedy administration, offering legitimizing theories for what was happening in Vietnam, but actually “shrouding” many policymakers from reality. He argues that among public officials of that time neither Dean Rusk nor McGeorge Bundy had much use for these analytic offerings and that they in turn duly came in for sustained criticism from the academic experts.

After the president’s assassination, the Kennedy family looked toward funding a major school of public policy at Harvard, and Neustadt, a favorite of the Kennedys and a policy advisor during the Kennedy administration, moved from Columbia University to administer the new program. Neustadt was a proponent of the value of using oral histories or interviews with those involved in major policy crises to construct a scholarly interpretation. Given his former association with the Kennedy administration and the power of Kennedy money in establishing the new school at Harvard, neither Neustadt nor his resident scholars were inclined to be critical of that presidency. Controversial ideas fell by the wayside. In Kuklick’s words, “Nowhere else was scholarship so clearly subservient to the outlook of a specific group of policy-makers” (p. 164). Thus, it is not surprising that those at the Kennedy School moved to the bureaucratic-politics thesis to assign blame when specific policies failed: the ideas propounded by policy technicians such as McNamara were not at fault; rather, bureaucratic in-fighting, administrative narrowness of vision, and delay were the cause of policy failures. Kuklick notes that this perspective proved increasingly useful to scholars as they saw their rationally constructed theories dismembered by events.

In the penultimate chapter, Kissinger enters the picture as a realist policymaker attempting to extricate U.S. policy from the quagmire into which it had settled. As Kuklick notes, Kissinger was not popular among his Harvard colleagues, primarily because he brought a broad historical perspective to questions of global strategy and U.S. self-interest. For him, history and politics were not reducible to formal calculations or narratives of the moment; they carried elements of both irony and tragedy. The idea that humans can through rigorous analysis control or even guide events was misleading, perhaps even dangerous. Kuklick contends that Richard Nixon’s views were basically compatible with Kissinger’s and that, whether or not one agrees with their goals, the two made a team that worked important changes in the world.

Chapter 11 deals with the period from 1976 to 2000, primarily in terms of McNamara’s failure to understand the shortcomings of his approach even long after the Vietnam debacle. Kuklick examines several of the conferences that McNamara convened with the North Vietnamese to try to uncover what went wrong. These conferences record McNamara as continually arguing that a failure of communication and the inability of the North Vietnamese to appreciate U.S. goals were what exacerbated the war. The North Vietnamese, in contrast, responded that they were fundamentally opposed to what the U.S. government was trying to do. In Kuklick’s view, when McNamara suggested that American policymakers erred in their calculations, he was still thinking in terms of cost-benefit formulas, not in terms of the fundamental moral issues that eventually came to motivate those on both sides of the conflict.

Blind Oracles is much more than a rehash of the tragic foibles of McNamara and of those who thought as he did. It is a searching and carefully nuanced examination of the relationships between policy decisions and the analysts and advisors who claimed to be able to understand and control events. Again and again, Kuklick notes these rational positivists’ arrogance and their denigration of the more politically oriented policymakers. It is, then, especially jarring to read of McNamara occasionally breaking into tears and crying at staff meetings as he sensed the unraveling of U.S. policy in Vietnam. A more fundamental cause of unease among many readers will be the realization that military action and the threat of such action spawned an entire coterie of experts and scholars whose livelihood and professional self-interest became inextricably intertwined with U.S. military power. It may be that war is too important to be left to the generals, but Kuklick shows that it is definitely too important to be left to the rationalist pretensions of academicians.