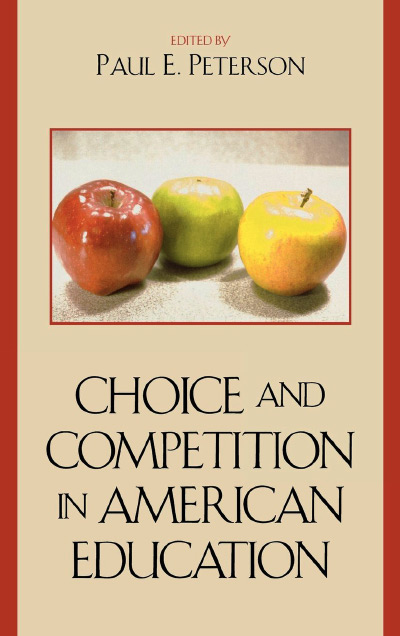 Choice and Competition in American Education
Edited by Paul Peterson
Hardcover Paperback
This book review appeared in the Fall 2006 issue of The Independent Review.

Paul Peterson’s Choice and Competition in American Education, a collection of twenty-three Education Next essays, provides a good overview of the limited choice and rivalry present in some U.S. K–12 school systems. Several chapters also discuss the woeful state of U.S. K–12 education and the barriers to reform, and several others describe efforts to tweak political accountability by contracting out some school services and by changing administrator training, teacher pay, and credentialing.

The first two chapters, as well as chapter 20, attempt to extract useful information from the experience with contracting out school inputs, including private management of public school campuses. Some of the contracting-out issues are interesting, but the implied relevance of competition to choice and competition in education is misleading. Such contracting yields no additional choice or competition in the delivery of K–12 instruction. Henry Levin’s chapter raises interesting questions about space shortages in elite private schools and about equity concerns. New schools apparently cannot easily deliver what many affluent parents seek in a private school—perhaps the reputation and status of admission to a school with a long, noble history—but that claim bears investigation.

On the basis of those persistent shortages, very limited evidence from contracting out services, the characteristics of existing private schools, and Chile’s voucher program, Levin rejects well-established economic theory regarding the likely effects of true competition. Because the alleged evidence is of dubious relevance, however, that rejection is at best premature. Chilean schools have little opportunity to compete; they all are regulated in such great detail that the voucher program amounts to little more than public-school choice. Even the effects of contracting out school management cannot tell us much about the effects of choice and competition. Privatizing management under contract just converts a government-run monopoly into a privately run but nevertheless government-owned and regulated monopoly.

The much-touted characteristics of existing U.S. private schools are the direct result of the near impossibility of making a profit while competing against “free” public schools.

Like Levin, Mary Diez argues that regulation is necessary to protect families and society from reckless private decision making, a belief that deserves much more scrutiny. Like many others, Diez implies that schools of choice will hire people (even criminals) who cannot teach and will offer shoddy curricula unless formally prevented from doing so. Accountability to footloose parents-consumers will apparently not prevent that outcome. Certainly, we need to understand better why that view seems to dominate political thinking virtually everywhere. Tightly regulated public and subsidized private schooling is the international norm. Is it so because the informality of market mechanisms lacks guarantees, or is market accountability widely mistrusted because it is poorly understood?

In their chapters, Frederick Hess and Alexander Russo lament the woeful state of school leadership. These chapters’ only connection to the book’s theme is their implicit condemnation of school systems that lack choice and competition. “New leaders for new schools” cannot find jobs because present arrangements do not reward “new” leadership. The vast majority of schools still value experience in coping with a compliance-driven rather than a performance-driven system, so naturally they produce compliance, not improved performance. The daunting challenge of delivering a comprehensive, everything-for-everyone bundle of services on virtually every campus, while complying with numerous mandates, yields a correspondingly low standard of success. Revised leadership training for people with different backgrounds does not change the fact that public-school district superintendents have the world’s most difficult job. They are supposed to satisfy a diverse clientele with a uniform product. Choice and competition would make that job unnecessary.

Authors of the four chapters on the teacher labor market say little about how choice and competition might influence the outcomes they lament. Michael Podgursky points out considerable movement between private-school jobs and generally higher-paying public-school teaching positions, which means that private schools are competitive despite paying lower salaries. The public-private salary differential reflects differences between the working conditions of average public and private schools. After acknowledging that most “salaries are set by governments in a non-competitive environment” (p. 93), Peter Temin makes the incredible claim that the government’s indifference to quality is a “market failure.” His solution, higher teacher pay, is already widely discredited. It would slow the exodus of obsolete and burned-out teachers, and it ignores the many structural issues that impede good teaching. Arguing for increased use of teacher merit pay, one author notes the potential for perverse incentives and counterproductive behavior, without noting that the zero-sum nature of public-sector merit pay and the difficulty of measuring merit without competition and market-determined prices are responsible for that problem. In contrast, private-sector merit is not a zero-sum game. In neither this chapter nor the chapter on salary compression does the author note how teacher and parental school choice and genuine competition would yield self-enforcing, self-financing merit pay. Top teachers would increase enrollments, thereby increasing private schools’ ability to raise salaries, which would have to be focused on the top teachers to keep other profit-seeking private schools from luring them away.

The most important part of Terry Moe’s chapter on teacher unions’ opposition to reform is the final half-page (p. 135), where he whets readers’ appetite for a discussion of how choice and competition might erode the unions’ ability to impede reform. In a chapter on how unions might lead rather than block reform, Charles Kirchner makes the common mistake of proposing what should be done without describing the change in incentives that will suddenly make it in the union leadership’s interest to take those actions. He does make the key point that union representation has deprofessionalized teaching, so that “[teachers] are industrial workers subject to micro-management” (p. 136).

Section 3 details the overwhelmingly positive but small effects of America’s restriction-laden and mostly narrowly targeted school-choice programs. For the most part, parents who move children to another existing school increase the child’s test scores and prompt some improvements in the schools they forsake. Missing from the book is a chapter that places these limited programs in the proper perspective of full market accountability and that recognizes the virtual irrelevance of targeted and restriction-laden programs to the “Nation at Risk” problem—which is an urgent call for transformation of the present system, not for limited movement within it. Like Levin in chapter 2, the authors of several of the school-choice chapters directly and indirectly make much ado about the uninformative, misleading differences between public schools and the private schools of the present system. Broadly expanded choice involving full-blown market accountability would produce a private-school sector that has little in common with the largely church-run, church-subsidized, nonprofit schools that dominate the current private sector.

William Howell’s chapter demonstrates that the federal No Child Left Behind (NCLB) law is a bright light that reveals the system’s inability to reform itself. It has engendered both hysterical reactions to modest pressure to achieve a low minimum standard—with much energy channeled into compliance, resistance, failure denial, and blame avoidance—and perverse reactions, such as increased focus on narrowing the curriculum, further neglect of bright students, and mind-numbing test-taking drills. Perhaps lacking the political capital to transform the system, the authors of NCLB must have recognized that feasible legislation would not change any of the key defects of the current system, so they settled on a law that would make the public much more aware of the present system’s defects and its inability to reform itself.

Peterson’s book provides information about a wide range of K–12 issues, including small doses of choice and competition, but it offers little basis to generalize broadly about the potential transformative effects of choice and competition, except indirectly by discussing many effects that result directly from the provision of schooling with very little competition. Sad to say, the worldwide scarcity of genuine competition in K–12 schooling precludes analysis of trustworthy direct empirical evidence. Discussions of the limited evidence must exploit theoretical models and indirect empirical evidence to explain what the limited evidence can be trusted to tell us reliably and where it can be devastatingly misleading. The addition of an introductory overview for each section of the book might have served this purpose; no anthology should be without such overviews. In this case, an overview of the school-choice chapters should have noted the importance of the information and incentive content of market-determined prices, opportunity to profit, and product differentiations that accompany choice and competition in most of the economy; it should also have noted that these attributes are extensively curbed or entirely absent in the K–12 systems that have adopted the modest programs discussed in this book. These matters require much more attention.