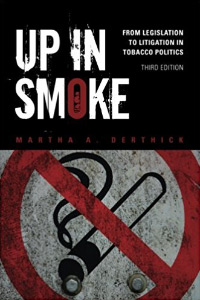 Up in Smoke
From Legislation to Litigation in Tobacco Politics
Martha A. Derthick
Kindle Paperback Mass Market Paperback
This book review appeared in the Winter 2002/03 issue of The Independent Review.

In Up in Smoke, Martha A. Derthick, former professor of government at the University of Virginia and author or coauthor of several studies of the U.S. policy process, describes and analyzes the events leading to the historic 1998 tobacco settlement with the states. She concludes that these developments constitute an unfortunate movement away from representative democratic negotiation toward a process of “adversarial legalism” that relegates democratic politics to the sidelines of public policy.

Derthick begins by describing patterns of cigarette use in the twentieth century and the growing concerns about the health effects of smoking. The defining moment in this chronology was, of course, the 1964 report of the Surgeon General’s Advisory Committee on Smoking and Health, which concluded that smoking is indeed hazardous to one’s health.

Following this report, what Derthick terms the “ordinary politics” of the U.S. policy process began to evolve. Congress moved in its usual halting fashion to educate the citizenry about the health dangers of cigarettes and to control their use. Over the years, it required various forms of warning labels on products, imposed bans on TV and radio advertising, and banned smoking on most domestic airline flights. During the same years, some state and local governments were enacting even more stringent regulations with regard to smoking. In the realm of “ordinary” tort litigation, the tobacco industry had more success. Individual suits against manufacturers made little headway. Plaintiffs against the industry encountered every possible procedural delay, and the costs to individuals in terms of time and money were enormous. Even when litigation reached the trial stage, juries were reluctant to absolve smokers of personal responsibility for their behavior. Nonetheless, Derthick argues, from 1964 to 1993 considerable progress was made in reducing the number of people who smoked.

Toward the end of this period, however, ordinary politics began to take a back seat to “adversarial legalism,” an approach greatly aided by forces within the federal bureaucracy. With the appointment of C. Everett Koop as surgeon general, President Ronald Reagan elevated a zealous opponent of smoking to a position of national authority, and by 1984 Koop was calling for a “smoke-free” society by the year 2000. In the early 1990s, David A. Kessler took office as commissioner of food and drugs and proved to be an even more tenacious bureaucratic in-fighter than Koop. Kessler’s most sustained effort rested on the argument that cigarettes contain the addictive drug nicotine and therefore should be regulated by the Food and Drug Administration (FDA). Derthick carefully details Kessler’s advocacy maneuvers and in a later chapter notes the U.S. Supreme Court’s decision in 2000 that the FDA had exceeded its authority in promulgating extensive regulations on the tobacco industry.

In the mid-1990s, the most ominous development for the cigarette companies was the increasing interest and cooperation among state attorneys general. The breakthrough for the states was the idea that they should be reimbursed for their Medicaid costs stemming from smoking. Attorney General Mike Moore of Mississippi first championed this claim. Choosing his judicial forum carefully and hiring a skilled tort lawyer, Moore procured a settlement from the major tobacco companies. From the perspective of the state attorneys general, the beauty of his approach was not only that it advanced a new basis for litigation, but also that, by utilizing tort attorneys on what was loosely a contingency-fee basis, it avoided any need to depend on legislative funding or approval.

At this point in the story, Derthick pauses to examine what she sees as the changed context of American politics that has allowed adversarial legalism to succeed. In particular, she notes the increase in cause advocacy, often underwritten by foundation funding and promoted by faculty activists from major law schools. She argues that the growth in government and what she terms the “nationalization” and “mediaization” of politics also have rendered the policy process more amenable to those promoting causes. This activist fervor has received further reinforcement from the emergence of a cadre of tort lawyers who have succeeded in obtaining huge awards from their industry prey. These factors and greater cooperation among the state attorneys general finally forced the cigarette industry to agree to the huge master settlement agreement (MSA) with the states in 1997.

However, the agreement required congressional approval, and it eventually foundered on this procedural reef. As a result, the forty-six state attorneys general who had not settled yet with the cigarette industry entered into an MSA that did not require congressional approval and that eventually was ratified by consent agreements in all of the state courts. This settlement is unprecedented in its scope and substance, although it is less severe on the industry than the proposed 1997 MSA. It commits the tobacco companies to paying more than $200 billion to the states over a period of twenty-five years, with additional payments, to be negotiated, in perpetuity. It protects the companies from further lawsuits by the states, although not by the national government or private individuals, and makes it exceedingly difficult for new firms to compete with the major firms for market share. In return, the industry has agreed not to challenge the constitutionality of the settlement and to abolish both the Tobacco Institute, its lobbying unit, and the Council for Tobacco Research. It also will refrain from lobbying against state legislation aimed at limiting young people’s access to cigarettes.

Derthick’s primary concern is that the tobacco settlement may be a harbinger of the general movement of “adversarial legalism” into the formulation of government policy. She views this development as a serious threat to normal policy formulation, which relies heavily on a legislative policy process that is presumed to reflect or represent the sentiments of the population at large. In contrast, the MSA was negotiated among the parties without any public input, and it has been characterized as a “sweetheart deal” for both sides. This mutual accommodation was achieved by circumventing the legislative process almost entirely. In Derthick’s view, “as public policymaking,” the settlement of 1998 was “deeply flawed. . . . Inevitably the settlement served the interests of those who framed it” (p. 220).

Pursuing this issue, Derthick offers further disquieting thoughts about the deleterious consequences of adversarial legalism. Not only does this approach push legislative policymaking to the margins, but it also has the potential to politicize the judicial branch thoroughly. In this particular instance, tort lawyers reaped billions of dollars in fees, and Derthick points out that they are now in a position to pour millions of these dollars into state judicial races to obtain judges who will be sympathetic to their efforts. In addition, state legislatures—Florida is a salient example—on several occasions have intervened directly in tobacco litigation by enacting legislation that makes it easier to obtain judgments against the industry.

For those readers sincerely interested in reducing smoking and its attendant health risks, Up in Smoke presents a decidedly mixed bag. Although smoking continues to decline among Americans, the states now have a large vested interest in seeing that the sale of cigarettes continues unabated. If such a continuation occurs, they can count on substantial payments from the industry for at least the next two decades. Also, many states are now increasing dramatically their excise taxes on cigarettes. The revenue stream from this unhealthy habit has become important to state finances. Obviously, the states will be reluctant to ban smoking entirely.

Thus, those aspiring to a smoke-free society are now considerably more limited in their alternatives for achieving their goal. Local governments may continue to enact highly restrictive legislation, and there is the slim possibility that national government litigation may result in heavier penalties on smoking. Lawsuits by private plaintiffs also remain a viable, though limited, option. The most serious problem posed by the MSA for antismoking activists, however, is that it has created a powerful political constituency that reaps substantial rewards from the tobacco industry. There is little reason to believe that state legislatures will stand idly by and allow either their courts or their local governments to threaten this revenue.

For the general public, the MSA raises the possibility that tort lawyers in combination with the states will seek other industry targets ripe for the plucking. As Derthick has argued so ably, such a development will constitute an exceptionally treacherous approach to policy formulation. Although MSAs with industry may appear to the public eye to be debilitating impositions on American enterprise, industry leaders ironically may find considerable advantages in them. Since entering into the 1998 MSA, the major tobacco companies have the certainty in perpetuity of protection from further state lawsuits and are able to impose substantial burdens on new companies threatening their market share. With a little imagination and at the right price, other corporate entrepreneurs may find MSAs even more rewarding.