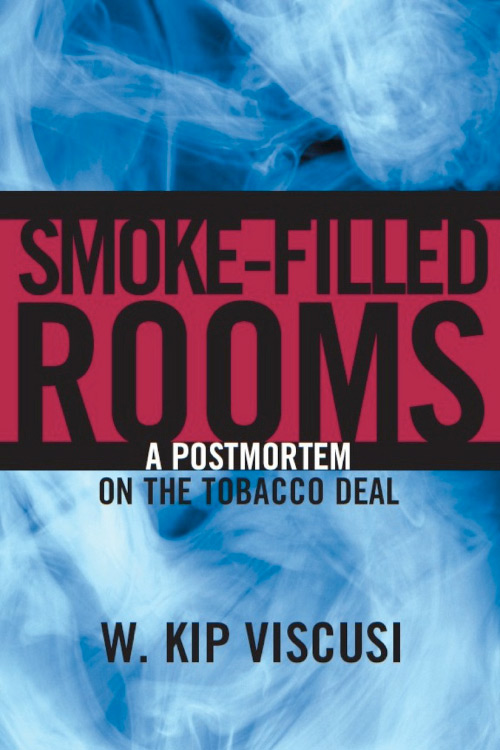 Smoke-Filled Rooms
A Postmortem on the Tobacco Deal
W. Kip Viscusi
Kindle Hardcover
This book review appeared in the Winter 2003/04 issue of The Independent Review.

Anybody who followed the literature on the “ social cost” of smoking over the past two decades must have been deeply puzzled about how state governments could justify their mid-1990s suits against the tobacco companies, why the latter rushed to settle out of court, and why they finally accepted the 1998 settlement, paying $243 billion for costs that smokers actually never imposed on the public treasury. In Smoke-Filled Rooms, W. Kip Viscusi brilliantly answers these questions and others.

In a few central chapters, Viscusi explains why there is no net cost of smoking to government. Smokers do have higher health care costs while they are alive, but their earlier deaths more than compensate in terms of reduced expenditures for social security and nursing care. The net cost is negative even without counting excise taxes. Adding those taxes, smokers contribute $0.88 net per pack of cigarettes to the public treasury.

The fact that statistically smokers die younger cannot be ignored if one wants to calculate a meaningful cost. In its litigation Memorandum, the state of Mississippi argued that this sort of calculation “is utterly repugnant to a civilized society” (qtd. p. 87). Viscusi reminds us that “it is the anti-smoking forces and the government lawsuits that initiated this framing” (p. 77). At any rate, even when one does not include these cost savings, tobacco excise taxes are sufficient to make smokers pay for their additional health care.

Viscusi, a Harvard professor and a highly respected expert in the economics of risk, believes the standard medical claim that smokers’ risks are “enormous” (p. 7). In contrast, Ralph Harris and Judith Hatton, as indicated in their little book Murder a Cigarette: The Smoking Debate (London: Duckworth, 1998), are among those who argue that the medical risks are “grossly exaggerated” (p. 123). Whatever the scientific truth, P. J. O’Rourke had a point when he said, “Everything that’s fun in life is dangerous. And everything that isn’t fun is dangerous too. It’s impossible to be alive and safe” (qtd. in Harris and Hatton, Murder a Cigarette, p. 16).

At any rate, one cannot maintain, as have the World Bank and the U.S. states in their litigation, that smokers are uninformed of what the public-health establishment thinks is their risk. As Viscusi’s work has shown, much evidence demonstrates that both smokers and nonsmokers greatly overestimate the risks of smoking. Viscusi calculates that “if people understood the lung cancer risk accurately as opposed to overestimating it, the societal smoking rate would increase by 6.5–7.5%” (p. 163).

In discussing the state suits and their settlement by tobacco companies, Viscusi provides a masterly and scholarly analysis of a host of related issues. For example, the secondhand-smoke scare was initiated by the Environmental Protection Agency’s doctoring of the statistics. Addiction? There are forty-four million former “addicted” smokers in the United States. “As measured by short-run price responsiveness,” adds Viscusi, “people are no more addicted to cigarettes than they are to lawyers or the opera” (p. 172).

Why then did state governments bring the suits in the first place? Because, as the bank robber Willy Sutton famously said, “that’s where the money is.” The scheduled payments run over twenty-five years, and some are to continue in perpetuity. Many governments and lawyers rushed to securitize their future streams of income by issuing tobacco litigation bonds. Like addicted children, they wanted their candies now!

Securitization was not a bad calculation, after all (less than 10 percent of the settlement money has been securitized). As Viscusi points out, settling out of court was a big mistake for the tobacco companies, who previously had enjoyed an unbroken string of litigation successes. Since the settlement, however, juries have started awarding judgments in the billions of dollars in favor of individual plaintiffs, and the federal Sutton—pardon me! the federal government—has joined the fray. As I write, Fitch Ratings has placed the tobacco bonds on its “watch negative” list (Wall Street Journal, on-line edition, July 15, 2003), the bonds’ risk premium has jumped (Wall Street Journal, on-line edition, July 17, 2003), and New York City, one of the cities that were part of the settlement, has just postponed a planned issue worth $715 million (Wall Street Journal, on-line edition, July 17, 2003). Will new litigation kill the goose that, at gunpoint, is laying the golden eggs?

Not unexpectedly, the litigating states lied through their collective teeth. Or perhaps I should say “ their social teeth,” as the word social “increasingly supplants the word ‘good’ as a designation of what is morally right” (Friedrich A. Hayek, The Fatal Conceit: The Errors of Socialism [Chicago: University of Chicago Press, 1988], p. 114). Obscene appeals to children’s welfare were made constantly to market a deal that had little, if anything, to do with children’s health. Like the whole antismoking jihad, the state suits actually had little to do with health, period. Viscusi explains that if public health were really the objective, promotion of low-tar cigarettes (20 percent safer in terms of the lung cancer risk) would not be illegal. Similarly, the state and its public-health puppets would not be up in arms against technological innovations such as the safer Eclipse or Accord cigarettes. The federal suit even claims that marketing low-tar and low-nicotine cigarettes violates the Racketeer Influenced and Corrupt Organizations Act.

Lies and deceit. The settlement was marketed as a damage payment by tobacco manufacturers but actually was structured as an excise tax to be borne almost entirely by smokers. More generally, Viscusi points out, “the welfare of smokers never arose as an explicit concern in any of these state lawsuits” (p. 215). More than 90 percent of the money collected has been allocated to projects unrelated to smoking, such as roads, bridges, parks, and jails. The mayor of Los Angeles even wanted to use most of the city’s $300 million settlement money for the legal defense of rogue cops. And the looters made sure that the $18 to $38 billion of lawyer fees (the exact amount is not known) would be counted separately and paid directly by the tobacco companies so that the ignorant citizens could not figure out that it indirectly came out of the state gains.

Many antitobacco lawyers have been made multimillionaires, and some law firms have received billions. One of the lawyers, Richard Scruggs, pocketed $900 million. Another, Daniel E. Becnel, has confided to Viscusi that he owns perhaps the world’s most extensive collection of Nazi memorabilia. Should we view his obtaining such a collection as only an irrelevant coincidence? (See Pierre Lemieux, “Heil Health,” The Independent Review 4 [fall 1999]: 303–6.)

Viscusi had forecasted that the ultimate impact of the tobacco settlement would “go well beyond the initial price tag, as it provides the financial backing for additional suits against cigarette companies and other products, altering the tort liability landscape” (p. 5). He was correct. Health management organizations, gun and lead paint manufacturers, as well as restaurant and food businesses already have been sued or threatened, often by former antitobacco lawyers hunting for their next source of loot.

If there were any justice, the state governments never would have won their suits, but “the industry gambled on an out-of-court settlement as the cure for its litigation ills, and it lost” (p. 99), a gamble that Viscusi calls “an enormous error in judgment” (p. 216).

Of course, as a brilliant economist, Viscusi knows the optimal level of smoking is not zero. “Moreover,” he writes, “even the antismoking critics have not claimed that the market failure is so great that a complete ban is necessary” (p. 194). On this score, he is wrong: World Bank economists, somewhat surreptitiously, do suggest that the “socially optimal level” of smoking is zero (see Pierre Lemieux, “World Bank’s Tobacco Economics,” Regulation 34 [fall 2001]: 16–19). And why is Viscusi, like almost everybody else, blind to the long-term consequences of coercive controls on smoking by youths—for example, ID requirements that move us closer to the total Surveillance State?

Viscusi might have explained better the distinction between the “social cost of smoking” (an expression he sometimes uses carelessly, for example, on pp. 62 and 67) and its financial cost (which he shows to be negative). He is not careful enough with expressions such as “costs of smoking to all of society” (p. 75), using them as if they had indisputable meaning in welfare economics. And what is “our national health” (p. 214)? In Viscusi’s defense, he is not the only or by any means the most sinful economist in these respects—not to mention the antismoking crusaders, who generally do not have the faintest idea of what cost and social mean.

Viscusi is not a radical libertarian, but rather a prudent neoclassical economist who does not like smoking. He argues that any government intervention over and above preventing smoking by youths and adequately conveying the risk of smoking to the adult population is “an intrusive form of paternalism” (p. 3). In my opinion, he is too naive about the state and its compagnons de route. He even proposes new missions for the Food and Drug Administration in gathering and disseminating information about comparative risks of different cigarette brands.

The author of Smoked-Filled Rooms goes out of his way to explain that although he has been deposed as a tobacco industry expert on smoking-risk issues, his research has been scholarly, independent, and peer reviewed. Given the ferocity of the health fascists in the jungle of statist predators, we can understand the Harvard professor’s precautions and wish him good luck. One longs for the day when subsidized academics and state-financed public-health bureaucrats and quasi-bureaucrats will feel compelled to apologize for their government ties and for robbing the taxpayer.

In the meantime, Kip Viscusi’s book will remain a monumental testament to the massive fraud that antismoking crusaders and their puppet states have perpetrated against the citizenry. Our children will read this book when they are older and wonder, if they are not by then too much addicted to and controlled by the state, how the villains could get away with all this chicanery. Of course, the real villains are neither the smokers nor their suppliers.