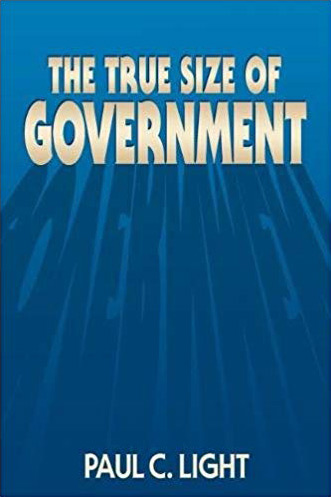 The True Size of Government
Paul C. Light
Hardcover Paperback
This book review appeared in the Winter 2000/01 issue of The Independent Review.

Measuring the size of government is inherently problematic. For example, the usual measures—government revenues or expenditures as a share of gross domestic product—offer some clues, but they leave begging many questions about government’s less-direct influence on resource allocation through regulations and mandates. Although the title of his book suggests a broader undertaking, Paul C. Light grapples with one measure of the size of government, the size of the labor force that produces goods and services for the federal government. Still, he does more than simply enumerate the federal workforce; he also deals with important policy issues related to managing that workforce.

Yet, the president’s claims have some merit. From 1984 to 1996, the total federal workforce declined by almost 1.7 million. However, closer examination reveals that the decline was largely the result of reducing the number of defense civil service, military, and defense contract workers, a decline that presumably would have occurred regardless of which party controlled Congress or sent an occupant to the White House.

Sorting through the numbers used to calculate the total federal workforce can be tedious, but the insights gained are valuable. Of particular importance, the size of the federal workforce, including the shadow, is far greater than the usually cited statistics reveal. For example, the true federal workforce accounts for about 60 percent of all government employees, compared to the 13 percent claimed by the Office of Management and Budget (OMB). Similarly, true federal employment accounts for sixty-four jobs per thousand, a figure nearly equal to that of the manufacturing sector, not the mere eleven per thousand indicated by the official statistics. Comparisons of government employment as a percent of total employment with other Organization for Economic Cooperation and Development (OECD) countries reveal the United States to be in the “middle of the international pack” (p. 40).

Although the official statistics may obfuscate the true size of the federal workforce, the political incentives to use a shadow workforce are clear. Simply put, the “illusion of smallness” is the natural outcome from a political system facing a citizenry with conflicting ideas about government. After all, Americans want both “government that looks smaller” and government that “delivers at least as much” (p. 48). Light surmises that “under great pressure to deliver the goods without bulking up, government has little choice but to create shadows” (p. 53). Nearly all parties in government benefit from the tactic. Presidents benefit from a shadow workforce that helps them maintain control over government. Members of Congress benefit through awarding contracts and pork-barrel projects to special interests and constituents who, in turn, contribute to their campaigns. Both political parties benefit in that Republicans can claim to be keeping the bureaucracy off the backs of business and Democrats can deflect charges of being the party of “big government.” Civil servants may benefit because bureaucrats who keep their jobs gain power, and even federal employee unions have accepted personnel reductions in exchange for greater influence over federal workforce policy.

After examining the true size of the federal workforce and the political incentives to use shadow workers in chapters 1–3, Light turns his attention in chapters 4–6 to policy-management issues. He provides a historical overview of efforts to reduce the federal workforce and of the methods for doing so: ceilings, freezes, and downsizings. But whatever the method used, the reduction has been “driven more by political exigency than by wisdom” (p. 130), and the result has been a large shadow workforce that government agencies have used to compensate for cuts in employment.

So what federal workforce policies would reflect “wisdom”? That is, what government functions should be carried out by federal employees? Conversely, what government functions should be relegated to the shadow workforce? The Office of Federal Procurement Policy has grappled with the second question, declaring that inherently governmental functions, defined as those ”‘so intimately related to the public interest as to mandate a performance by the Government employees’” (as qtd. in Light, p. 149), should be performed by federal employees. Examples include command of the military forces, determination of agency policy, and legal interpretations of regulations and statutes. Similarly, the OMB has studied the third question, concluding that commercial activities, defined as any “process resulting in a product or service that is or could be obtained from a private sector source” (as qtd. in Light, p. 146), should be contracted out. Examples include the provision of audiovisual and food services and the operation of motor pools. Despite the intuitive appeal of these definitions, Light argues that “departments and agencies [have] enormous discretion in defining commercial activities and inherently governmental functions pretty much as they see fit” (p. 153).

Given the lack of teeth in these definitions, Light moves on to consider the consequences of a shadow workforce. At times, the use of shadow workers can enhance government performance and efficiency, especially when contracting out gives agencies access to skill and flexibility they do not have in house. (For example, using contract workers with expertise in COBOL programming was a sensible means of solving the government’s Y2K problem.) Cost savings are also an advantage of using the shadow workforce, although those savings are suspect if contracts are awarded for political reasons or to contractors who are near-monopoly suppliers.Yet use of the shadow workforce may at other times inhibit government performance and efficiency, particularly if shadow workers are used merely to evade head counts or to avoid the red tape of internal hiring and work rules or to conceal inadequacy or to provide a scapegoat if mistakes are made or performance is poor. Further, contract workers are not subject to the same standards of merit or accountability, nor are government’s core competencies well understood. Essentially, appropriate use of the shadow workforce can be difficult to determine and in conflict with political and management incentives.

Light’s analysis of the true size of government as measured by the true size of the federal workforce is detailed, insightful, and thorough. It is also a study of the power of politics to influence the perceived size of the federal workforce and to thwart attempts to institute commonsense workforce management practices for the civil service and for shadow workforces. The True Size of Government will appeal to students of political economy, especially those with an interest in the size of government, who will likely find the first three chapters more interesting than the last three. Similarly, the book will appeal to students of policy management, who will likely find the last three chapters of greater interest. All readers will be well informed on the lack of transparency in federal workforce size and policies. For the majority of citizens, however, rational ignorance will continue to prevail, enabling politicians to continue to understate the size of government with impunity. Light concludes by saying that a “dose of reality on just what it takes to run the government is long overdue” (p. 196). I agree. Nevertheless, few citizens have the incentive or desire to take the medicine.