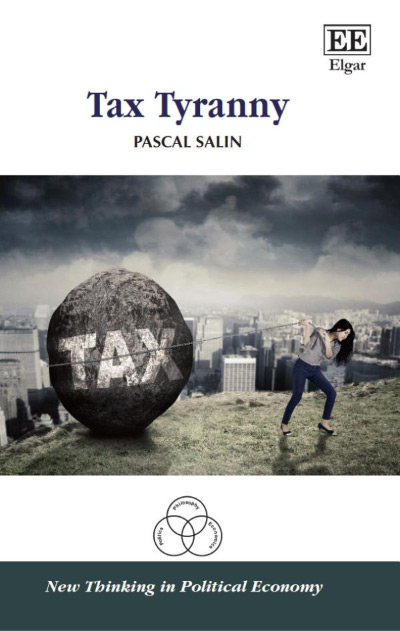 Tax Tyranny
By Pascal Salin
Hardcover Get eBook
This book review appeared in the Spring 2022 issue of The Independent Review.

Although Tax Tyranny was published in the Elgar series New Thinking in Political Economy, it is actually the edited version of L’arbitraire fiscal, Pascal Salin’s highly praised book from 1985. The new version—La tyrannie fiscale—saw the light in France in 2014, and the author recently translated it into English. The result is worth the effort: English-speaking readers will be spared the frustrating debates and mathematical virtuosities that have characterized the recent literature on optimal taxation, learn a great deal about the distortions created by all sorts of taxation, and acquire important insights into how to make taxation less unfair and to restrain the taxman’s all but unlimited greed.

Salin develops his discourse following three main themes. He discusses the legitimacy of taxation, emphasizes its cost, and sheds light on the tax structures currently prevailing in most developed economies. In regard to legitimacy, the author takes an uncompromising Austrian view: no taxes are legitimate unless they are explicitly approved by the taxpayer. Of course, nothing prevents an individual from buying goods and services from the state. However, the author relentlessly emphasizes that the purchase must be voluntary. Whereas the act of consent transforms taxation into a set of contracts, the lack of consent makes taxation a form of oppression (theft). In particular, taxes encroach upon private-property rights and violate the individual’s freedom to choose. Although these points have been the mainstay of free-market economics for a very long time, Salin’s passionate approach offers a fresh view on what these concepts mean in today’s societies. For example, income taxes amount to an unjustified appropriation of one’s labor services, the sales of which are allowed only if a substantial fraction of their monetary equivalent is transferred to the taxman. At the same time, wealth taxes encroach upon the resources one has likely set aside to finance future consumption or investments or to face hardship in case of need.

In a similar vein, Salin reminds us that taxation violates one’s freedom to choose from two different angles. First, taxes distort the price structure and affect how people employ their purchasing power to meet their preferences. And second, taxes finance public expenditure, which boils down to forced altruism and to the compulsory purchase of services that many people might want to buy from other, more-efficient suppliers or that they would rather buy in different quantities or with different features. The most prominent examples are state pension programs, nationalized health services, and education.

Not surprisingly, the cost of taxation plays an important role in the book. Chapter 1 is aptly entitled “The Destructive Nature of Taxes” and shows the different ways destruction takes place. By appropriating a significant portion of individuals’ income and wealth, the taxman discourages them from producing and encourages them to stay idle or engage in less-desirable activities in order to avoid or soften their tax burden. These elusive activities involve a reduction in the volume of exchanges, which play a key role in the creation of wealth. Furthermore, when taxes are turned into subsidies to producers, they encourage would-be entrepreneurs to rely on the privileges offered by the state authorities and thus to reduce their efforts to earn what it takes to be efficient and competitive. When taxes finance the goods and services handed out for free or at way below market prices, they encourage households and individuals to overconsume, squander scarce resources, and cut their working effort to earn what it takes to meet their own needs and those of their loved ones (e.g., their children’s education). This process is what Salin aptly calls the “double destruction of wealth” (p. 9), which of course ends up a recipe for ruin in a vicious circle. As production falls, the tax base shrinks, and the state reacts by further raising the tax pressure in order to prevent tax revenues from falling. As a result, production falls even more, and the threat of economic and social disaster becomes concrete.

Consistent with his previous arguments, therefore, Salin concludes that lowering taxes is the best public investment (p. 10), a statement that begs the question why policy makers find it so difficult to understand this simple truth and what can be done to reverse the trend. The author offers a persuasive explanation of the policy makers’ perception of taxation and opens a promising agenda for future research. Let us have a closer look.

Of course, it doesn’t take a Ph.D. to understand that moving backward along the Laffer curve, from the downward- to the upward-sloping section of the curve, pays hefty dividends in terms of growth and individual freedom. Put differently, the lower the tax pressure, the greater the rewards to one’s working effort and the larger the tax base. By reducing tax pressure, politicians would likely get more tax revenues and more votes from grateful taxpayers. However, Salin adds, it takes time before the economy responds to lighter taxation, whereas the beneficiaries of public expenditure get the hit immediately, and the traditional politician has no time to spare: elections are often around the corner, and therefore he cannot afford a temporary drop in revenues. In fact, he has an incentive to play demagogue, further raise tax pressure on the high-income earners, and kick the can down the road: future voters will pay the price, and future politicians will make new promises. Of course, Salin is correct. He also adds—rather optimistically, perhaps—that policy makers could finance a temporary budget deficit by borrowing money. During the past decades, politicians have indeed resorted to public debt to finance the budget gap. The figures show that public debt has been on the rise during the past twenty years in most countries and that the Eurozone is no exception, despite the so-called Maastricht rules. Nonetheless, one must acknowledge that tax revenues and tax pressure have not fallen: for example, according to Eurostat, the ratio of tax to gross domestic product in the Eurozone rose from 39.7 percent in 2002 to 41.5 percent in 2019.

Put differently, it seems that there is no way out. Rather than resorting to debt in order to reduce taxation, politicians borrow money to increase expenditure, and most of the time the occasional outcries against exceedingly heavy taxation are overshadowed by the requests for “better” spending (whatever that means), not for less spending. In this light, one hopes that Pascal Salin’s future work will produce some figures and provide his avid readers with a closer look at individual countries. For example, it would be interesting to know more about the shapes of the Laffer curves through time (the short- and long-run effects of a tax change on tax revenues); about how the shape of the Laffer curve is modified when the observer moves across the various kinds of taxes; or about what caused the decline in tax pressure experienced by some countries at some points—during, say, the past decade.

Despite the picture offered by the real world, Salin’s (moderate) faith in a better future surfaces at the end of the book, where he speculates on what can be done to make taxation less unfair and possibly to restrain policy makers’ discretionary power.

In regard to the first issue, the economist must solve a moral a priori. If one assumes that taxation is inevitable—that it is not the price one pays for goods and services but rather what the government takes in order to maintain itself and feed its rent-seeking activities—then taxation can follow two principles: the taxman can go for the money wherever he finds it, or he can work out a story about equal sacrifices, whereby the pain inflicted by each dollar given to the taxman falls as the taxpayer’s income or wealth rises. Pascal Salin suggests a third possibility, which consists in taxing the difference between income and savings. I will let the reader ponder the pros and cons. Of course, Salin’s proposal has some advantages because it avoids the double and triple taxation of one’s income and is easy to administer. Surprisingly, Salin rejects a consumption tax, which would follow the same principle and have one further advantage: because it requires no tax declaration, it prevents the taxman from prying into one’s accounts. On the negative side, a consumption tax necessarily assumes that one’s tax duties are proportional to one’s welfare and that one’s welfare is defined by the value of one’s market transactions. With this assumption, however, one must engage in some sort of pseudo-utilitarian conjecture and will most likely end up mired in the utilitarian nonsense that Salin has taken great pain to underscore throughout his book.

Salin’s efforts to rein in the policy makers’ greed is perhaps the only case in which he deviates from the Austrian line of thinking and comes closer to the classical liberal tradition, which has faith in decentralization and constitutional reform as effective straitjackets against abuse by legislators. Salin is perhaps right. Fiscal constitutions and tax competition within the nation-state may indeed lead to less-unbearable tax burdens. Yet history shows that tax cartels have been more successful than tax competitors. Besides, why should a policy maker tie his own hands and disappoint all those voters who rely on public expenditure? In fact, the discussion is open, and Salin’s next book will perhaps shed light on this part of the debate. That said, although future new insights on economic constitutional design are badly needed, this book remains a must for all those who want to have a clear view on modern tax systems, on the damages they create, and on the kind of opposition that sensible reform projects are going to meet.