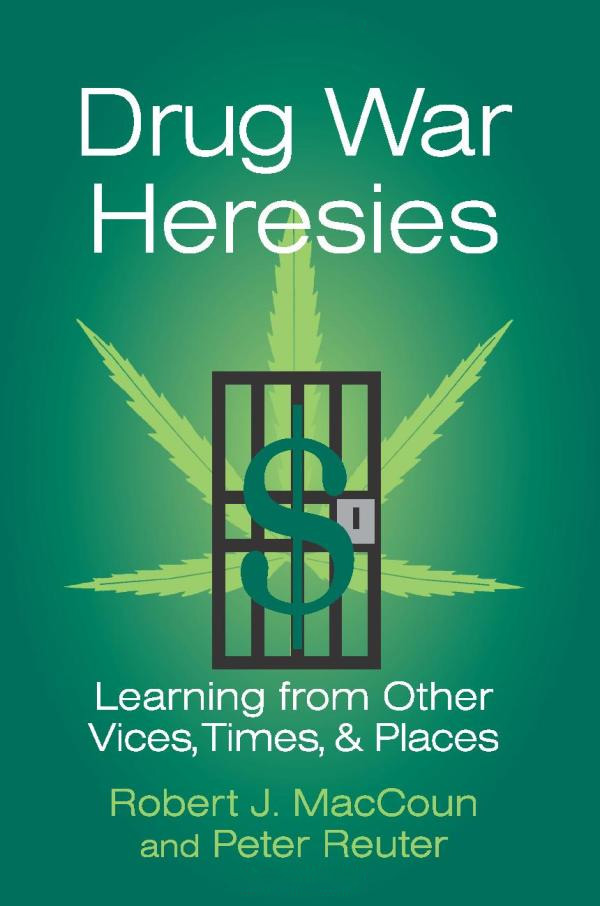 In Drug War Heresies, Robert J. MacCoun and Peter Reuter ask whether drug prohibition makes sense and whether legalization might achieve a better balancing of the costs and benefits associated with drugs and drug policy. They draw on a broad range of social science literature, and they emphasize the lessons provided both by drug prohibition in other places and by prohibitions of other goods, such as alcohol and prostitution. In discussing this evidence, they raise most of the key issues that should be considered in evaluating drug policy. Their book is an excellent starting point for anyone who wishes to understand the debates about prohibition versus legalization.

MacCoun and Reuter make a compelling case that many evils typically attributed to drugs result instead from drug prohibition and its enforcement. According to their analysis, prohibition causes increases in property crime because users face elevated prices; increases in violent crime because traffickers cannot resolve disputes using the courts; diminishments of civil liberties owing to the difficulty of detecting crimes without natural complainants; increases in corruption of police and politicians; disruption of countries that produce coca and opium; diminishments of users’ health because of poor quality control; increases in the spread of HIV because of prohibition-induced restrictions on clean needles; excessive restrictions on medical uses of drugs; and reductions in respect for the law bred by widespread violation of prohibition—among other consequences.

And yet the authors do not endorse legalization. They find great fault with the heavy emphasis on criminal sanctions in current U.S. prohibition, and they believe substantial deescalation to, say, the level of enforcement in western Europe, Canada, or Australia would diminish many of the harms of prohibition while causing only small increases in drug use. Still, they do not endorse legalization. Why not?

Their position rests on four arguments: that moving from weak, European-style prohibition to legalization would produce a substantial increase in drug use; that this increase would be a bad thing; that most of the benefits from legalization are achieved simply by deescalating prohibition; and that the effects of legalization are uncertain.

The first part of their argument—that legalization would produce a substantial increase in drug use relative to weak, European-style prohibition—is not fully convincing. They emphasize that, considering different prohibition regimes, one finds little evidence that more vigilantly enforced prohibitions are associated with lower drug use. Yet they conclude that going from European-style prohibition to legalization would produce a substantial increase in use. They base this conclusion for the most part on experience in the Netherlands, where survey measures of marijuana consumption show a noticeable increase during the period when marijuana became de facto legal.

MacCoun and Reuter’s inference seems too strong, for several reasons. First, the laxer treatment of marijuana and the increased consumption that have occurred in the Netherlands might reflect changing attitudes toward marijuana rather than one’s causing the other. Second, the gradually increasing “legality” of marijuana might have increased measured consumption for a given level of true consumption because the less stigmatized an activity, the greater the likelihood of honest responses to surveys. Third, even under the Netherlands’ relatively lax regime, the extent of marijuana use appears to be approximately the same as in the United States.

Despite these qualifications, the authors’ concern that legalization might lead to a substantial increase in drug use cannot be dismissed: prices would likely fall, advertising would increase (although, under plausible assumptions, such an increase would have mixed effects), and social stigma would decline (although this factor might be offset by removal of the forbidden-fruit effect). MacCoun and Reuter are therefore correct to criticize legalizers who simply assert that use would not change under legalization, and they are correct that an intellectually honest defense of legalization should be robust to the possibility that use might increase substantially.

The second part of the authors’ thesis, that increased use resulting from legalization is undesirable, is also arguable. Economists and libertarians typically assume that voluntary choices increase consumer welfare, even if such choices involve addiction and risk. Hence, any increase in drug use that results from legalization would be a benefit rather than a cost, setting aside negative third-party effects (externalities).

MacCoun and Reuter acknowledge this view, but they do not endorse it. Rather, they describe their own perspective as “soft paternalism”; they think policy should attempt to protect not just children or the mentally ill from drugs, but also adults to the extent that “addiction” makes individual choices something other than voluntary. Those who do not share the paternalistic perspective on drug use naturally will find the authors’ fears of increased drug use misplaced. More important, however, MacCoun and Reuter potentially overstate the negatives that would accompany increased use under legalization, even from the paternalistic perspective.

One reason to downplay paternalistic concerns is that the increased consumption resulting from legalization is likely to differ from that which already occurs under prohibition. In particular, those persons who are susceptible to addiction and who are willing to risk arrest and jail, not to mention products of unknown quality, are probably the ones already using drugs; the more risk-averse persons who would use drugs responsibly are likely the ones currently abstaining.

A different reason to downplay the risks of additional consumption under legalization is that the effects of drugs on irrational or myopic consumers are likely to be smaller under legalization than under prohibition. The lower price under legalization means that a drug habit would not force users into poverty or a life of crime. The absence of criminal sanctions means that drug users would risk only the (oft-exaggerated) health consequences of drug use, not jail. And legalization would reduce the forbidden-fruit allure of drugs, which is probably strongest on the myopic. MacCoun and Reuter recognize these issues, but they perhaps take them too lightly.

Reasonable people therefore can disagree with the authors’ conclusion that, relative to weak prohibition, legalization would cause a large and undesirable increase in drug use. Even if we accept their conclusions, however, a puzzle remains. MacCoun and Reuter readily acknowledge that legalization would reduce many of the harms caused by prohibition itself even while allowing an increase in consumption: Why do they conclude that on balance the reduction of prohibition-induced ills is outweighed by the increase in drug consumption?

Part of the answer is their view that mild prohibitions have relatively few of the negative consequences of strong prohibitions and that therefore the main benefits of legalization are achievable without legalization. They are correct that the magnitude of the harms of prohibition depends strongly on how strictly it is enforced—an underappreciated point that they rightly emphasize.

Also unclear is why mild prohibitions should have mild effects in causing prohibition-induced ills while having substantial effects on drug consumption. MacCoun and Reuter maintain that legalization would allow drugs to be “commercialized”—made widely available and heavily advertised—which they believe would expand use. That outcome is possible, but they have not made a convincing case. Drugs are widely available even under strict prohibition, and advertising plausibly produces brand differentiation and higher prices, with only modest effects on overall use.

The authors’ final claim is that legalization is too risky because the outcome is uncertain. They are correct that uncertainty exists, but they overstate its degree. Remember that, according to their analysis, legalization would have numerous beneficial effects; the precise amounts and value to society may be difficult to quantify, but the number and variety are legion. The only uncertainties that go against legalization relate to the amount to which consumption might increase and the extent to which such an increase would be a problem. If one views the increase as desirable, then all the effects of legalization are positive, and uncertainty about magnitudes is irrelevant. If one views the increase as undesirable, the net benefit of legalization is indeed “uncertain.” Still, it is surprising that MacCoun and Reuter are willing to give up a broad range of unambiguously positive effects because legalization might cause an increase in drug consumption of sufficient size and negative quality to outweigh all the benefits.

All of the preceding, however, amounts to quibbling. The authors’ basic points move in the right direction. They have done a great service in carefully, honestly, and scientifically considering both theory and evidence on the effects of alternative drug policies. Room remains for reasonable persons to disagree about certain pieces of evidence, but if more persons were to analyze drug policy as dispassionately as MacCoun and Reuter, both drug policy and the country would be in far better shape.

Jeffrey A. Miron
Boston University and Bastiat Institute
Drug WarFDA and Drug RegulationGovernment and PoliticsLaw and LibertyThe Nanny State
Subscribe Buy This Issue Get the App