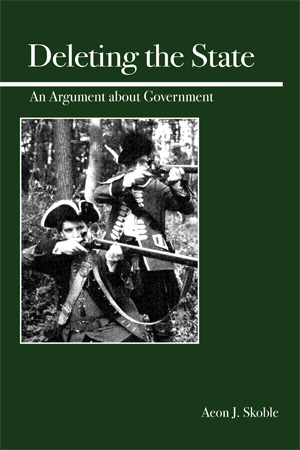 Deleting the State
An Argument about Government
Aeon J. Skoble
Paperback
This book review appeared in the Spring 2009 issue of The Independent Review.

Aeon Skoble presses the argument for anarchism in his short and readable book Deleting the State. In general, anarchists argue for their view by arguing against the legitimacy of the state—that is, against government in the usual sense of that term—which is hardly a surprise, given that anarchism is the view that society should not have a state. What is wrong with the state? It is, of course, a monopoly of the use of coercion in the sense that no one else is permitted to use coercion without the government’s approval, and the government is permitted (so it thinks) to use coercion against all if they try to do anything it disapproves, including using coercion privately even when it is for purposes the state does approve.

Both the anarchist and the “minarchist”—the defender of the “minimal state”—accept that the government’s only legitimate purpose, if indeed it has one, is the prevention of private coercion. So can the state be “deleted” or not? Skoble holds that if it can be, then, at least prima facie, it should be. The two sides agree that “coercion is something to be avoided where possible.” As Skoble notes, however, with regard to the “where possible” condition (p. 20) the two camps part company.

Government does wrong, according to Skoble, simply by using coercion, which is “detrimental to human freedom, and freedom is to receive the highest priority among political values. . . . The anarchist criticism, then, is that given this view of coercion and state power, such a justification cannot be provided coherently” (p. 36). By this statement, he does not mean that coercion can never be justified. If A attacks B, B may defend himself by such force as necessary. B’s wielding of defensive force may either be regarded as not coercive or be termed justified coercion. Skoble does not say clearly which view he takes on this matter. If we point a gun at a robber, and he concludes that he should desist from his plunder, have we not coerced him? Legitimate coercers would be those who coerce only persons who are guilty of the coercion of innocents. Such defenders may act either privately or on behalf of private organizations or as agents of states. If we agree that they are indeed coercing would-be robbers and murderers, then coercion can be justified, and the question is only whether any institution’s monopoly of coercion is justifiable.

A main issue is whether what Skoble calls the “Hobbesian fear”—the fear that without a state institution to deal with the bad guys, they will win or at least get out of hand—is justified. He argues in many interesting ways that it is not.

He maintains plausibly that the state is “essentially coercive.” Its coercions may be justified, however, if they are confined to dealing (to a permissible extent) with illegitimate private coercers. The anarchist must argue that the state simply cannot, so long as it is a state, meet these requirements; it will inevitably coerce innocent persons or coerce guilty ones excessively. Although making this argument is difficult, the anarchist has a strong point going for him: taxation. If the state cannot function without taxation or what amounts to it, which is a highly plausible claim, then the presumption would appear to be that no taxed person is innocent—a hugely implausible position. So the state bears a heavy burden of justification.

Well-known libertarian defender of the state Tibor Machan proposes a state that somehow allows nonjoiners to remain outside it. How this arrangement might work is, as Skoble says, obscure; meanwhile, however, Machan rests his case on the thesis that a “final authority” is necessary because without one, some conflicts might go unresolved. Skoble proposes that this argument is not a decisive refutation, but only a challenge for the anarchist. Can conflict resolution proceed in the absence of the state’s monopolistic final authority? Claims that it cannot do so, he suggests, require a version of the Hobbesian fear.

Skoble discusses David Gauthier’s familiar analysis that the Hobbesian “state of nature” is essentially characterized as a multiperson prisoner’s dilemma game. Cooperation is better than mutual noncooperation, yet individual noncooperation dominates individual cooperation. Although noncooperation may dominate in isolated cases, the case for rational cooperation becomes extremely strong when we have the open-ended repeated dealings typical of societies. If this argument were the end of the matter, then Skoble’s discussion invoking Robert Axelrod and others would probably settle it: in the long run, cooperation is a more rational general strategy. The case is strengthened further by the work of Bruce Benson, among others, in providing historical evidence of how anarchic criminal justice worked well. So the claim that resolution of significant conflicts is simply in a rational person’s general interest has a strong basis.

Skoble appears unaware, however, of significant work in which the question is broached as to whether state-of-nature situations might not be more like the game of chicken than the game of prisoner’s dilemma. If they are, the dominance of a mutual-cooperation strategy is not so clear.

In a recent article (“Government: Unnecessary but Inevitable,” The Independent Review 8, no. 3 [winter 2004]: 325–42), Randall Holcombe argues that the state, though indeed not justified, is nevertheless inevitable. The gangs that make up states achieve power over people because that power is what they want for their own purposes, not because of some powerful urge toward social justice. Maybe social justice is a mask: such gangs get people’s votes in democracies because they hood-wink people into thinking that what they give them is justice. So, Holcombe suggests, arguments for the illegitimacy of the state are simply irrelevant, and we have no choice but to put up with the state. Skoble does not consider such arguments. The book would be stronger if he had done so.

In sum, Skoble considers two issues. First, can we argue productively against defenders of the state, or are our premises so far apart that we will simply talk past each other? Skoble maintains that such debate is possible, although he considers a rather narrow segment of the literature to support his claim and offers no fundamental arguments against mutual incomprehensibility. Second, if arguments against the state are so strong, why do states exist everywhere? Here Holcombe’s views need to be taken seriously, but, as noted, Skoble does not directly consider them. He does point out, however, that anarchists are saddled with negative connotations of the word anarchy that are hard to shuck off. One such connotation pertains to the specter of political violence that so-called anarchists employed in the late nineteenth century. Skoble takes a two-pronged approach against political violence. First, violence against modern governments, especially those as entrenched and secure as the U.S. government, is simply futile. Second, in the process of trying to use violence against the guilty, we will inevitably end up using it against the innocent—the very problem that led us to oppose government in the first place. He concludes that “violence is not justified in a nominally liberal democracy,” adding that “[d]eleting the state means something more effective than violence: it means deciding the state is not necessary.” If we can reach thoughtful people with that message, then we “point the way towards the continual need to scale back the scope of state power” (p. 119).

Deleting the State is easy to read, and it deals with major aspects of the subject. In a short book, of course, there is inevitably more to be said, but Skoble’s work is a good place to start for those who have not yet looked into the serious literature on the subject.