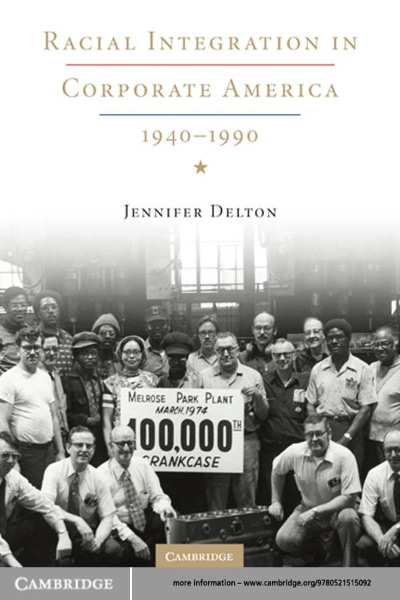 Racial discrimination in the workplace has received much attention from social scientists in several disciplines. Labor historians have focused on whether unions have been a help or a hindrance to workplace integration. Sociologists who study social movements have analyzed the role of groups such as the Urban League and the National Association for the Advancement of Colored People in combating discrimination. Political scientists have examined the impact of civil rights legislation.

In Racial Integration in Corporate America, 1940–1990, historian Jennifer Delton looks at corporate America. According to Delton, “Historians have attributed the racial integration of American workplaces in the late twentieth century to activists, the state, and labor unions. They have not only ignored corporations’ contributions to integration but they have also portrayed them as impediments to it.” She goes on to announce her bold argument “that American corporations played a significant role in opening the American workplace to racial minorities” (p. 3), and she devotes the rest of the book to backing this argument with an examination of corporate leaders’ intentions and actions both before and after the modern civil rights movement.

Corporate executives of the 1940s and 1950s saw the value of racial integration from two very different perspectives. The first perspective reflected the idea that fair employment is good business. According to these executives, racial discrimination harms the bottom line. Excluding black workers or eschewing black consumers is irrational because it leaves profit opportunities untapped. For example, one advertising executive defended his decision to hire a black man in 1952 by saying, “I’m not a crusader. This is a cold calculated move on my part for the dollar sign only. I was not pushed. I was not shoved. I was only moved by the dollar sign” (qtd. on p. 47). Delton gives numerous examples of executives who made such arguments, but she still doubts whether fair employment was actually profitable at this point: “if fair employment was really good business, that is, profitable, more employers would have practiced it. The truth was that effective fair employment policies required elaborate planning and costly implementation that challenged both traditional racial norms and ascendant color-blind ideals. Fair employment was disruptive and difficult to oversee, and it rarely improved the bottom line. This is why only a handful of large corporations in the 1940s and 1950s pursued it” (p. 43). The importance lay not in the actual effectiveness of these policies, but in the example their adoption set for smaller businesses. Corporate America had given the green light to racial integration.

The other early proponents of integration, looking at things from a second perspective, were crusaders from whom the “good business” execs tried to distance themselves. Edward Bernays, the father of public relations, flaunted his progressive ideals on race and encouraged his clients to hire black workers and to connect with black consumers. Delton attributes this approach to the post–New Deal “liberal consensus” and the pressures of the Cold War. Racial intolerance was an embarrassment to the United States, where the ideology of freedom and equal opportunity was taken very seriously. Again, as Delton is careful to point out, “This does not mean that they were free of racism but that racism was incompatible with their vision of the world in a way that it hadn’t been 50 years before” (p. 91).

Delton’s discussion of the individual corporations that led the way to workplace integration is especially fascinating. She gives us new insight into the origins of the human-relations departments so common in corporate America today. Although it is often assumed that human-relations departments arose as a result of the labor-management conflicts prevalent in this earlier era, many of the academics who composed the human-relations movement actually had backgrounds in race-relations research. According to Delton, “Almost all of [the University of] Chicago’s CHRI [Committee on Human Relations in Industry] had some training or background in race relations” (p. 108). This training would serve them well as corporations began their drive to integrate their workforce.

Delton makes case studies of several prominent corporations. At International Harvester, Vice President of Industrial Relations Ivan L. Willis led the way to integration by hiring Sara Southall as supervisor of employment and services. Southall got her start at Hull House and brought a progressive attitude with her to the corporate world. She initiated and oversaw the implementation of the company’s fair-employment policy. The implementation was not as simple as decreeing a nondiscrimination policy, and many obstacles were encountered along the way. Experts were very careful about how they approached integration, suggesting, for example, that blacks be hired first in white-collar positions because white-collar workers were secure in their social status. Only afterward did managers hire blacks in blue-collar positions because the white workers no longer feared that their jobs had become “negro work” (p. 118). With careful planning, International Harvester successfully integrated its Memphis and Louisville plants with little resistance in the 1950s. Looking at all the cases, Delton makes a remarkable observation: “Together, the centralized record keeping, black recruitment, plantwide seniority, and training programs added up to what we now recognize as ‘affirmative action,’ positive actions designed to increase the number of black employees in traditionally white positions” (p. 147).

The most interesting case study in the book by far pertains to the National Association of Manufacturers (NAM). The NAM is usually associated with business conservatism. The organization’s free-market ideology made it a staunch opponent of the New Deal and notoriously antiunion. Characterizing the NAM as conservative, however, would be a mistake. In regard to human relations and race issues, it was one of the most progressive organizations of its day. Delton tells us that “[d]espite the extremism of the NAM leadership during the fifties, its Industrial Relations Department endorsed the ‘human relations’ approach to management. Based on the idea of ‘social interdependence,’ the human relations philosophy was fundamentally at odds with the traditional conservative values that the NAM represented” (p. 198). She advances two theories to explain what she sees as this “incongruence.” The first is that the NAM simply saw another way to subvert unionism. The second is that the NAM was not as ideological as historians make it out to be. I would propose a third explanation: the NAM’s conservative (more accurately, libertarian) stance on economic policy in no way meant that it took a “conservative” stance on industrial or organizational management strategies.

Delton otherwise does an excellent job of contrasting the free-market, antiunion NAM with the same NAM that “endorsed fair employment with regards to racial minorities and women beginning in 1941, restated its commitment to equal opportunity in the 1950s, and helped implement the equal opportunity legislation of the 1960s” (p. 194). In the early period, the organization encouraged nondiscrimination and took no position on fair-employment practice laws. When civil rights legislation became inevitable, the NAM led the way in encouraging compliance and looking for mutually agreeable solutions. The organization never opposed civil rights, Delton argues, but rather “opposed the dominant liberal version of civil rights” (p. 216).

In the post–civil rights era, government efforts to enforce equal opportunity through Title VII of the Civil Rights Act posed fewer problems for business corporations than did the Great Society programs. Efforts in the 1960s and 1970s to subsidize training of the “hardcore” unemployed required much greater resources, but it is unclear whether they had a positive impact. Delton uses Control Data Corporation as an example of a new industry, unencumbered by the old way of doing things, which was able to “throw out the book” on traditional hiring and promotion practices. It was moderately successful, but the reader is left wondering how much of this success was attributable to government subsidies for research, subsidies for hiring the unemployable, and a union-free environment. As Delton notes, “it was regularly observed that the integration and advancement of minorities in the workforce occurred smoothly in nonunionized parts of industry” (p. 273).

Jennifer Delton joins the ranks of scholars such as Frank Dobbin, Anthony Chen, and Lauren Edelman who have given us new insights into the history of workplace integration. One such insight is that corporations, despite constant vilification of them by some activists and historians, were in many regards at the forefront of racial integration. Another insight, related to the first, is that corporations were the first proponents of what is now called affirmative action. Although affirmative action is currently a politically charged issue among public-affairs commentators, the business community has been practicing it for decades. Delton observes that the “backlash against affirmative action in the 1980s came from politicians and intellectuals, not the corporate world” (p. 278). Racial Integration in Corporate America is a wellresearched, valuable, and much needed contribution to an often misunderstood aspect of U.S. history.