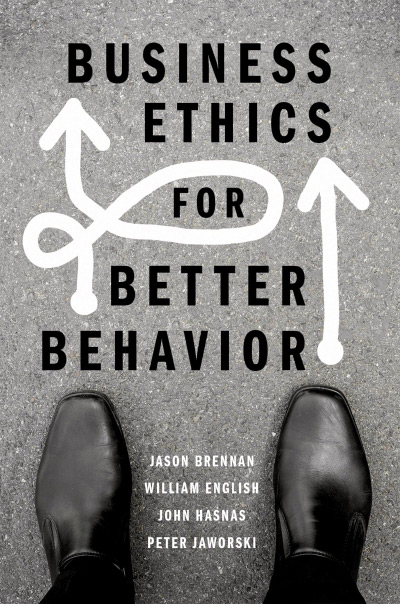 In this valuable and insightful text, the four authors, all faculty members of Georgetown University’s McDonough School of Business, set forth a novel treatment of business ethics that will prove helpful to students and teachers of the subject, as well as those engaged in enterprise. Informed by economics, law, politics, and recent empirical studies in psychology and management, the authors urge two key notions: business is a force for good, and unethical conduct is less a problem of selfishness than moral confusion, misguided incentives, or ethical blindness and self-flattery. These two claims have received scant notice in most business ethics texts, whose focus, typically, rests on the application of ethical theories—utilitarianism, Kantianism, or virtue ethics—to business conduct and cases or on the explication and significance of notions of corporate social responsibility (CSR) and stakeholder theory. The former approach has its place, if done well, but the latter suffers not only from a blithe neglect of the nature of business but from the assumption that without the cloak of CSR or attention to stakeholders, business amounts to little more than ruthless advantage. The authors of Business Ethics for Better Behavior show, alternatively, how confusions, incentive structures, and psychological factors may inhibit good conduct in business.

The opening three chapters address our moral capacities and the nature of business. Chapter 1 suggests that the human being is “pretty decent overall” (p. 4, italics original), that business is a good endeavor, that easy appeals to ethical relativism are scarcely justified, and that ethics courses will not convert the evil-minded. In chapter 2, the authors remind us of the nature and benefits of business and they indicate, albeit a bit too quickly, that CSR should not be considered an essential requirement of doing business. The importance of a cause does not entail that everyone must contribute to its realization. The activity of business is presented in terms of trade, though it might have been helpful to explain more fully how business differs from other organizations. That said, the chapter does a real service in canvasing the beneficial results of for-profit trading: for example, electric lights, better health, and moral progress. In chapter 3, the authors address the chief concern of the book: wrongdoing is not, typically, the result of bad intentions but of moral stumbles, whether individual or sequential. To illustrate, the authors revisit how, in 1967, the B. F. Goodrich Company developed and delivered to the Air Force an aircraft brake that was known to be faulty. That no one in the company was willing to halt this miscarriage may illustrate, as the authors suggest, weak incentives and diffuse responsibility, but, one might add, it also manifests cowardice, weakness of will, and a truant integrity.

The authors devote the next three chapters to moral confusions. In chapter 4, they lay out five principles presupposed in any business transaction: abstain from coercion or physical threats; avoid fraud or “improper deception” (p. 49); honor all terms of a contract; treat “trading partners as full human beings,” showing them “equal respect as autonomous agents” (p. 51); and “bear ethical responsibility for [one’s] actions” (p. 52). The first three principles do seem, as the authors note, “built into” the activity of trade (p. 47), but the latter two less obviously so. The last principle indicates, abstractly, that entry into a market transaction does not discharge one of ethical responsibilities—for example, to refrain from deception (p. 52). However, the authors’ abstract construal overlooks more difficult considerations as to whether exaggeration, bluffing, or withholding information violate these responsibilities—or when. The fourth principle, “to treat all trading partners as full human beings” (p. 51), seems to apply to actual, not potential, parties to an exchange. The authors make no mention of what this principle demands of the merchant who sells candy to children, and they remain coy on its scope: if it “bears directly on questions of employment discrimination, diversity and affirmative action” (p. 54), the authors do not clarify whether it would inhibit or support these efforts. In the subsequent chapter, however, the authors profess the principle to prohibit discrimination in hiring “on the basis of race, religion, or sex” (p. 62), thereby converting a presupposition of actual exchange into a regulation that guides trade.

In chapter 5, the authors offer an additional principle of business: avoid exploitation. This is presented to overcome a confusion—often emerging in discussions of “sweatshop” labor—that equates exploitation with human coercion rather than constrained choices in parlous circumstances. In developing their account of exploitation, the authors characterize a business transaction as creating a “social surplus” (p. 65), an unusual phrase featured nowhere else in the book. If one party to a transaction “takes advantage of a weaker party to absorb an unfair amount of their mutually created product” (p. 65), then the transaction is exploitative. As to what counts as an “unfair amount,” the authors provide an unhelpful response: “a division is unfairly uneven when one party takes advantage of a vulnerability . . . to reap a disproportionately large percentage of the value of the transaction” (p. 66). They add two tests for exploitation: if the amount given to one party renders an escape from poverty unlikely or fails to compensate for a risk of serious harm, then the exchange is (probably) exploitative. A link, whether conceptual or empirical, between these tests and the “unfair amount” would have strengthened this account. Nonetheless, the authors rightly point out that employment of the poor is not in itself questionable; in fact, to oppose such employment without offering a better option for the poor does no one any good. Chapter 6 broaches another confusion, the equation of ethics and law. Drawing distinctions between private and public law, legislation and common law, the authors point out that legal obligations may not be ethical and that some ethical obligations may not be legal. When the law imposes unethical obligations, it is legitimate to consider whether to obey the law.

The middle chapters, 7 through 10, take up moral effects of incentives. In chapter 7, the authors describe how actions of real life, as opposed to decisions in a game such as the “Prisoner’s Dilemma,” create a “public record” that allows each person to choose with whom they want to interact (p. 106). If the desire for a good reputation has positive effects, it can also motivate appearances that are, in fact, less than beneficial. Firms must recognize that rewards for ethical conduct may weaken an individual’s internal motive to good conduct. This concern is developed in chapter 8, where the authors discuss financial incentives whose deployment may weaken norms otherwise enforced informally. To diminish the likelihood that managers will strategize for self rather than for the firm, stock options should be designed carefully. Collective action problems raise additional incentive issues, as broached in chapter 9, the first to offer helpful references to significant historical thinkers, such as Adam Smith, James Madison, Vilfredo Pareto, F. A. Hayek, Ronald Coase, and Elinor Ostrom. Within a firm it may be important to cultivate camaraderie, workplace transparency, and small groups. The firm should maintain an interest in ensuring the legitimacy of the industry in which it functions, thereby allowing the development of intra-industry norms to counter the appeal of short-term advantage that leads to long-term disaster—the tragedy of the commons. In chapter 10 the authors return to the problem of diffused responsibility, in which no one is incentivized to do what is right, a particular problem in large committees or in groups of much greater size, including a company’s shareholders. These problems are hard to fix, as the authors admit, but it is worth considering that in these cases the traditional moral appeal may be as powerful as any putative structural reform.

The final three chapters focus on moral and psychological factors that inhibit good conduct. Chapter 11 turns to blind spots: not only do we overestimate our own goodness, we often fail to perceive we are in a moral situation. This blindness may be attributable to a specific role, to conformism, or to shortcuts in perception. A “failure of awareness” (p. 198) is not easy to solve. In fact, one might add, this failure is the story of self-love recounted by distinct thinkers such as Augustine, La Rochefoucauld, Adam Smith, and Iris Murdoch. Even if we suffer some blindness, we still seek meaning, the great lesson of chapter 12. Meaningful work leads to greater productivity than non-meaningful, a point illustrated by a research project in which individuals were told to review brain images for anomalies. Those participants informed that their attention could save lives spent more time on the images than those told that their viewing records would be discarded. The illustration is helpful, though it is repeated, almost verbatim, some three pages later. In the final chapter, 13, the authors pivot from the so-called “SMART” business objectives—specific, measurable, achievable, relevant and time-bound—to the avoidance of “DUMB” values: disconnected, unincentivized, measureless, boilerplate. A company’s values should be connected to its enterprise, with employees incentivized to adhere to values both measurable and meaningful. This is easier said than done: values such as dispatch or precision may be easily measured; others, such as diligence and honesty, less so. The book concludes with an arresting section advising students what to do if they wish to run an unethical business.

This welcome, insightful, and engaging book utilizes effective illustrations in service to a genuine need: How might one avoid bad conduct? Richly informed, this book provides a refreshing contribution to a discipline, business ethics, whose practitioners often seem remarkably unsympathetic to business and unwilling to question reigning nostrums. Although the authors do not describe the book’s genesis, it appears to be compiled from classroom lectures. That said, more should have been done to develop, polish, and unify the approach, not to mention correcting textual infelicities, omissions, or errors. Because many students have little sense of an intellectual or historical inheritance, it is regrettable that there is but one chapter with explicit cues to thinkers of significance. Despite its value, the book manifests a kind of insouciant hurry, including an undistinguished cover that captures the perspective of someone gazing down at his unremarkable shoes flat against a gray background, a white arrow looping up the left side, a straight arrow up the right. It befuddles more than invites. Within this cover resides a great book, but it has not been brought out fully.