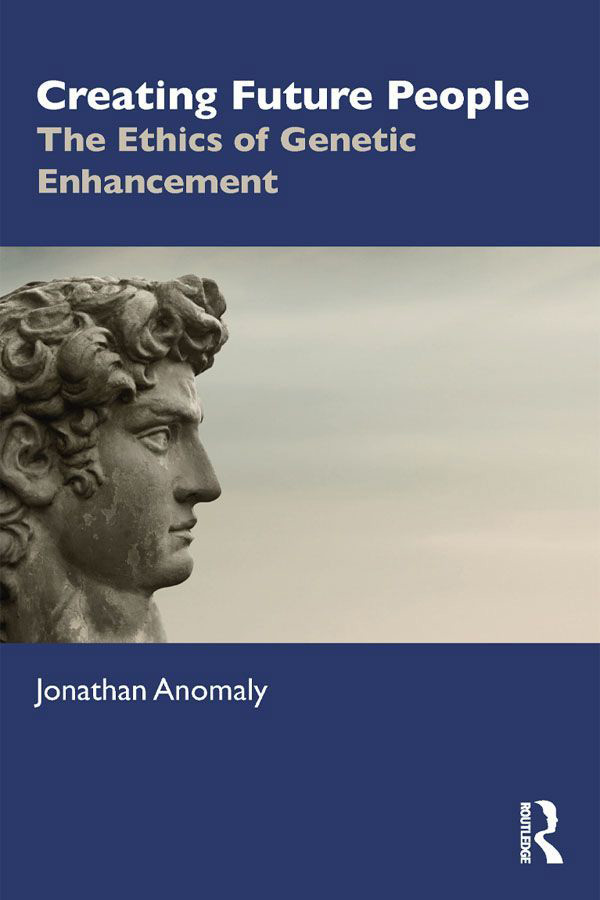 Creating Future People
The Ethics of Genetic Enhancement
By Jonathan Anomaly
Kindle Hardcover Paperback
This book review is a web exclusive for the Summer 2021 issue of The Independent Review.

In Creating Future People Jonathan Anomaly addresses the moral and political questions that arise from the possibility of genetic enhancement by focusing on “collective action problems in which the reproductive choices of each affect the welfare of all” (p. viii). To exemplify these problems, Anomaly offers the example of the option to enhance a child in a way that confers immunity upon her from a disease such as tuberculosis. Enhancing a child in this way might be attractive to her parents as they would believe that it would benefit her. If all parents reason in this way all children might become immune-enhanced. But it might also be the case that the population as a whole would be better off if there was more immuno-diversity within it.

Anomaly’s approach to the questions he addresses is cautiously optimistic. In each of the five chapters in Creating Future People he offers arguments in favor of “enhancing traits that might benefit future people” (p. viii). These traits include cognitive enhancement, moral enhancement (enhancing people to behave in pro-social ways), aesthetic enhancement, enhancing people’s health (immuno-enhancement), and (most speculatively) the creation of enhanced synthetic people.

At the start of Creating Future People Anomaly notes that it is “customary” in applied ethics to “skirt many of the difficult theoretical issues moral philosophers spend time on” and instead focus on a “simple and plausible way of making moral arguments” that appeals to “reasons” (p. ix). But this custom is more honored in the breach than the observance. The point of applied ethics is to offer answers to practical questions by applying insights that have been derived from addressing “difficult theoretical issues.” For example, the question of whether we should respect persons’ wishes after they die—a question that has practical importance for postmortem organ procurement—can be illuminated by considering the theoretical question of whether it is possible to attribute property change to non-existent entities: Can persons who are now dead be harmed or benefitted by current actions or events? Addressing practical ethical questions without engaging with the foundational issues that they raise runs the risk that one’s answers will be uninformed—and so unhelpful.

Does Anomaly’s skirting of theory undermine the value of Creating Future People? That depends on what one expects to gain from it. Creating Future People is an excellent introduction to some of the moral and political issues raised by the possibility of genetic enhancement. But when considered either as an introduction to the relevance of game theory for contemporary issues or as an original contribution to the debate over genetic enhancement it fares less well. This bifurcation is not surprising. There is no need to engage with philosophical theory to raise moral or political issues. But it is required to address them productively—just as elaborating game theory is required to provide a satisfactory introduction to it.

So far, so good. But Anomaly conducts his discussion as though parents would strategize only on the basis of the anticipated acts of other parents in their cohort. This approach allows him to treat this collective action problem as a Prisoner’s Dilemma. But this situation differs from a standard Prisoner’s Dilemma in (at least) two important respects. First, enhancing a child’s pro-social traits will (Anomaly claims) pay off positively for her independently of what others do. The question is thus not only whether (unenhanced) others will take advantage of her but whether the losses this would impose on her would outweigh the benefits that she would reap from her pro-sociality. Second, parents’ decisions would not only be guided by the expected decisions of others in their cohort. Their children will interact not only with their peers but with unenhanced older generations. The first enhanced children would thus be guaranteed to face persons who might be inclined to exploit their pro-sociality. That Anomaly recognizes neither of these complications impoverishes his discussion, whether it is considered as a contribution to the debate or as an introduction to game theory.

Anomaly’s impoverished discussions of moral and cognitive enhancement exemplify the primary structural problem that pervades Creating Future People. Although his focus is on the collective action problems that could arise from genetic enhancement few of the responses that he offers as possible solutions draw on game theory and those that do are underdeveloped. With respect to immuno-enhancement, for example, Anomaly’s position is simply that we should weigh the costs and benefits of its pursuit—no game theory is applied. With respect to the possible collective action problems raised by cognitive enhancement he spends just under a page sketching the standard libertarian view that people should be allowed to form their own political communities to allow people to experiment with different reproductive norms. There is nothing in this solution that directly addresses the collective action problems that he raises. And with respect to moral enhancement, Anomaly merely notes that the “dynamics of social choice must be studied carefully before theorists or parents can move from moral principle to individual action” (p. 32). Well, yes. But it would have been far more interesting had an actual solution been proposed and defended.

Creating Future People also suffers from a considerable degree of carelessness. Some of this is minor, as when Anomaly conflates procreative beneficence with procreative altruism (p. ix) and misuses the term “decimate” (p. 57). But sometimes Anomaly’s carelessness undermines his arguments. For example, he claims that appearing to be just would only be profitable if some people cared about justice (p. 29). This is not true. All that is required for the appearance of justice to be profitable is that people generally believe that others care about justice and so to earn their approbation reward people who appear to be just. No one need actually care about justice for an appearance of justice to be profitable. This misstep is striking in a book that focuses on game theory.

Anomaly also makes several exegetical errors. For example, he holds that William Hamilton “suggested” that “one of the main reasons sexual reproduction spread so widely among multi-cellular organisms is to combat infectious disease” (p. 58). But this view was not “suggested” by Hamilton at all. The paper Anomaly cites is a review article (by Hamilton and two co-authors) that notes that “predictions of parasite coevolution fit well with the known ecology of sex” (W.D. Hamilton, R. Axelrod, and R. Tanese. 1990. “Sexual Reproduction as an Adaptation to Resist Parasites (a Review),” Proceedings of the National Academy of Sciences, 87 (9): 3566). Anomaly also occasionally attributes to people views that they do not hold. In discussing the possibility that enhancement technologies will “allow large inequalities of ability to emerge quickly,” for example, he cites Allen Buchanan in connection with the view that the adverse effects of such inequalities could provide reason “to support the dispersion of a basic tier of enhancement technologies via government subsidies” (pp. 52–53, citing Buchanan 2011, Chapter 8). But this is not Buchanan’s view. The use of subsidies that he suggests in the chapter that Anomaly cites is to encourage the development (not dispersion) of promising innovations in situations where companies are limited to charging a “fair price” for their product. The subsidy is intended to counteract the reduced incentive to innovate that would occur as a result of the “fair price” replacing the higher monopolistic price that companies would otherwise secure through patenting (Allen Buchanan. 2011. Beyond Humanity? The Ethics of Biomedical Enhancement, Oxford: Oxford University Press, 260). And while Anomaly is strictly correct to hold that Buchanan believes that cognitively enhanced people “may have a superior moral status to those who are unenhanced” (as Buchanan grants that it would be possible to assume this), Buchanan does not believe this actually to be the case, as Anomaly’s account of his view implies. (Buchanan states that this assumption would be “dubious”; Buchanan 2011, 211.)

None of these criticisms of Creating Future People undermine its value as a book of interest to general readers. Anomaly’s writing style and presentation of the issues are engaging—and the book is a mere 89 pages, plus 4 pages of Appendices and a short Glossary. But his failure to develop his collective action approach to genetic enhancement and his argumentative and exegetical carelessness undermines its value for any academic audience. This is a great pity. A thorough and careful discussion of the moral and political issues raised by the possibility of genetic enhancement informed by a knowledge of game theory would have been a consummation devoutly to be wished. I wish that Anomaly had written that book and not this one.