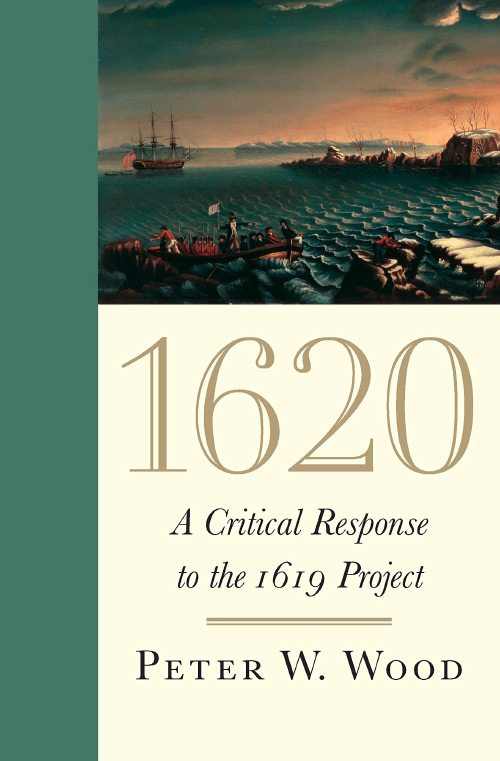 1620
A Critical Response to the 1619 Project
By Peter Wood
Kindle Hardcover Audiobook Audio CD
This book review is a web exclusive for the Summer 2021 issue of The Independent Review.

Every nation has an origin story. With 1620: A Critical Response to the 1619 Project,Peter Wood defends an understanding of American history that puts “the pursuit of the ideals of liberty and justice at the center of the story” (p. 200) against an attempted transformational narrative advanced by The New York Times’s 1619 Project. Wood’s critique of the Project uses an impressive array of materials, drawing on everything from the minutiae of seventeenth-century Reformed theology to the politics of twentieth-century textbook publication. In these divisive times, 1620 offers readers a prudential reminder to approach the past with a good deal of intellectual humility.

For those unfamiliar with the controversy, The New York Times Magazine published a special issue in August 2019. It argued that August 1619—when enslaved African people first arrived to colonial Virginia—is America’s true founding moment. The Project’s creator, Times reporter Nikole Hannah-Jones, denounced the founders as hypocrites, called the Constitution a proslavery document, and argued that our democracy’s founding ideals are false. Wood lined up quickly with a large troop of fellow critics. The economic historian Phillip Magness (The 1619 Project: A Critique. Great Barrington, Mass.: American Institute for Economic Research), one of their number, has compiled a comprehensive working bibliography of the numerous responses to the Project, by both supporters and detractors.

Wood makes clear the conflict’s high stakes. This is not a minor turf dispute over professional boundaries, fueled by the need to differentiate history from historically-minded journalism. Per Wood’s estimation, the Project is dishonest both as journalism and as history. It is, in his words, no less than propaganda fabricated by some on the progressive left who want to spread the idea “that Americans have grossly misunderstood the nature and origins of American society, and that slavery is the pivotal institution in American history” (p. 2). Framed in these stark terms, Wood’s 1620 is nothing less than a defense of the principles of the American founding as traditionally understood.

Wood describes his book as a “thematic response” (p. 2) to the 1619 Project with two primary goals: identifying the Project within its wider cultural moment and correcting its most egregious assertions. Towards the first goal, Wood offers an accurate portrait of the overarching design of the Project. The New York Times’s“cultural cachet,” as he puts it, has everything to do with the Project’s success as a “very adroit media campaign” (p. 117) designed to insert the themes of the 1619 Project into the American educational system. With ample financial support from progressive entities like the Pulitzer Center, the Project now comes replete with lesson plans for primary school educators.

Towards the second goal, Wood attempts to correct what he counts as the Project’s greatest factual inaccuracies. “The 1619 Project isn’t all bad,” Wood writes, “It is just wrong in crucial places” (p. 69). Those “crucial places” are the twin claims that slavery and capitalism are inextricably linked and that colonists fought the Revolutionary War to protect the institution of slavery.

On the relation between slavery and capitalism, Wood offers a devastating rebuttal to the Project’s arguments, which rely heavily on the sociologist Matthew Desmond. Desmond, who never divulges what he means by capitalism, draws on the work of so-called “New Historians of Capitalism” who tend to equate capitalism with acquisitiveness. As Wood points out, Southern slaveholders appear less capitalistic than Desmond would have readers believe. Not only did antebellum slaveholders consciously under-develop human capital, they did little to advance basic infrastructure and lacked the necessary entrepreneurial ingenuity of dyed-in-the-wool capitalists. Most damningly, Wood exposes the faulty GDP accounting practices—counting intermediary goods—that those new historians use to wrongfully claim that roughly half of the United States’ economic activity in the mid nineteenth-century was linked to slave-produced cotton. This is, I think, his book’s most useful contribution to the 1619 literature.

On the relation of slavery to the American Revolution, Wood’s rebuttal is only partly convincing. On the one hand, he articulately nuances The Times’s portrayal of slavery, which superimposes the conditions of nineteenth-century chattel slavery in the deep South onto seventeenth-century Virginia. Particularly useful is Wood’s contextualization of slavery within world history, revealing its antecedents in a world pervaded by slavery and other extreme forms of bondage. He is right to emphasize that enslaved African people suffered and labored under a variety of conditions and regimes for masters that could not force their human property into total submission. His point is especially well-taken that “Slavery was ignominious, not dehumanizing. Among those who suffered the restrictions on personal autonomy imposed by slavery, a very human spirit survived” (p. 73).

Wood should have pressed this further. Historians have long recognized that the practice of slavery evolved over two-hundred years and was never monolithic. The system of African chattel slavery that the 1619 Project describes found its roots in the bondage of white indentured servants and the capture of Native Americans in a series of bloody wars (see, for instance, John C. Coombs, “The Phases of Conversion: A New Chronology for the Rise of Slavery in Early Virginia,” William and Mary Quarterly 68, no. 3 [July 2011]: 332-360 and Margaret Ellen Newell, Brethren By Nature: New England Indians, Colonists, and the Origins of American Slavery [Ithaca: Cornell University Press, 2015]). Across time, enslaved people exercised their will when possible, resisted and rebelled at great personal and collective risk, and, above all else, forged an abundance of societies and cultures whose intricacies warrant differentiation. To recognize this fact is neither to minimize slavery’s brutality nor to apologize for those complicit in its continuance. Much to the contrary, it allows scholars to continue illuminating the lived realities, in all of their complexities, of the men, women, and children who lived and died as human property. Perhaps somewhat ironically, then, Wood’s portrayal of American slavery does more justice to enslaved Americans than does The New York Times’s.

To prove that Revolution was not a proslavery affair, Wood contends that Great Britain was not an abolitionist threat to slaveholding colonists. To do this, he picks apart the historian Alan Taylor’s claim that the Somerset case—a 1772 verdict that freed an enslaved man—ruffled the feathers of Virginian slaveholders before the Revolutionary War (see Alan Taylor, The Internal Enemy: Slavery and War in Virginia, 1772-1832 [New York: W.W. Norton, 2014]. Even though Taylor did not contribute to the Project, Wood goes to some lengths to discredit Taylor’s argument vis-à-vis his footnotes. According to Wood, Taylor’s one primary and three secondary sources were insufficient evidence. Wood might have been better served committing this attention to his own footnotes, which are lacking in crucial areas. Describing slavery as a “social death” Wood leaves out the seminal citation on the subject: Orlando Patterson’s Slavery and Social Death: A Comparative Study (Cambridge, Mass.: Harvard University Press, 1982).

To his credit, Wood does offer an alternative interpretation of Somerset: that the case caused little fuss in Revolutionary Virginia. Although a viable interpretation, his historical evidence is paltry. Citing historian Sean Wilentz, Wood supports his argument with the fact that only six colonial newspapers published reports on the case. Wood and Wilentz fail to acknowledge that an eighteenth-century newspaper’s place of publication was far from its final destination as colonists passed print media along a network that brought papers from Boston to Charleston, often the news was read aloud in coffeeshops known colloquially as “penny universities.” Six printings might have been more than enough to raise awareness in Richmond and Williamsburg. What is more, Wood fails to address a series of proslavery petitions in Virginia that linked the Revolutionary cause to a defense of slavery. The petitioners wrote in 1784 that “When the British Parliament usurped a Right to dispose of Property without our Consent, we dissolved the Union with our parent company.” They then go on to explain that their slaves are “a very important part of our property” (see Fredericka Teute Schmidt and Barbara Ripel Wilhlem, “Early Proslavery Petitions in Virginia,” William and Mary Quarterly 30, no. 1 [January 1973]: 133-146). This is not to say the Revolution was or was not motivated by proslavery sentiment, but that Wood’s characterization of it has substantial evidentiary deficiencies.

It is not enough to diagnose an illness; Wood recognizes the need to offer something by way of remedy. His recommendations are twofold. First, Wood outlines a robust public response that would have citizens take to the schoolboards and state legislatures to oppose the Project. More importantly, though, Wood believes that American history and civics requires a robust alternative to the 1619 Project: a 1620 substitution, if you will. In denying Hannah-Jones’s conception of the American past, Wood would restore the Pilgrims at Plymouth Colony to pride of place, hence the book’s title. He offers an origin story that places slavery within a grander narrative of America’s rise as a free nation, one closer “in proximity and spirit” (p. 24) to what he sees as our nation’s exceptional nature.

To be sure, Wood recognizes the limitations of 1620. He notes that the spirit of Plymouth cannot account for all developments in American history, given that its pre-Enlightenment actors lacked our modern natural rights discourse. That kind of self-awareness does not extend to all of 1620’s limitations, for he barely addresses the viability of Jamestown and its founding in 1607 as an alternative birth year for the nation. By proposing 1620 as the nation’s birth year, Wood risks projecting a glorified account of one group of colonist’s experiences onto the rest of the nation. The “New England model” of inclusive self-government that he wants to attribute to those colonists at Plymouth has all the more to do with the neighboring Massachusetts Bay Colony. Accordingly, his case for 1620 would be markedly stronger were it not cloaked in the same air of New England exceptionalism that Abram Van Engen (City on a Hill: A History of American Exceptionalism. New Haven: Yale University Press, 2020) describes in the scholarship of Perry Miller.

Where does that leave the American founding? Debaters on both sides will come away from 1620 with an insightful and multi-faceted critique of the Project as well as a thought-provoking alternative to 1619 as the starting point for a great nation. To those academic historians who continue researching America’s slaveholding past, Wood’s methodological reminders ring true: avoid ahistoricism and look backward with empathy and humility. When journalists and historians evaluate our society two-hundred years from now, there is no-telling what hypocrisy and injustice they might find. It is best practice, then, to judge those in the past fairly and honestly, just as we wish ourselves to be judged.