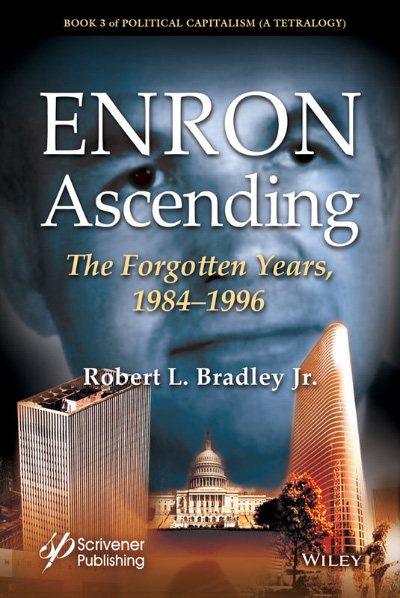 Enron Ascending
The Forgotten Years 1984-1996
By Robert L. Bradley Jr.
Kindle Hardcover
This book review is a web exclusive for the Summer 2019 issue of The Independent Review.

This book is the third volume of a tetralogy regarding the history of the now infamous Enron Corporation. Somebody, I have forgotten who, said of the great historian Paul Johnson, “I can grasp how much he writes, but I cannot fathom how much he reads.” One might suggest something similar to Robert L. Bradley Jr. I can fathom how much he saw but not how much he recorded, understood, and attempts to explain—and that is only being familiar with this single volume of the tetralogy. (The other volumes are titled Capitalism at Work: Business, Government, and Energy; Edison to Enron: Energy Markets and Political Strategy; and forthcoming Contra-Capitalism: Enron and the Post-Enron World.)

This volume is a sprawling wide-ranging work that does more than just document the history of Enron, the what. Bradley also attempts to provide a reliable, integrated world view spanning the social sciences to provide the why of Enron. Ken Lay’s enterprise, according to Bradley, “was the least-capitalist megacompany in modern U.S. history, creating its own model along the way” (p. 3, emphasis in the original).

Second, Conservative or Libertarian analysts dismissed Enron as the proverbial bad apple. Apologies were in order but not major regulatory reform. According to this take, the market punished the guilty and provided valuable lessons.

Be that as it may, Bradley suggests both positions have some validity. Enron was symptomatic of our culture and political economy, while at the same time it had little to do with capitalism. To reconcile these viewpoints requires a new term. According to Bradley, “[t]he syndrome of symptoms embodied in Enron’s life and death was contra-capitalism, a nonideological pattern of behaviors systematically antithetical to the moral, economic, and political precepts of classical liberalism” (p. 3).

This is the first place that I have seen this term used and it is not clear from this volume whether the author coined it. Nevertheless, Bradley lays out three corporate-capitalist management characteristics: The first is that pursuit of corporate profit through government-sanctioned coercion (rent seeking) is contra-capitalist because it makes exchange involuntary, if only for taxpayers subsidizing a particular business practice. In fact, according to Bradley, Enron relied on government in ways that went beyond simple corporate welfare.

Second, contra-capitalism includes reliance on legal (non-prosecutable) dishonesty, which breaches the counter party’s ability to enter into beneficial exchange. Here Bradley introduces the notion of “philosophical fraud”: behaviors that are merely devious, unethical, or delusory—all at the expense of fair dealing and mutually advantageous outcomes. Finally, and most interestingly, contra-capitalism subsumes violations of bourgeois moral virtues such as prudence, caution, humility, forethought, and frugality, that tend to foster profitable, sustainable production and trade. As Bradley points out, “classical liberals since at least Adam Smith have described, defended, and urged a character-centered moral view of business and free markets” (p. 362). Bradley is especially charitable towards Charles Koch and his Market-based Management style, which are very classical liberal-like.

Bradley, with relentlessness and thoroughness, demonstrates how Enron under Ken Lay evolved into the contra-capitalist firm it would become. One important behavior Enron exhibited that suggests philosophical fraud was its reliance on “an accounting change to recognize the revenue of long-term contracts not as cash received (the accrual basis) but on a present-value mark-to-market basis” (p. 364).

If abused, mark-to-market accounting amounts to counting one’s chickens before they hatched. As Bradley explains, “[s]uch an [accounting] changeover would require extra diligence and integrity given its judgmental, even subjective, nature—and its premium on the present at the expense of the future. Strong bourgeois virtue was needed where the accounting rules allowed discretion” (p. 364). Bradley shows throughout Enron Ascending that Enron abused this accounting treatment in an attempt to make it appear as if it was making more money than it actually was.

In sum, Enron was not a failure of capitalism as classically defined, but a failure of contra-capitalist management. Bradley strongly suggests that “Enron defined contra-capitalism: political capitalism, political correctness, regulatory gaming, and other crony sports of the mixed economy. In broad terms, Enron was about postmodernist philosophy and unintended consequences that allowed the worst to get to the top” (p. 675).

The rest of this brief review focuses on two themes, both of which I am certain Bradley drills down into in volume four. First, given that there exists or existed a bourgeois ethos why has it been replaced or is in the process of being replaced by something else? Second, what is the role of the state in the economy and what does it imply about the future of capitalism? Enron highlights both of these themes.

Where goeth the bourgeois? That a ruling bourgeois elite existed is not an issue. It did and to some extent it still does. Samuel T. Francis, in Leviathan and its Enemies (Arlington, VA: Washington Square Publishers, 2016, p. 3), makes a convincing case that “in the course of the first half of the 20th century, a ‘new class’ of managers emerged in the economy, government, and culture of the United States and that this new class or elite adopted an ideology and a set of policies that reflected its common interest in acquiring and consolidating national power. The emergence of this new ‘managerial’ elite led to a protracted political and ideological conflict with the old ’bourgeois’ elite that prevailed in the United States between the Civil War and the Depression and this conflict underlay most of the issues on which the ‘Left’ and the ‘Right’ in American politics divided between World War I and the 1980s.”

This suggests that there is no reason to believe that Bradley’s views on bourgeois norms and classical liberalism are any threat to make a comeback any time soon. The decline of the bourgeois leaves little fertile ground for capitalism in the classical liberal sense.

The role of the government in the economy is mighty and pernicious. It is my view that the government intervenes in the economy, for the most part, through the action of administrative agencies (see Michael Anton, “Draining the Swamp,” Claremont Review of Books 19 no.1, Winter 2018/19). The government or the state is an active participant in the economy and will continue to be so. There is no turning back. And the behavior of firms like Enron, or any firm for that matter, will reflect this reality. After all, you cannot blame a dog for eating out of the garbage.

What does this portend for the capitalist economy? It suggests that the economy will continue to be of the mixed variety. In Enron, as Bradley suggests, we do not see capitalism run amok, or a species of market failure but “an unintended consequence of interventionist public policies and a contra-capitalist ethos by respectively, government and executives” (p. ix). After all, the Securities and Exchange Commission (SEC) signed off on mark-to-market accounting. The Federal Energy Regulatory Commission (FERC) yielded regulations directly shaped by Enron and others.

Will government, executives, or the state be held accountable? There is no reason to think so. Conservatives, paleo-conservatives, libertarians, and classical liberals are not going to make a “long march through the institutions.” They are not going to take over the FERC, the SEC, or the Department of Justice. As Sam Francis would say, they are “Beautiful Losers.” The best that can come out of Enron is that capitalism doesn’t take the fall, and Bradley has put forth plenty of evidence that it will.

Despite the likely futility of his effort, Bradley is a very able scholar and I look forward to his fourth volume of this tetralogy. He may be more sanguine about the future than I am.

Edward Tower
Austin, Texas
Banking and FinanceBusiness and EntrepreneurshipEconomy
Subscribe Buy This Issue Get the App