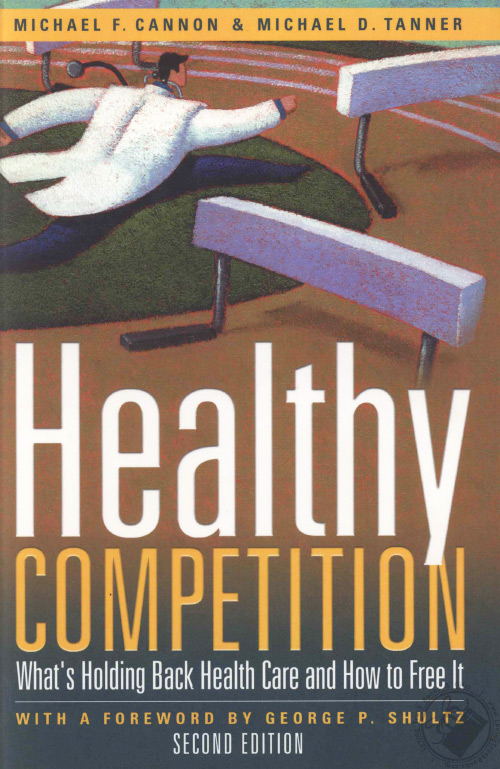 Healthy Competition
What’s Holding Back Health Care and How to Free It
Michael F. Cannon and Michael D. Tanner
Paperback
This book review appeared in the Summer 2006 issue of The Independent Review.

There certainly is no shortage of critics of the health-care system in the United States. Indeed, health-policy experts have reached something approaching a consensus that the U.S. health-care system represents a prime example of the “wrong” way to organize and finance a health-care delivery system. The World Health Organization (The World Health Report 2000: Health Systems: Improving Performance [Geneva: World Health Organization, 2000]) has ranked the U.S. health-care system’ thirty-seventh among the 191 member counties, approximately equal in performance to the health-care systems of Chile, Costa Rica, Cuba, Dominica, and Slovenia, and well behind those of France (ranked first) and Italy (ranked second). The factors that contribute to this mediocre ranking are relatively high levels of overall health spending, less than stellar population health outcomes, and relatively poor access to care among those lacking health insurance.

Despite the consensus that the U.S. system has shortcomings, a clear consensus about the specific health-system reforms required to rectify these shortcomings has not emerged. A common theme among many critics, however, is that reliance on decentralized market forces and competition, relative to health systems in other developed countries, is a primary contributor to the U.S. system’s underperformance. For example, Donald L. Bartlett and James B. Steele (Critical Condition: How Health Care in America Became Big Business—and Bad Medicine [New York: Doubleday, 2004], chap. 6) argue that a government-managed single-payer system would improve access to needed care, while reducing the resources wasted on the promotion of unnecessary care by profit-seeking service providers and the shifting of payment responsibility by profit-seeking insurers. In a similar vein, Steffie Woolhander and colleagues (“Costs of Health Care Administration in the United States and Canada,” New England Journal of Medicine 349, no. 8 [2004]: 768–75) contend that billions of dollars “wasted” on administrative costs across numerous private health-insurance plans might be saved by moving to a Canadian-style single-payer health system. Such critics argue that market competition creates waste in the form of duplication of facilities, diverts resources from patient care to administrative costs and profits, and degrades the quality of medical care.

However, in Healthy Competition, Michael F. Cannon and Michael D. Tanner provide a concise and highly readable summary of the evidence refuting the case against market competition in health care. To some extent, that this effort is required at all is dismaying. Even the most vociferous critics of competition in health care generally acknowledge that market forces can work to improve consumer welfare in markets for many types of products, such as personal computers or household appliances. The critics maintain, however, that these same market forces often harm consumers of health care because health care is “different” (for an excellent discussion of this view, see James C. Robinson, “The End of Asymmetric Information,” Journal of Health Policy, Politics, and Law 26, no. 5 [2001]: 1045–53). Cannon and Tanner, in contrast, provide a valuable service by accumulating the evidence that demonstrates that although health care is not the “same” as personal computers or household appliances, it is not so “different” that market forces cannot work to consumers’ benefit.

Cannon and Tanner begin by summarizing what is “right” and what is “wrong” with the current U.S. health-care system. The oft-noted fact that U.S. population health measures (for example, life expectancy at birth) appear to be less than stellar when compared to other developed nations relates primarily to differences in measurement and population characteristics across countries. These comparisons are therefore not especially meaningful as indicators of health-system performance. Outcomes for specific conditions more directly mutable by health-systems inputs, such as cancer survival rates, are indeed better in the United States than in other countries. As critics also often note, U.S. health spending per capita is much higher than any other country’s. This difference to a degree is to be expected given that the United States also has the highest gross domestic product (GDP) per capita because spending increases with income for “normal” goods, such as health care. Cannon and Tanner identify the rate of growth in health spending, especially in government-financed entitlement programs (Medicare and Medicaid), and the persistence of uneven quality of care as things that are “wrong” with the system.

Although most observers of the U.S. system would agree that these problems exist, there are many different views on the underlying causes and, correspondingly, on the appropriate remedies. Cannon and Tanner discuss common misdiagnoses of the U.S. system’s ills. For example, they cite evidence that the purported savings in administrative costs associated with single-payer systems are illusory and usually are accompanied by offsetting costs in the form of longer waiting times and limited access to specific types of services. The concept of “managed competition” was borne from a perceived need to impose controls on the extent of competition among firms to prevent market failure, but the authors contend that “managed competition” simply builds a layer of government control on top of all of the worst features of the current system” (p. 40). In the authors’ view, mandating that employers provide health insurance to employees also is an infeasible solution’ owing to the policy’s high costs, the offsetting reduction in wage compensation, and the reduced availability of full-time employment among low-wage workers.

The remainder of the book continues the authors’ diagnoses of the U.S. health system’s ills and offers their proposed cures. They suggest that most of the problems are caused or exacerbated by misguided government policy, not by market failure. The consequences of the favorable tax treatment of health-insurance benefits rank among the most significant of the problems identified. Among the persons insured through employers, the favorable tax treatment of health insurance encourages excessive insurance coverage, both in terms of an excessive range of service coverage (insurance coverage for predictable recurring services) and an inadequate amount of cost sharing (low deductibles and coinsurance rates). This excessive insurance coverage shields consumers from the costs of the services they consume and therefore mutes the incentive to weigh carefully the benefits relative to the costs. Similarly, providers of services have less incentive to make price information available to consumers.

Another important problem, the authors contend, is the reliance on central planning and administered pricing mechanisms in the government health programs (Medicare, Medicaid). For example, the Medicare program was modeled after Blue Cross/Blue Shield health plans, circa 1965, when such plans were the dominant form of private insurance. But the early 1970s, competitive forces, fueled in part by the favorable tax treatment of health insurance benefits, led Blue Cross/Blue Shield plans to add coverage for prescription drugs—coverage that is just now being added to the standard Medicare benefit (although, as the authors note, this addition in its current form is not a positive development).

Cannon and Tanner advocate as a solution what generally is termed consumer-driven health care, which in different forms entails giving consumers (and their health-care providers) more direct control over health-care spending. Individuals would be able to contribute money (or have it contributed on their behalf by employers or government) to health savings accounts (HSAs), which can be used to pay for routine care and to purchase a catastrophic health-insurance policy (to cover costs of a major illness). The necessity under this arrangement that in most circumstances consumers pay the full costs for care they purchase provides a strong incentive to consider value carefully, and it simultaneously provides incentives to providers to develop more efficient means to produce desired health results. In other words, this arrangement restores the classic role of “price” to health-care markets.

If Cannon and Tanner can be faulted at all, it is for failure to deal with many of the common criticisms of HSAs. The most common criticism is that health-care consumers do not have the capacity to determine “value” and often make choices that health-care professionals consider ill-advised or irrational (see Thomas H. Lee and Kinga Zapert, “Do High-Deductible Health Plans Threaten Quality of Care?” New England Journal of Medicine 353, no. 12 [2005]: 1202-4). Physicians in their role as agents for patients can help patients assess value, but traditionally they have not done so, in part because they, too, lack value information, but mainly because they rarely have any reason to do so. Presumably this situation would change if consumer-driven health care became the norm because health-care providers who enabled patients to make more informed value choices would command a premium in the market, but transition costs might be substantial. There are also “hybrid” consumer-driven plans with deductibles and copayments reduced or waived for especially effective preventative care, though such plans quickly become complex and thus difficult to understand and burdensome to administer. Implicit in the Cannon and Tanner’s discussion is that none of these limitations obviates the attractive features of HSAs relative to many other feasible health-policy reforms.