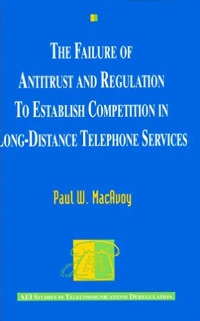 The Failure of Antitrust and Regulation to Establish Competition in Long-Distance Telephone Services
Paul W. MacAvoy
Hardcover
This book review appeared in the Summer 1997 issue of The Independent Review.

AT&T’s absolute monopoly of the supply of switched long-distance telephone services ended in 1976 with the rollout of MCI’s outlaw Execunet offering. Twenty years later, economists are questioning whether AT&T remains able to influence the prices at which long-distance services are sold and, if so, to what extent AT&T exercises this market power. The first scholarly studies in this area relied largely on theory and deduction, and their results were ambiguous. Empirical studies followed, but the issue has remained unresolved.

Paul MacAvoy, a distinguished economist at the Yale School of Management and coeditor of the voluminous AEI Studies in Telecommunications Deregulation series, weighs in with a comprehensive quantitative study purporting to show not only that AT&T retains considerable market power but also that the long-distance industry performs as a tacitly collusive, three-firm oligopoly with AT&T leading itself, MCI, and Sprint to supercompetitive profits. MacAvoy’s analysis shows that industry concentration and market shares stabilized around 1990 and that pricing and profit margins have converged and risen in lock step. The gravamen of MacAvoy’s thesis is that long-distance markets never have performed competitively and, due to the persistence of regulatory and antitrust constraints, have moved systematically away from competitive performance.

MacAvoy’s conclusions call into question the efficacy and direction of national telecommunications policy. If twenty years of regulatory and antitrust policy have failed to produce robust competition, then that policy has been a dismal and costly failure. His conclusions warrant attention, especially because policymakers have launched an even more adventuresome and potentially costly plan to transform the local telephone service monopoly into a competitive industry.

The book’s title understates the thrust of its argument: it is not that the government tried and failed to create a competitive market but, rather, that the government didn’t try at all. MacAvoy documents how federal regulatory and antitrust policies have been used to hamstring AT&T and to nurture its rivals, all to the detriment of competition. He suggests two possible explanations for these policies: regulators enjoy micromanaging the industry and have been reluctant to stop; and, more ominously, regulators may believe that unfettered competition is unsustainable.

MacAvoy argues that the country has been misled into believing that the long-distance industry is competitive. Factors contributing to this misapprehension include a large but inconsequential competitive fringe, ubiquitous advertising without substantial price competition, periodic price reductions that are attributable to regulatory fiat rather than to competitive pressure, frequent price structure changes without price level reductions, and telephone subscribers shifting custom among rival long-distance carriers in pursuit of elusive savings. Moreover, MacAvoy argues that the country has been misled by naïve, uninformed, self-congratulatory, and perhaps intentionally confusing proclamations by regulators, legislators, trustbusters, and sundry industry experts.

The regulatory history that MacAvoy meticulously documents covers well-traveled ground. The Federal Communications Commission nurtured AT&T’s competitors while constraining AT&T’s ability and incentive to compete aggressively on the basis of price. Price floors have shielded AT&T’s rivals and preserved cherished pricing inefficiencies and cross-subsidies. AT&T files tariffs that other carriers quickly match to within a tenth of a cent, a regulatory game that facilitates tacit collusion by enabling firms to signal cooperation and to monitor conduct.

MacAvoy also criticizes the antitrust settlement that divested AT&T of its local telephone companies in 1984 and ostensibly placed AT&T on a level playing field with other long-distance carriers. He shows how federal antitrust (competition) policy went to war with national regulatory (cross-subsidization) policy during the 1970s and 1980s, when the Justice Department sought to unwind the monopolized industry structure that had arisen through state and federal regulatory action. He illuminates the confused state of these policies by highlighting incongruities in the government’s economic theories of market power, leverage, bottlenecks, and predatory pricing. The AT&T antitrust settlement was presumed to harbinger a withering away of regulation, but MacAvoy shows that no withering occurred. Status-quo regulation continued, with the antitrust court adding its own notions of economic and social efficiency to the policy mix. The most damaging antitrust policy of all, in MacAvoy’s view, was the court’s decision to ban the divested Bell telephone companies from entering interLATA long-distance markets, a move that further limited the potential for robust competition. (Editor’s note: LATA refers to local access and transport area. The United States in divided into some 160 such areas.) The Telecommunications Act of 1996 provides belatedly for market entry by the Bell companies, but MacAvoy argues that its provisions are so riddled with strategic opportunities for protracted litigation that new competition is unlikely to emerge in a timely fashion.

The upshot of these policies is that AT&T, MCI, and Sprint presently supply 90 percent of all intraLATA long-distance service, with the remainder being supplied by a competitive fringe of about 500 firms. Carriers seemingly rest content with supercompetitive profit margins and rock-stable market shares, a comfortable alternative to the price wars that followed deregulation in the airline and trucking industries.

The centerpiece of MacAvoy’s work is an empirical analysis of industry concentration and profit margins across long-distance services and regulatory jurisdictions. Experience in other industries suggests that concentration in the long-distance industry should have fallen toward atomistic levels over time as new entrants gained business and as market shares gravitated toward equality. Economic theory predicts, in turn, that profit margins will fall in parallel with the decline in industry concentration. In graph after graph, however, MacAvoy shows that long-distance service sectors remain concentrated, with market shares in each sector holding stable at roughly 60 percent (AT&T), 20 percent (MCI), 10 percent (Sprint), and 10 percent (all others). MacAvoy shows that profit margins increased as industry concentration initially decreased—a divergence contrary to theoretical expectations—and continued increasing as concentration stabilized. He shows that profit margins have converged near 70 percent (i.e., estimated marginal cost equals thirty cents of the average revenue dollar), and compares these values to margins of 35 percent in other highly concentrated industries. And he reveals the unexpected absence of price shading among high-volume customers who ordinarily would whipsaw competing carriers into making price concessions. He supplements this graphical analysis with structural econometric models that put a fine point on his study of price leadership and tacit collusion.

Critics of MacAvoy’s analysis may be tempted to regard his empirical results as self-condemning: it is difficult to accept that U.S. long- distance service is, by far and away, the nation’s least competitive industry. Although MacAvoy’s results may trigger initial skepticism regarding methodology, data, and assumptions, his sensitivity analyses show the results to be robust.

The uniqueness of the long-distance business may help to explain some of MacAvoy’s most challenging results. Industry demand is known to be fairly price inelastic because there are no close substitutes for long-distance services at prevailing prices (industry elasticity values as low as –0.5 are commonly estimated). Consequently, the long-distance industry could profit more handsomely than most industries by tacitly colluding to raise prices, and so the finding that network profit margins exceed margins in other concentrated industries is not implausible. However, as MacAvoy observes in passing, network marginal costs have fallen vanishingly close to zero in recent years as total costs have become increasingly fixed with respect to usage. This fact not only may help to explain the rising profit margins that MacAvoy observes but also may limit the usefulness of margin comparisons with other industries.

To regard MacAvoy’s work as definitive would be premature at this juncture. At least one contemporary empirical study supports precisely opposite conclusions regarding AT&T’s market power (Simran Kahai, David Kaserman, and John Mayo, “Is the ‘Dominant Firm’ Dominant? An Empirical Analysis of AT&T’s Market Power,” Journal of Law and Economics 39 [October 1996]: 499–517). That contradictory study finds long-distance markets to be intensely competitive and shows AT&T to lack market power. The findings imply relatively low profit margins and so contrast starkly with MacAvoy’s results. That these two credible studies reach opposite conclusions—other scholarly studies appear to be split about evenly on the issue as well—suggests unresolved problems of methodology, data, assumptions, and interpretation.

MacAvoy’s work surely will serve to pique interest and heighten controversy, and deservedly so. Economists will sharpen their pencils, and policymakers will continue to regard all empirical work in this area with selective caution.

James A. Montanye
Falls Church, Virginia
Antitrust, Competition, and MonopolyBusiness and EntrepreneurshipEconomyRegulationTelecom and Internet Policy
Subscribe Buy This Issue Get the App