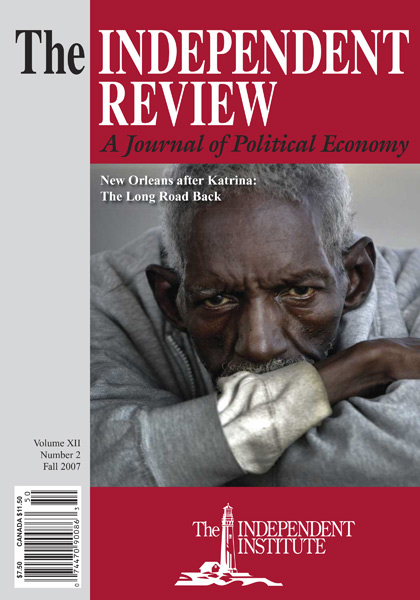 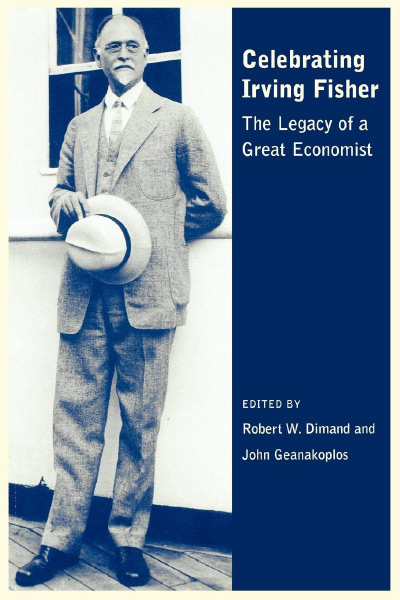 Few American economists have the reputation Irving Fisher has—he is probably second only to Henry George as an economist of whom the American public was aware in the early twentieth century—and no other economist has undergone such dramatic reversals of fortune over time to achieve his reputation. Fisher’s ideas and life seem, in some ways, stranger than fiction.

Celebrating Irving Fisher comprises, for the most part, the papers and comments originally delivered at a Yale University conference in May 1998. It contains two purely biographical essays: a reprint of James Tobin’s essay on Fisher from the 1987 Palgrave Dictionary of Economics and a paper by William J. Barber from the Yale conference. Both make fascinating reading. Tobin stresses Fisher’s mathematical bent, calling him “America’s first mathematical economist” (p. 19). In this judgment, Tobin is no doubt correct. Fisher’s methods put him constantly at odds with the rest of Yale’s economics department throughout the first three decades of the twentieth century. “Much of standard neoclassical theory today,” Tobin continues, “is Fisherian in origin, style, spirit and substance” (pp. 19–20). Fisher’s colleagues in the late nineteenth and early twentieth centuries had been trained in Germany and had brought back to America the tools and attitudes of the German historical school. The most important American economists of the day formed the American Economic Association to further German-style theory and policy. Fisher was never a part of this movement because, among other reasons, he had traveled to England and Austria, meeting and absorbing ideas from such thinkers as Carl Menger, an ardent opponent of the German historical school, and Eugen von Bohm-Bawerk. He also met Vilfredo Pareto and Leon Walras in Lausanne and Francis Y. Edgeworth in Oxford (p. 47). Their influence on him is evident from his time-based interest theory to his use of general-equilibrium modeling and mathematical theoretical expression.

Fisher was always more than a theorist. Like other public intellectuals, such as the late Milton Friedman, he often engaged in supporting public-policy positions. Unlike Friedman’s policy advocacy, however, Fisher’s concerns—which ranged from good eating habits and life extension to public health, eugenics, and Franklin Roosevelt’s monetary and gold policies—often interfered with his ability to perform his teaching duties. He was away from Yale more than he was there. Toward the end, he did little teaching. Fisher’s driving passion to engage in public political debate, to run businesses on the side—he invented a card index system and sold it the company that became Remington-Rand, and he published a weekly index-number newsletter that at its peak reached 7 million readers (p. 51)—and to raise Yale’s profile even as he raised his own rankled many of his Yale colleagues. No doubt some were simply envious of his pre-1929 crash wealth (he was a millionaire), and others were jealous of his celebrity. Many also doubted the wisdom of his positions on issues such as backing 100 percent reserves for banks and setting up a mechanism that he claimed would produce absolute price stability.

Fisher’s personal ideological proclivities were all over the political map and sometimes changed as circumstances did, especially after the Great Depression suggested empirical difficulties with his quantity-theory approach—an approach that Milton Friedman and Anna Schwartz resurrected in 1963 and argued had been true all along. Even though Fisher had studied with William Graham Sumner, he was never an advocate, as his professor had been, of total laissez-faire. As Joseph Dorfman mentions, “he opposed any all-out laissez-faire. He supported such liberal measures as high inheritance taxes and wider dispersal of corporate ownership through profitsharing, employee ownership, and co-operation. As examples of existing types of activities which were neither pure private ownership nor pure government ownership, he cited ‘government regulation; leases to private capitalists with reversionary rights to the city, state, or nation; subsidies; price-fixing; guaranteeing prices, underwriting against loss; taxes on profits or on excess profits’” (The Economic Mind in American Civilization [New York: Augustus M. Kelley, 1969], 5: 298). To this list, one may add Fisher’s sometimes-successful Progressive Era crusades for pure food, abolition of alcohol consumption, human eugenics, government manipulation of the international gold price, and even national health insurance.

At the height of his fame, Fisher did something of which economists should always be wary: he made an economic prediction. Two weeks before Black Friday, in October 1929, he proclaimed that stocks “have reached a permanent high plateau.” Ouch! One has to admire, however, the fact that Fisher, unlike so many of his contemporary colleagues in the quirky discipline of economics, at least put his money where his theory was: he then went completely broke in the market crash. Only Yale’s forgiveness of the rent on Fisher’s New Haven residence, which had been sold to the university, prevented him from declaring personal bankruptcy. His prestige took a huge blow, and he found himself ridiculed, his reputation diminished. Even the economics profession in later years seemed to agree that he had become a fascinating curiosity. At the first Fisher commemorative conference at Yale in 1967, however, another famous economist, Paul Samuelson, made his own prediction: professional economists would ultimately come to recognize Fisher as “this country’s greatest scientific economist” (p. 54). Unlike Fisher’s unfortunate prediction, Samuelson’s has been borne out. Today, most of the citations to Fisher’s work pertain not to the history of economic thought, but to his theoretical work. He is, among other things, the father of the Federal Reserve’s problematic quest for “price stability” and hence of the entire field of contemporary monetary policy.

In a discussion of Benjamin Anderson, Dorfman nicely summarizes why the quest for price stability is problematic: “Anderson, with clear insight, declared that the ‘price problem is not a problem of the great average of prices, taken in bloc, as the quantity theory school . . . supposes. It is a much more intricate problem, which involves relations of prices among themselves’” (The Economic Mind, 323). F. A. Hayek made similar criticisms of price-stabilization policies, noting that important adjustments to changes in relative prices might be distorted by attempts to stabilize the overall average of prices as measured by some artificially constructed index process. Modern central-bank policy typically begins and ends, however, with attempts to do just this, and success is measured by how small the movements are in some overall price index. When the well-used index provides too much evidence of inflation, central bankers and economists sometimes resort instead to other measures, such as the “core” Consumer Price Index. Regardless of index-number switches, however, the general principle remains.

Independent Review readers will find much of interest in Celebrating Irving Fisher, but some of the chapters with a more technical bent will probably be rough sledding for those not well tutored in higher mathematics and advanced statistics. These chapters, though well done, require highly specialized knowledge. Much of the book does not impose such a requirement, however, especially Tobin’s Palgrave essay and his lucid, compact analysis of two of Fisher’s famous books, The Nature of Capital and Income and The Theory of Interest. Other chapters with modern relevance include John B. Shoven and Jon Whalley’s analysis of Fisher’s support for a consumption tax that would replace most other taxes and Victor Fuchs’s interesting analysis of Fisher’s ideas about public health. Fuchs writes that “[w]hile Fisher was quick to appreciate the theoretical points that supported NHI [national health insurance], he apparently never considered the dead-weight loss that might be expected from reducing the marginal cost of health care to zero. Or, if he did consider it, he decided not to confront the issue. In addition to theoretical lapses, Fisher was particularly weak in his attempt to muster empirical (historical) support for NHI” (p. 415).

Fisher’s consumption tax was a radical proposal that has never been adopted anywhere, but that remains a current, highly relevant policy idea. The final epitaph on it, and by extension on the Hall-Rabushka (flat-tax) proposal, might well have been given in Michael Graetz’s comment: “The second problem is political. CBIT [comprehensive business income tax] implies taxation of only wages at the individual level. In this regard, it is like the Hall-Rabushka flat tax. Because of the political power of demonstrating that the tax system is ‘unfair’ by pointing to untaxed individuals with substantial investment income, taxing only wages at the individual level does not seem likely to remain stable over time” (p. 247). Robert E. Hall’s chapter points out that another of Fisher’s radical ideas, the fully compensated purchasing unit, has been implemented successfully in Chile.

Had Nobel awards in economics existed during Fisher’s lifetime (he died in 1947, and the first Nobel Prize in Economics was awarded in 1969), there is little doubt he would have been a recipient. His wide-ranging theoretical ideas have influenced modern neoclassical theory probably more than any other individual’s ideas, and many remain relevant for policy decisions today. Most conference proceedings are mixed bags, at best, but Celebrating Irving Fisher is a happy exception: the level of analysis is high and the discussions always on point. Any reader interested in the life and ideas of one of the nation’s foremost economists will find much of value in the book. Whether your interest is the history of ideas or Fisher’s analytical contributions, Celebrating Irving Fisher is a wonderful place to begin to understand why Fisher continues to be widely regarded as a pioneering economic theorist.