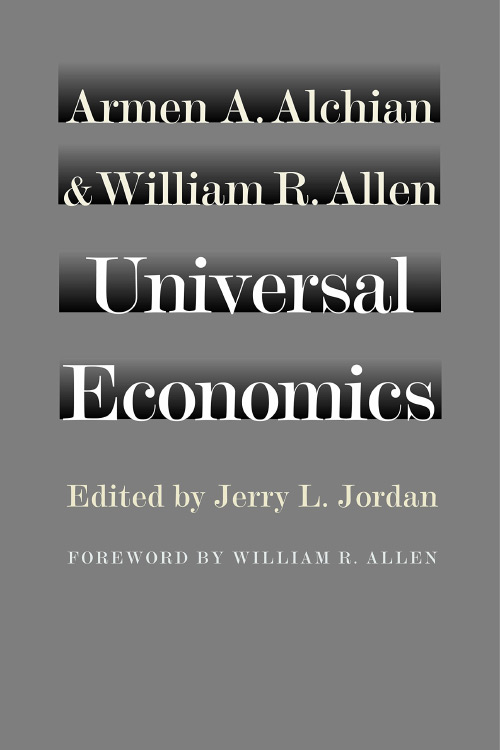 Universal Economics is a successor to the authors’ highly regarded economics textbook Exchange and Production: Competition, Coordination, and Control (1969; reprint, Belmont, Calif.: Wadsworth, 1983). It is published under the editorship of Jerry Jordan, former president of the Cleveland Fed, because the work on the book was interrupted with the passing of one of the authors, Armen Alchian, in 2013 at the age of ninetyeight.

The coverage of Universal Economics is wide ranging. It has forty-two chapters divided into four parts: part 1, “Demand, Exchange, and Property Rights”; part 2, “Specialization, Production, Teams, and Firms”; part 3, “Wealth, Rates of Return, and Risk”; and part 4, “Employment and Inflation.” A typical modern microeconomics textbook relegates the topics of part 3 to finance, and the topics of part 4 to macroeconomics, limiting itself to a subset of the topics covered in parts 1 and 2. Such a typical microeconomics textbook leaves out some of the topics that are central to Universal Economics—for example, the role of property rights in enabling exchanges, what difference alternative institutional arrangements make, and market solutions to the problem of shirking and dependencies—relegating them to industrial organization or new institutional economics.

One of the most attractive features of Universal Economics is its step-by-step exposition of economic principles, illustrated with examples in life and, where needed, with simple numerical examples that are fully worked out to delineate implications. For example, “The Saga of Codelandia” (chapter twenty-two) uses the example of a simple production schedule to illustrate some of the most important concepts in economics— individual production versus teamproduction; implications of innovation/discovery under different institutional arrangements (economic democracy versus private property, nationalization of private business, government control of enterprises); profit as a reflection of business contribution to social output; profit versus quasi-rent; the question of management competency in explaining the difference between the expected return from the purchase of a business and actual return; the problem of opportunistic behavior on dependencies arising from firm-specific investment; and the necessary association between innovation/discovery and increase in inequality on the one hand and economic development on the other. This is just one of many economic stories that Universal Economics tells to make economics sing.

In addition, lessons in each chapter are reinforced by a dozen or so end-of-chapter “questions and meditations” (with suggested answers) for the student-reader to test his or her comprehension of the chapter’s lessons. I believe that if readers patiently work through the book (and perhaps reread it carefully), they can truly learn sound basic economics and gain a sense of how they may use economic principles in everyday life. That would be true not only for those who are studying economics for the first time but also for many who call themselves economists. Universal Economics is a worthy successor to Exchange and Production.

Universal Economics has retained the useful distinctions first introduced in Exchange and Production—for example, price takers and price searchers. The term market clearing in place of market equilibrium is also retained. The book also introduces more new terms. One example is personal worth in place of personal use value (used in Exchange and Production) for the more typical term utility. So, in Universal Economics one reads about “total personal worth” or “marginal personal worth” instead of “total utility” or “marginal utility.” The most significant new term introduced in Universal Economics is dependency. Early in the book, the authors introduce the concept of dependence (meaning “reliability”) as an important consideration in exchanges within the context of extensive social division of labor (pp. 56–57). They elaborate the relevance of the concept of dependence in subsequent chapters: “Protecting Your Dependencies” (chapter 24) and “Dependency Assurance by Reputation and Predictable Price” (chapter 25).

Universal Economics provides two useful chapters on the time value of money, illustrating the concept with many examples. I see that the interest-rate tables, such as “Compound Future Value of Present $1” (chapter thirty), “Present Value of $1 Received at the End of Each Year” (chapter thirty-one), and “Uniform Annual Payments at End of Each Year to Retire $1 of Debt” (chapter thirty-one), are carried over from Exchange and Production and fromthe authors’ even earlier book University Economics (Belmont,Calif.: Wadsworth, 1964). No one pores over interest-rate tables anymore, though. Students can easily use MS Excel or LiberOffice Calc to do the calculations.

Use of new (and somewhat idiosyncratic) terms is not in itself a problem for learning economics from Universal Economics. All the terms used in the book are carefully defined, their use amply illustrated, and their meaning consistently maintained. A person trying to learn economics for the first time, therefore, may in fact be delighted by the simplicity of the jargon-free expositions of Universal Economics. However, the new terminology may require some translation for those who have had prior exposure to economics through other economics textbooks. For example, in observing that the term market failures is a misnomer for phenomena arising from an absence of property rights, Universal Economics suggests the possibility of rendering these types of situations nonproblematic through private exchanges among property owners, if transaction costs are not prohibitive. But this is done without any reference to the widely used Coase Theorem. The omission is not necessarily a bad thing if one’s main goal is not so much to pick up economic lingo as to learn sound and useful economics. Overall, I regard Universal Economics as one of the best, if not the best, economics textbooks from which one can learn sound and useful economics.

Moreover, this more than seven-hundred-page, well-made book is available in paperback at a bargain price of $14.50 (a typical principles-of-microeconomics textbook currently sells for around $250). Exhibiting high quality for a low price, Universal Economics is a value proposition difficult to beat.

When I began to teach economics in the mid-1980s, I adopted by chance Exchange and Production, 3rd edition, for my principles-of-economics class. I must confess that after consuming the limited economic diet of Hal Varian’s Microeconomics Analysis (New York: Norton, 1979) in graduate school, I was glad I could finally appease my hunger with Exchange and Production. I believe that I benefitted much more than my students from teaching out of it. But soon Exchange and Production went out of print.

Since then, I have experimented with dozens of popular economics textbooks. A few are not so bad, but none of them compares to Exchange and Production in featuring the centrality of property rights in exchange or the necessity of interest rates in profit calculation or the complexity that team production introduces in firms.

All of the economics textbooks I have seen since reflect the publisher’s effort to adopt the winning formula in the marketplace—colorful graphs and diagrams, formulaic lessons for memorization and spoon-feeding, and the resources to make teaching less burdensome for the instructor, such as the computerized test bank, Power Point slides, online study guides, and online self-grading assignments and quizzes. To show that they are up to date, they also feature a description of the latest developments in economics, such as experimental games and behavioral economics. One exception I can think of is Paul Heyne’s The Economic Way of Thinking, 2nd edition (New York: McGraw-Hill, 1977), inspired by University Economics.

The dominance and proliferation of economic textbooks adhering to the winning formula are proof of what really works in the market for economics textbook, where the consumer is not the student, but the instructor. Instructors decide which textbook they want to use in class. The price of a textbook doesn’t matter much because the students (or their parents) pay, not the instructors. The content of the majority of microeconomic textbooks is similar. The margin on which the instructor’s adoption decision rests is convenience in teaching. Publishers supply all sorts of teaching supplements to make teaching easier. These are the necessary conditions for commercial success (i.e., adoption in the classroom) in the economics textbook market.

Therefore, I predict that Universal Economics will develop a group of loyal followers, as did Exchange and Production and University Economics, but it is not likely to have the kind of market success that N. Gregory Mankiw’s Principles of Microeconomics (Boston: Cengage, 2017) has had, for example. The authors of Universal Economics most likely well understand the incentives in the market for economic textbooks. The publisher, Liberty Fund, interested not so much in the book’s commercial success as in making an excellent book available for a future generation of genuine students of economics at a good price, may not at all regard the outcome a failure.