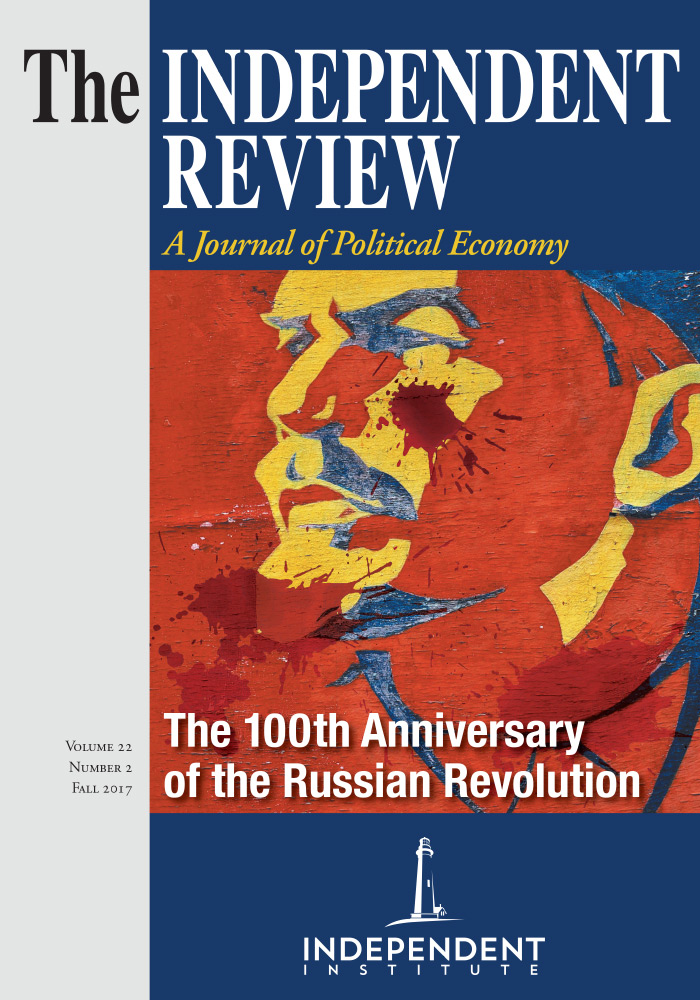 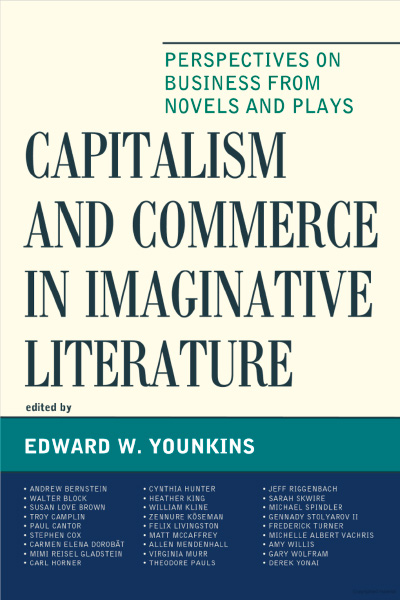 Capitalism and Commerce in Imaginative Literature
Perspectives on Business from Novels and Plays
Edited by Edward Younkins
Kindle Hardcover
This book review appeared in the Fall 2017 issue of The Independent Review.

Capitalism and Commerce in Imaginative Literature is a collection of twenty-eight essays. Each examines an individual work of literature, an author, or a set of works from an economic or business perspective. Nine of the essays are penned by economics or business professors, twelve by other academics (mainly from the humanities), and seven by other professional intellectuals. The essays are presented in the approximate chronological order of the writings examined. They range from an essay on the work of the ancient Greek playwright Aristophanes (487–386 B.C.) to one on American novelist F. Scott Fitzgerald’s The Great Gatsby (1925) to one on contemporary African American playwright August Wilson’s drama Radio Golf (2007). All the authors examined are European or American, and four of the essays focus on works by Ayn Rand.

Several years ago at a cocktail party at my home, an English professor approached a young assistant economics professor, Alex Tabarrok, and asked him if he or anyone else in the Ball State Economics Department taught Marxist economics. With little hesitation, Alex replied: “No, we let you folks in the English Department do that.” A refreshing component of Capitalism and Commerce is that although Marx is not entirely absent from the discussions, most of the essayists use a neoclassical, new institutional, public-choice, or Austrian economic lens to frame their criticism. Yet the essays are generally free from dogmatism or overt politicization. Classical liberal scholars—both economists and noneconomists—will certainly enjoy reading these interesting and informative essays. It is fascinating to see how such a diverse body of literature can bring principles of economics and human liberty to life. Although the reader will understandably be attracted to essays on works of literature with which he or she is familiar, the essays do not generally require detailed knowledge of the work examined. I found my “must read” list expanded!

So why should scholars in the classical liberal tradition and especially economists of such bent be interested in critical essays about imaginative literature? Granted, most economists, like most university graduates, have had some exposure to Shakespeare, Steinbeck, and the like. Many economists presumably read classical and modern literature for relaxation and pleasure. So surely, one might argue, Capitalism and Commerce is a charmingly quaint collection of esoterica, and its blending of economic and literary scholarship is of very limited interest to the economics profession. Many, including this reviewer, would beg to disagree with such an assessment, however. Serious consideration of imaginative literature may be of great use to many of us in the dismal science.

First, plenty of economists teach at colleges and universities. Strategic use of imaginative literature in the economics classroom can be an effective pedagogical tool. As the late and much-missed Michael Watts argues in his pathbreaking work The Literary Book of Economics (Wilmington, Del.: ISI Books, 2003), “[L]iterary passages are a wonderfully effective teaching tool because they are well written and memorable and because they introduce variety in the economic[s] classroom, compared to the typical steady diet of textbook prose, graphs, tables of numbers and math” (p. xxii). This approach can be especially useful in introductory economics classes, where most students are not economics majors. Economics teachers at the principles level are often and justifiably critiqued for emphasizing techniques over ideas. Literature is a way of giving economic ideas a context that is more motivating, understandable, and relevant for many students.

Over the past eight decades, a number of economists have examined how economic principles play out in literature. An extensive bibliography of these efforts as well as an overview of how economics teachers use literature in the classroom are provided in Cecil Bohanon and Michelle Vachris’s essay “Economics and Literature: The Gains from Trade” (in International Handbook of Teaching and Learning Economics, ed. Gail Hoyt and KimMarie McGoldrick [Northampton, Mass.: Edward Elgar, 2012], pp. 223–33). Watts’s Literary Book of Economics gives the interested economics teacher a number of literary passages that can be used to illustrate economic concepts. Paul Cantor and Stephen Cox’s Literature and the Economics of Liberty (Auburn, Ala.: Ludwig von Mises Institute, 2009) is an excellent collection of essays in the same vein. And Edward Younkins’s collected volume Capitalism and Commerce is a significant and welcome addition to a growing body of resources available to assist economics teachers at all levels interested in incorporating imaginative literature in their courses.

There is, however, a second reason economists might want to take an interest in the overlap of literature and economic theory: to improve the quality of economic theory. Tyler Cowen has argued that economic modelling and novel writing are similar intellectual enterprises (“Is a Novel a Model?” in The Street Porter and the Philosopher: Conversations on Analytical Egalitarianism, ed. Sandra J. Peart and David M. Levy [Ann Arbor: University of Michigan, 2008], pp. 319–37). Economic models make certain assumptions about human motivation and social interaction.

Consider the standard Samuelsonian model of the utility-maximizing individual. Although this model is uniformly recognized as useful in many settings, economists from a variety of perspectives are critical of its predictive power. Nobel Prize–winning experimental economist Vernon Smith points out that laboratory experiments suggest that real people behave in ways very different from the Max U person central to intermediate microeconomics. (See, for example, Vernon Smith, “Adam Smith for the 21st Century: Conduct, Rules, the Emergence of Property. Predicting Action in Trust Games,” paper presented at the Economic Science Association World Meeting, July 10, 2016, Jerusalem.) Consider a simple one-time anonymous ultimatum game where a proposer is tasked with dividing a $100 prize between himself and a responder. The responder can only accept or reject the proposer’s offer. Max U players would uniformly generate a split of $99 for the proposer and $1 for the responder. This split maximizes the proposer’s utility, and because $1 is better than nothing to the Max U player, the responder will always accept the split. But this is profoundly not the behavior observed by experimental economists.

Economists who appreciate the limits of the standard Samuelsonian Max U model of human behavior may find imaginative literature is a good place to look for alternatives to Max U. McCloskey is also quite critical of Max U; indeed, she is credited with the moniker “Max U.” She argues that ethics, morals, and passions play a crucial role in human behavior and suggests quite explicitly that literature is a good place to look for alternative modes of thinking. In Bourgeois Virtues (Chicago: University of Chicago Press, 2006), McCloskey counsels the economist who “advocate[s]” the “simplest version” of utility maximization and who “is not a total dope” to “[r]ead a few novels. Talk to your spouse. Go to temple” (p. 344, emphasis added).

Resonating with McCloskey, Derek Yonai’s essay “The Rime of the Neoclassical Economist” in Capitalism and Commerce offers a third reason an economist might want to pay attention to literature: she might pick up some tips on how to persuade the public of the wisdom of her economic insights. He states: “Max U is a robot. . .. Neoclassical economists lack rhetorical oomph because they fail to address or examine human beings. As such their arguments[,] valid though they may be, will fail to resonate with the non-robotic, namely other human beings. Sometimes being right doesn’t matter if no one is convinced” (p. 114).

So teachers, theorists, and persuaders in economics would do well to expand their exposure to imaginative literature as well as their appreciation and use of plays, novels, and poems in their own efforts. If you are so convinced and interested, Capitalism and Commerce is a great place to begin.