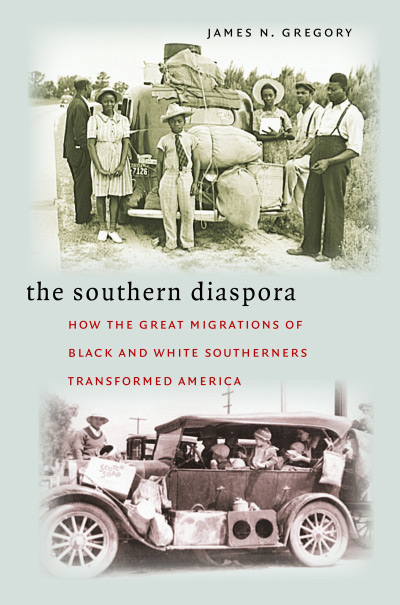 The Southern Diaspora
How the Great Migrations of Black and White Southerners Transformed America
By James N. Gregory
Hardcover Paperback
This book review appeared in the Winter 2006/07 issue of The Independent Review.

Imagine a century-long regional migration involving at least 28 million individuals in a nation whose population rose from 76 million in 1900 to 282 million in 2000. Imagine further that this migration proceeded from an area whose social foundations differed markedly from those at the migrants’ destination. Such an event would be expected not only to disturb the everyday patterns of life, but perhaps even to transform them. In The Southern Diaspora, James N. Gregory carefully documents the people’s movements from the southern to the northern United States, their adjustments to a new environment, and how these phenomena reconstructed the country’s social and political landscape. Pulling all this material together in a single volume is a tall order, but one that the author completes artfully while contributing new insight into familiar events.

Unlike Nicholas Lemann’s The Promised Land: The Black Migration and How It Changed America (New York: Knopf, 1992), Gregory’s study juxtaposes the dual migrations of whites and blacks, as if he were detailing the separation of two isolated forces before they come together in the act of lifting American society from its moorings. His introductory chapters lay out the key theories and data that define the great migration. Gregory then denudes our historical understandings by practically removing the standard emphasis on racial tensions. He focuses instead on specific episodes of accomplishment, cohesion, and discomfort for both whites and blacks as they resettle in the North or return home. Central to his account are cultural achievements in music, literature, radio, and community life that in most other accounts are seen almost exclusively through the prism of race. In Gregory’s approach, the history of these peoples is first made alien before it is subsequently reworked into a larger political narrative whose outcomes we already know.

Although Gregory acknowledges the difficulties of dislocation, he refuses to see the migration saga in terms of maladjustment or failure. Whereas others might see the movement north in terms of unfulfilled promise, he focuses on achievements. African Americans clearly encountered damaging economic discrimination, but it did not prevent them from exploiting the advantages of relocation. This story complements the findings celebrated by James P. Smith and Finis R. Welch (“Black Economic Progress after Myrdal,” Journal of Economic Literature 27, no. 2 [June 1989]: 519–64), which show that income differentials between black workers and white workers narrowed substantially between 1940 and 1980. Although Gregory agrees with Smith and Welch that migration played the major role in this convergence, his conclusion differs with their finding that rising black educational attainment was the other significant factor in black progress. Gregory argues that discrimination often eliminated the economic payoff to educational investments by African Americans. These accounts, however, find common ground in their understanding of African Americans as actors rather than as victims, in contrast to standard narratives such as Lemann’s Promised Land.

Detailing the accomplishments of African American migrants enables us to make new sense of the great civil rights movements as well as of conservative reactions to it. As in Lizabeth Cohen’s seminal Making of the New Deal: Industrial Workers in Chicago, 1919–1939(New York: Cambridge University Press, 1992), we see in Gregory’s work first how cultures congeal before we shift our gaze to the more familiar terrain of politics. In Cohen’s study, we see how different immigrant groups’ ability to rally cohesively behind a political movement was facilitated by a series of rapid social changes, such as the decline of ethnic programming in radio broadcasting and the displacement of locally owned stores by large retail outlets that undermined local patterns of ownership and informal credit relations. Such shifts served as precursors of a transethnic solidarity with regard to New Deal politics. Similarly, in discussing black and white migrants, Gregory examines how individual successes contributed to the networks that defined their culture and action.

African Americans’ accomplishments sustained community purpose by enabling the poor to leverage the resources their more successful fellow citizens created. For example, we see how C. L. Franklin, who was Aretha Franklin’s father, successfully ministered to the larger African American community as a radio preacher, while drawing from and contributing to the civil rights movement and the black gospel and jazz communities. We see also how discrimination—particularly in housing—had the curious benefit of securing bonds between the many successful leaders in business, arts, academia, labor, and religion and the individuals whose life fortunes were meager or more fragile.

By contrast, the advantages experienced by southern white migrants tended to diminish community bonds. Although Gregory documents how they, too, produced their own set of intellectual and cultural leaders, these individuals, having more opportunities for assimilation, typically interacted with people of lower classes via greater physical space and social differences. As white southerners moved North, race was simply not the same dominating feature of life for them that it was for blacks.

Gregory takes great pains to document that many southerners who moved north assumed roles as progressive leaders, reflecting the attitudes of a substantial minority who appeared to want to leave behind a stifling southern culture. Nevertheless, stereotypes produced something of a hillbilly or “tobacco road” image that stuck with and was sometimes embraced by southerners who had gone north. Country music and evangelical Protestantism fused into a definable expression of southern white culture. Even in these areas, however, a relative absence of discrimination imposed costs on the formation of community bonds. Gregory argues that the commercial success of country music weeded out much of the authenticity expected from artists who lived among a community, as opposed to those severed from that community by their own success. Similarly, when whites sought to rekindle their Christianity in the north, they found it more difficult than blacks did to reconstruct their prior denominational affiliations. Churches thus provided less social glue for southern whites gone north.

Gregory is scrupulous in observing that although southern whites formed a disproportionate element of the leadership of conservative or reactionary movements in the North, support for George Wallace or the KKK came predominantly from the indigenous inhabitants. Northern racial politics were supercharged as southern black migration increased pressures on white privileges in housing, schooling, and jobs. Northern racism was not imported from the South.

Curiously, this point strains Gregory’s overarching thesis of transformation. Gregory issues his challenge to the theories that underpin migration studies by urging us to integrate racially migration’s effects and not merely its causes. Rejecting the familiar, he succeeds in showing us how whites and blacks reconstructed their social environments and how these changes in turn altered American culture. Yet because his work culminates in a consideration of political struggles over race, it reminds us of the continuity with the period before mass migration and suggests that urbanization and industrialization exerted their own influences. Gregory’s data also make clear that the most dramatic increase in northward migration occurred after the 1920s, when the nation clamped down on the foreign in-migration that had previously filled its factories. In this account, however, there is little to suggest how the two flows interacted. If southerners were drawn north to fill spots left empty by reduced immigration, the dynamic of northern industrialization is the canvas on which southern migration supplies the color.

Here, however, we may be entering the realm of semantics. At what point do the colors employed in an artistry begin to transform it? The Southern Diaspora is an intelligent work that pushes intellectual boundaries. As such, it substantially enriches our understanding of migration by making the migrants’ contribution to U.S. history more visible. Gregory’s prose is accessible, clear, yet always scholarly. He raises the bar for future researchers by synthesizing the literatures of several disciplines in ways that challenge their prevailing assumptions. Sophisticated readers and scholars with interests in migration, race, and American politics will want to immerse themselves in this book.

Daniel Jacoby
University of Washington, Bothell
American HistoryEconomic History and DevelopmentEconomyLaw and Liberty
Subscribe Buy This Issue Get the App