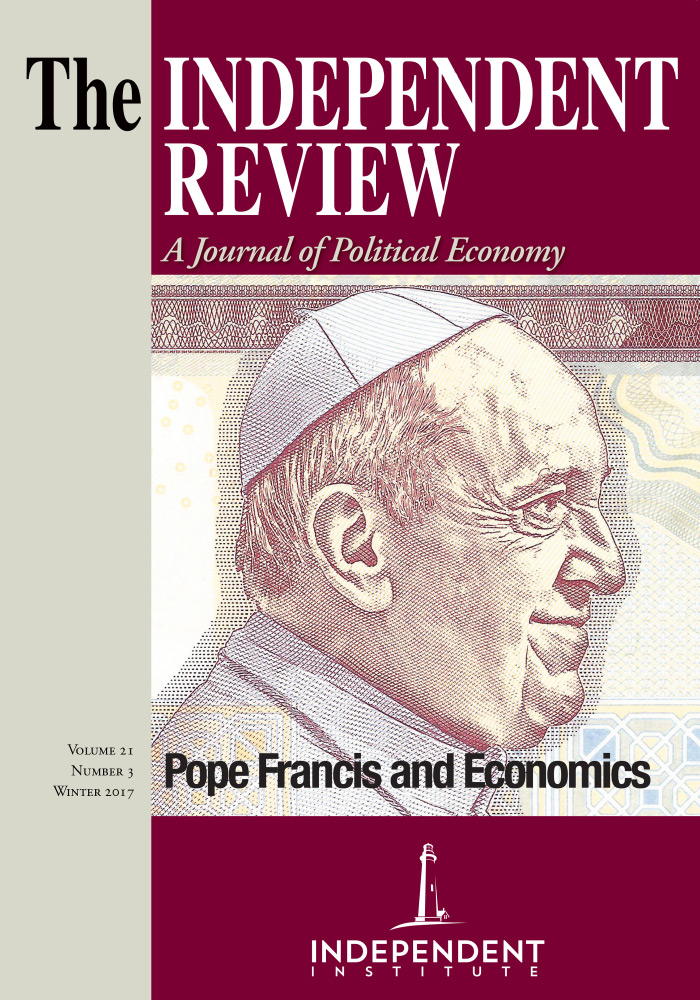 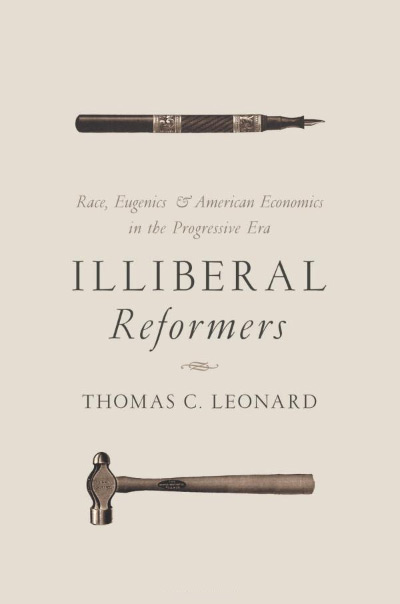 Illiberal Reformers
Race, Eugenics and American Economics in the Progressive Era
By Thomas C. Leonard
Kindle Hardcover Paperback
This book review is a web exclusive for the Winter 2016/17 issue of The Independent Review.

The standard view of American history goes something like this: in the late nineteenth century, the transition to modern industrial capitalism brought its share of benefits, but also an enormous amount of problems. These included extremely large monopolistic companies that harmed the consumer, punitive deflation that hurt farmers and debtors, periodic business cycles with prolonged periods of unemployment, rampant income inequality, and poor working conditions. By the beginning of the twentieth century, the public had enough, and a group of beneficent and noble social reformers rose to the challenge, fought tooth and nail against the vested interests, and instituted with the best of intentions a whole host of progressive reforms including increased democratization, an income tax, minimum wages, and safety regulations to help lift the common poor up from the social malaise around them. The progressives arrived, and so the modern Progressive Era was born.

There are many flaws with this conventional narrative, starting with the belief that unfettered capitalism brought a host of social ills it could not correct. However, the social reformers and their supposedly good intentions can also be scrutinized, for they were less noble than commonly believed. Enter Illiberal Reformers: Race, Eugenics, and American Economics in the Progressive Era, written by Thomas C. Leonard, a research scholar at Princeton University. In this very important book Leonard delves into the philosophy and motivations of the progressive reformers, such as economists, muckrakers, and union leaders, and presents some of their beliefs which may stun their modern day social progressive descendants. Briefly, he describes how many progressive reformers were out to enhance activist government to institutionalize and enhance their own profession, and were often racists who were not looking out for the plight of the impoverished minorities and immigrants but were out to get them, and as a result advocated many seemingly progressive reforms to displace them from the marketplace.

The progressive reformers did not come from a diverse array of social classes and ethnicities, but, as Leonard shows, from a rather homogenous background. Born of New England descent, or Yankee stock, they were post-millenarians who wanted to correct social ills in order to establish a Kingdom of God on earth. Many of them went to Germany to get Ph.D.’s, where they became heavily influenced by the German Historical School who were hostile to the British classicals by being both anti-theory and pro-interventionist. They also became enthusiastic proponents of the German welfare state (and many other aspects of German thinking to which the modern reader seem eerily similar to Nazi thought), and became committed to enacting social change in America. Spearheaded by the thinkers at the University of Wisconsin, which, not coincidently, was a region of heavy German ethnicity, they were determined to overhaul the American government and economy—and put themselves in charge.

Leonard shows that there was a strong element of self-interest which motivated the progressive reformers, particularly the economists, who previously belonged to a generally laissez-faire discipline which unlike many other professions at the time, had not yet used the state to block out competitors and legitimize it. The new economists recognized that a strong activist state required an army of professionalized planners, and also recognized that they were prime candidates for the job. Previously, the laissez-faire conclusions which formed the backbone of economics prevented the emergence of an elitist group of experts with comfortable job security provided by the state. Leonard describes the alliance between economists and the state, who saw their ideal “fourth branch” of government—the new administrative regulatory bodies, as requiring endless planning and monitoring by the nation’s economists. It also required the end of laissez-faire thought. It is worth quoting Leonard on Francis Amasa Walker’s presidential address to the American Economic Association (AEA) in 1888:

The fledgling economists, fingers in the wind, cast their lot with the administrative state, which, together with the American university, was to be the great benefactor of twentieth-century American economics. Francis Amasa Walker’s presidential address to the AEA in 1888 presciently understood that an alliance with the administrative state would allow economics to be in the nation’s service as well as its own....

...Walker made clear: American economics would have to shed any remaining crust of laissez-faire dogma. Laissez-faire, of the sort that had characterized mid-century American political economy into the 1870s, was a nonstarter as a professionalizing strategy. How much scientific expertise, Louis Menand [a modern author] writes, was required “to repeat, in every situation, ‘let the Market decide’”?

...Laissez-faire was inimical to economic expertise and thus an impediment to the vocational imperatives of American economics (pp. 27-29).

The progressives who wanted to be in charge of planning the new order were not egalitarians by any means. On the contrary, they were frank elitists who thought that they knew how to run and take care of the country more than the country itself, and were not afraid of blatantly considering entire groups of people inferior. Leonard describes how the collectivist ideology of the progressives, who viewed society as an organism that needed to be top-down planned and maintained, facilitated racism and the science of eugenics. The individual was subservient to the collective society, whose health was paramount, and like any well-functioning organism, society needed to protect its health by removing parasites—in this case, the inferior races, which included African Americans, Asians, Southern and Eastern Europeans, along with disabled people. On the other hand, the backbone of the organism were the superior Anglo-Saxons, which the progressives, borrowing from their fellow Germans, occasionally referred to as Aryans with ancestry in Teutonic Germany. Of prime concern to the progressives was their theory of race suicide—that newly arriving ethnic immigrants were outbreeding the Anglo-Saxons and diluting the overall racial pool of America (and, to make matters worse, undercutting them in the labor market). For many, eugenics provided a way out. In contrast to the slow, random, and error-prone natural selection, social selection, which was intended, purposive, and right, could select the racial components of the organism and improve its overall health. Eugenics taught that one could quickly and efficiently improve the labor force to enhance societal welfare, and Progressives lost no time in arguing for forced coercive sterilization and euthanasia.

Thus, Richard T. Ely, one of the leading progressives and founders of the AEA, wrote that the preliminary results of eugenics taught us that “we have got far enough to recognize that there are certain human beings who are absolutely unfit, and should be prevented from a continuation of their kind” (p.74). A prominent progressive professor, who wrote a book in 1889 on the governments of the “Aryan races,” argued forcefully that democracy was strongly linked to race, particularly those that hailed from the Teutonic tribes of ancient Germany. This same progressive worried in 1902 about the race suicide implications of allowing Chinese immigrants to enter the country again when the Chinese Exclusion Act of 1882 was up for renewal, and wrote that white workers could not compete with the Chinese since they were unable to “live upon a handful of rice for a pittance,” and the Chinese, “who with their yellow skin and strange debasing habits of life seemed to them hardly fellow men at all but evil spirits, rather” (pp. 127, 133-34). This progressive was none other than Woodrow Wilson, who would become president a decade later.

The race suicide theory also extended to gender, for the inferior women were also out-competing men. They in turn needed to be allocated by the state, to the household, to properly take care of their families and hence the organism’s children. College-educated women, by not staying at home and raising children, were contributing to the race suicide problem, Theodore Roosevelt thundered, since the ethnic minority women were and thus outbreeding them (p. 180). Moreover, by working, they were undercutting the wages of the men. This view that women should stay home was held not just by progressive men but also by many progressive women, such as Florence Kelley. Rheta Childe Dorr, a progressive muckraker who investigated the conditions of women working in industry, wrote that they were “the white Chinamen of the industrial world. She wears a coiled-up queue, and wherever she goes, she cheapens the worth of human labor” (p. 176).

The solution to all of these cheap ethnics and women in the workforce, when immigration restriction was no longer viable, was a litany of minimum wage, maximum hour, and improved working standard legislations designed to artificially raise the cost of employing them, and thereby protect the wages of the Anglo-Saxon male breadwinners. Paul Kellogg, social surveyor, whose work The Survey argued for immigration restriction, wanted a tariff on immigrant labor (in actuality a minimum wage) to keep out inferior workers just like the tariff did with cheaper foreign products. Similar views were held by many prominent economists. To the charges that the unemployed workers would be a burden on society, University of Chicago pastor and sociologist Charles R. Henderson, wrote in the American Economic Association Quarterly (1909)in favor of rural labor colonies or sterilization. While outlandish and reprehensible today, these views were not uncommon among progressives.

Overall, this is a very important book that deserves to be read by every economist and academic, particularly those interested in American history, and especially those interested in the history of economic thought and the economics profession. Many aspects are remarkably similar to the works of Murray Rothbard on the Progressive Era (see, for example, “World War I as Fulfillment: Power and the Intellectuals,” Journal of Libertarian Studies 9 [Winter 1989]: 81-125), and readers interested in Rothbard’s writings on this period will benefit greatly, as the present author has done, from reading Leonard’s book. Leonard shows that many of the progressives did not have good intentions by today’s standards, and that the panoply of progressive regulations, such as the minimum wage, today argued for in order to uplift the impoverished poor, were in fact designed to do just the opposite—unemploy them, just as economic theory predicts.