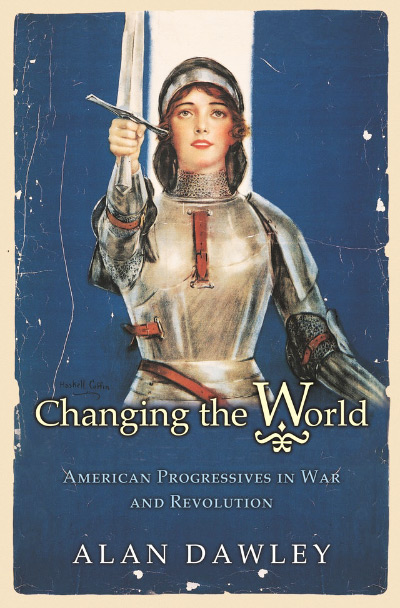 Changing the World
American Progressives in War and Revolution
By Alan Dawley
Hardcover Paperback
This book review appeared in the Fall 2006 issue of The Independent Review.

At the end of his “Four Freedoms” speech in January 1941, Franklin Roosevelt recommitted the United States to the Founders’ “perpetual, peaceful revolution” on behalf of change. That ceaseless revolution, he pledged nearly a year before Pearl Harbor, would now oppose totalitarianism’s “new order” by defending and expanding a “moral order,” a “world order,” of universal civil liberties, economic justice, disarmament, and international cooperation. The yearning to change the world runs deep in U.S. history. From the Puritans’ redemptive mission to the Enlightenment’s secular New Jerusalem to evangelical millennialism, America and its foreign admirers have constructed a national destiny of dizzying heights. The high-water mark of that calling (so far) came with the Progressive Era’s righteous crusade to redeem America and the world, a wave of reforms that later shaped FDR’s New Deal and war socialism.

Alan Dawley’s Changing the World: American Progressives in War and Revolution interprets the progressive movement in light of this redemptive impulse. Dawley tells the story of the “founding generation” of American Progressives during roughly the first third of the twentieth century. He follows the rise, fall, and rebirth of the founders’ movement, with all of its contradictions, ironies, good intentions, mixed results, earnest efforts to remake and perpetuate itself after the disappointments of World War I, and subsequent revival in the New Deal. He focuses primarily on the Progressives’ engagement in social and economic justice, commitment to the public interest, internationalism, and optimistic faith in human progress. These reformers left a deep imprint on the American character and what it means to be a good citizen. In fact, “the progressive generation gave America a social conscience and a more cosmopolitan outlook” (p. 72). Changing the World is a sympathetic story written by a faithful, disappointed, yet hopeful believer who sees the best of the Progressive agenda as “still pertinent” to U.S. politics and foreign policy, who regrets progressivism’s co-optation by the vague bipartisan liberalism of post–World War II politics, and who awaits its revival in the twenty-first century.

A clear indication that Changing the World operates within the Progressive paradigm is Dawley’s positive assessment of reformers’ efforts to achieve economic justice within an ethos of civic-minded republican virtue. Using Walter Lippmann’s rubric of “drift and mastery,” Dawley highlights the Progressives’ resort to government control to impose order on the excesses of individualism and emphasizes the alleged chaos of the laissez-faire capitalism that flourished in America at the end of the nineteenth century. Social legislation was needed to master the drift of the free market. Dawley gives little attention to midwestern agrarian populism and nearly none to southern agrarianism as alternative, more decentrist forms of opposition to industrial capitalism. He admires the German socialists of Wisconsin, however, to the point of dreaming that “if all the world were Wisconsin, [then] the twentieth century might have been an age of the golden meridian in which small producers and industrial craftsmen used republican ideals of equal rights to moderate the special privileges that had been granted to big business under laissez-faire liberalism” (p. 60).

Dawley simultaneously examines the Progressives’ domestic and foreign-policy agendas, rightly noting that “to many prominent progressives, reform at home and expansion oversees were two parts of the same process” (p. 32). Indeed, “redeeming America and redeeming the world were two sides of the same coin” (p. 130). The Progressives waged a “dual effort” on the domestic and international fronts to achieve economic and social justice as well as greater civic engagement at home and international cooperation abroad. This “dual quest,” however, did not materialize into the same goals for every Progressive. Generally allowing Progressives to define and label themselves, Dawley reveals the unstable mix of ideas that troubled the movement and often set it at cross purposes. Progressive meant anyone from the more conservative realists on the reformist right, such as Theodore Roosevelt, to the more liberal idealists, such as Woodrow Wilson. Dawley correctly identifies these two men, despite their personal and ideological differences, as a “perfect pair” for their morally redemptive and activist foreign policy that satisfied “the itch to uplift and the itch to control” (p. 79).

Bothered by Wilson’s self-righteous idealism and Theodore Roosevelt’s aggressive nationalism, however, Dawley gravitates instead to the true left of the progressive spectrum. Progressivism’s flaw was that it did not push the nation’s political boundaries far enough toward socialism and internationalism. Jane Addams and Robert M. La Follette emerge, therefore, as the true heroes of this story: Addams for her anti-imperialism, support for immigrant minorities, social conscience, moral realism, and “world consciousness” (p. 298); and La Follette, “the father of progressive politics” (p. 7), for his gutsy opposition to “dollar diplomacy” and U.S. entry into World War I, and for his leadership of a revived but truncated progressivism in the 1920s that was more genuinely a movement of the left. With Dawley’s focus on the ideological left, however, conservatism’s significant intellectual and cultural achievement vanishes; none of the old laissez-faire liberalism appears except as a foe to be vanquished; and few southern voices are heard except to show the South as little more than a racist, fundamentalist wasteland. Dawley regrets that the triumph of the modern liberal political consensus has made the real left invisible (p. 352), but the same regret might be felt for the fate of these other groups in his hands. Nevertheless, every historian writes from a point of view and has his principles of selection and exclusion, and Dawley’s account of these years is broader than many.

This breadth is evident in his discussion of America’s messianic identity. He goes a long way in capturing a powerful dimension of American character and conduct. Singing “Onward, Christian Soldiers” and “The Battle Hymn of the Republic,” which was “the foremost anthem of messianic Americanism” (p. 145), crusading reformers marched into literal war in 1917 to universalize their reforms and to achieve domestic and international redemption. However, the degree to which Dawley links messianic Americanism to nationalism and WASP ethnicity suggests that internationalists and marginalized American ethnic and religious groups were not prone to the same hubris. Showing messianic Americanism’s obvious connection to nationalism and Anglo-Saxon Protestantism is easy. More complex (and perhaps embarrassing to the Progressive cause) is the degree to which internationalists and spokesmen for religious and ethnic minorities were caught up by messianic zeal as well. Internationalism was a variation on the same impulse to redeem the world, the same “itch” to improve. Only their means may have separated internationalists from nationalists. A number of prewar pacifists (especially in the ranks of the social gospel movement) found it natural to speak at once and with a clear conscience of both brotherhood and total war. After all, what could be of greater service to the world than to wage civilized humanity’s last war and to bless the world with permanent peace and justice? Although the messianic consciousness may well have been largely “a European invention” (pp. 128–29) perpetuated by the heirs of the Protestant Reformation (p. 130), it does indeed, contrary to Dawley’s claim, “stretch the truth too far to say that messianic Americanism was the ethnic nationalism of the Wasp”

(p. 124). America’s messianic identity reached far beyond the WASP. The wartime speeches of Rabbi Stephen Wise and many priests show that American Jews and Catholics did in fact “celebrate” their nation’s messianic myth (p. 124). Further complicating the story, by 1929 the southern agrarians of I’ll Take My Stand, who would be startled to find their region described as the “prime bastion of the redeemer mentality” (p. 146), explicitly rejected the creed of “Americanism.” America’s messianic identity simply does not fit tidily into Dawley’s explanatory scheme.

Aside from this important limitation, Changing the World is a valuable study of the Progressive movement from the hand of a sympathetic yet critical historian. It is written in clear, breathable prose. Imaginatively reentering a distant yet oddly familiar world, Dawley “reads” history forward as the participants experienced it, keeping questions open (p. 107) and stressing the actual choices possible to real historical actors (pp. 130–31). Despite his own ideological preferences, he refuses to connect events into a predetermined pattern that appears inevitable only in hindsight to smug historians, although his formulaic and repeated use of race, class, and gender becomes tiresomely predictable. Commendably, Dawley attempts to “internationalize” historians’ understanding of the Progressives, an effort that can be carried even further. He explores the international context in which the Progressive mind took shape and in which the American reform agenda developed in cooperation with like-minded or even more radical reformers in Europe. He also “internationalizes” the historical analysis of the Progressives by measuring them against successes and failures elsewhere and by recapturing a clearer sense of the range of options that might have been available to them. Unfortunately, the book is marred by a number of historical errors. The income tax, for example, was made constitutional by the Sixteenth Amendment, not the Seventeenth (p. 121), and the words “last best hope on earth” appear nowhere in Lincoln’s Gettysburg Address (p. 128). The book’s frequent typographical errors are also distracting. In short, the manuscript needed a good scrubbing by a copyeditor with his sleeves rolled up.

As twenty-first-century America expands the welfare state at home and exports democracy abroad, the story of the Progressives’ ambition to change the world is increasingly relevant. Dawley’s hope for a Progressive revival may be fulfilled in ways he does not intend. Perhaps the greatest irony of the Progressive Era will turn out to be the degree to which conservatives and even some libertarians think and act according to their earlier opponents’ major premises. Maybe we all are Progressives now.