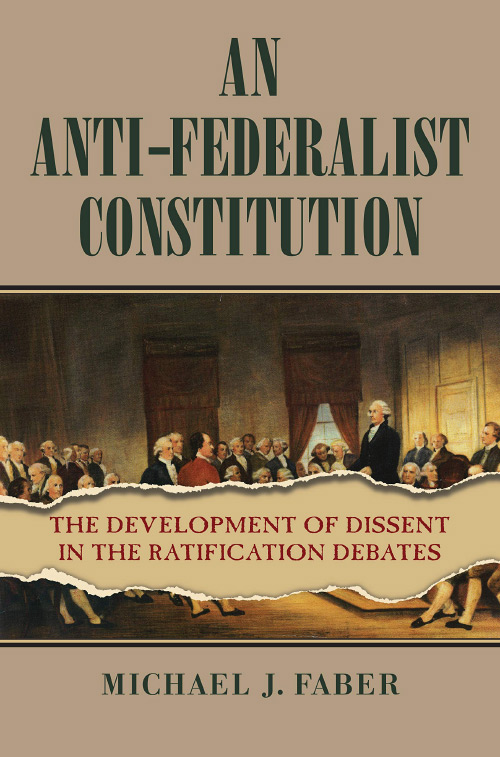 An Anti-Federalist Constitution
The Development of Dissent in the Ratification Debates
Michael J. Faber
Kindle Hardcover
This book review is a web exclusive for the Fall 2020 issue of The Independent Review.

For decades, the opponents of the Constitution of 1787 (known to history as “Anti-Federalists”) have been vilified as “men of little faith.” The American intellectual class has focused on the Constitution’s proponents and elevated their pro-ratification newspaper essays to God-breathed political theory. Fortunately, some scholars are rethinking the Anti-Federalists and examining their warnings about the Constitution.

Michael J. Farber in his new book, An Anti-Federalist Constitution, offers a thorough discussion of the ratification debates in the several state conventions and tries to envision what an Anti-Federalist constitution would have looked like. He treats Anti-Federalist arguments with respect and is not afraid to draw attention to questionable tactics employed by their opponents.

Farber has great love for taxonomy and is determined to fit each Anti-Federalist critic into one of three groups: Rights Anti-Federalism, “focus[ing] on the individual and the potential for government tyranny”; Power Anti-Federalism, concentrating on “a more careful balancing of powers between the state and national governments”; and Democratic Anti-Federalism, advocating “a more positive and direct role for the people in any government” (pp. ix–x).

Efforts at classification get messy and distracting. For example, Farber classifies Richard Henry Lee as a Rights Anti-Federalist because Lee urged that a bill of rights be added to the document. But Farber could just have easily labeled him a Power Anti-Federalist based upon his October 1, 1787, letter to George Mason: “The greatness of the powers given & the multitude of Places to be created, produces a coalition of Monarchy men, Military Men, Aristocrats, and Drones whose noise, impudence, & zeal exceeds all belief.”

What Farber divides as Rights and Power Anti-Federalism are really just different sides of the same coin. The Constitution endangered the people’s rights because it empowered a distant central government to intervene in many of their affairs. The state governments, being closer to the people, were safer repositories of power. State representatives knew the minds and habits of the people from mingling and working among them. Similarly, the representatives were close at hand if the people needed to remonstrate. And, with frequent elections, the people could more easily vote offending rulers out of office.

Yes, a bill of rights would serve as beacon for the people to appeal to when federal officials exceeded their powers, but both so-called Rights and Power Anti-Federalists sought the same goal: protection of the people from wicked or overbearing rulers. Hence, classifying men in the Rights or Power categories is misleading and not helpful.

To his credit, Farber contends that, by the end of the ratification debates, there “was a distinct and fairly consistent opposition position that favored a stronger federal system, a simpler and more transparent government, and an effective and extensive bill of rights” (p. x). However, he doggedly uses his three categories throughout the book.

Early on, Farber identifies the biggest hurdle for the Anti-Federalists: “They had something to argue against” but no comprehensive package to put forth as an alternative (p. 25). Moreover, they had little time to coordinate an attack on the Constitution inasmuch as Federalists pushed the states to move quickly in holding ratification conventions. Zealous Federalists within the conventions also tried to spin results to make it appear that the Constitution enjoyed wide support. For example, in Pennsylvania, the Federalists prohibited opposition delegates from recording their opinions in the minutes and did not allow proposed amendments to appear in the official record.

Faber’s edits begin with the preamble. The Anti-Federalist preamble reads: “We the people of these sovereign States, in forming a Confederation and Perpetual Union” establish this government on certain principles (p. 355). Enumerated principles follow that include popular sovereignty, frequent elections, inherent rights, and the duty of government to protect rights and promote happiness. The Constitution’s preamble was a stumbling block for Anti-Federalists because it seemed to announce a consolidated government. Faber’s changes make clear that the union remains a confederation and that the states are the building blocks. The principles listed are Faber’s effort to distill the ideas of the American Revolution. The Anti-Federalists believed that the proposed Constitution abandoned the Revolution and exchanged the Spirit of 1776 for the centralizing tendencies of the British system.

Article I no longer begins with legislative power, but a bill of rights. The lack of a bill of rights was a primary Anti-Federalist objection, and thus the revised Constitution starts off with rights rather than government powers. Many of the rights included are familiar and protect speech, assembly, privacy, and property. In a modified version of the Tenth Amendment, the Anti-Federalist constitution declares, “All powers not expressly granted to the United States government in the articles below are reserved to the legislatures of the several States. ... The Government shall not interfere in the internal matters of any State, except upon the request of that State, or as otherwise provided in this Constitution” (p. 358). The Anti-Federalists rightly feared implied powers and the use of such powers to turn the states into administrative subdivisions of the national government. This revision, with its much stronger language than our current Tenth Amendment, is aimed at keeping the new government from meddling in local affairs.

Of course, the Anti-Federalists knew that much more was needed than strong declarations. For this reason, Faber has removed from the Constitution expansive provisions such as the Necessary and Proper Clause and the General Welfare Clause. In addition, our much-abused Commerce Clause in the Anti-Federalist constitution requires a two-thirds majority in Congress before legislation can be passed.

The Anti-Federalist constitution contains many other reforms such as a more meaningful representation by requiring that House members be elected from districts no larger than twenty thousand persons, term limits, creation of a council elected by the House to advise the president, and a much-reduced system of federal courts.

Faber is very faithful to the Anti-Federalists in his constitution drafting, but he does not endorse their small-is-beautiful vision of government. If we had an Anti-Federalist constitution, Faber contends, “many of the significant national accomplishments of the last two centuries would not have been possible” (p. 397). By this he means the welfare state, administrative state, and an interventionist foreign policy. It is debatable whether these excesses should be considered “accomplishments,” but Faber thinks so.

He also plays the slavery card and asserts that a violent conflict between the South and North would have forever torn the union apart absent a strong central government. He ignores that in most of the world slavery was abolished without a murderous war—the United States and Haiti being exceptions. There’s no reason to assume that the Civil War was inevitable or that a national bloodbath was necessary for slavery to disappear from North America. Yet, Faber is happy to follow the “court” historians on this issue as well as what “accomplishments” equal greatness.

On the whole, Faber provides a good account of the ratification contest, and his Anti-Federalist constitution incorporates most of the important changes urged by the Constitution’s opponents. Unfortunately, Faber admits having little faith in the Anti-Federalist vision of a self-governing America and prefers our omnipotent national government as opposed to a confederation with limited federal powers.