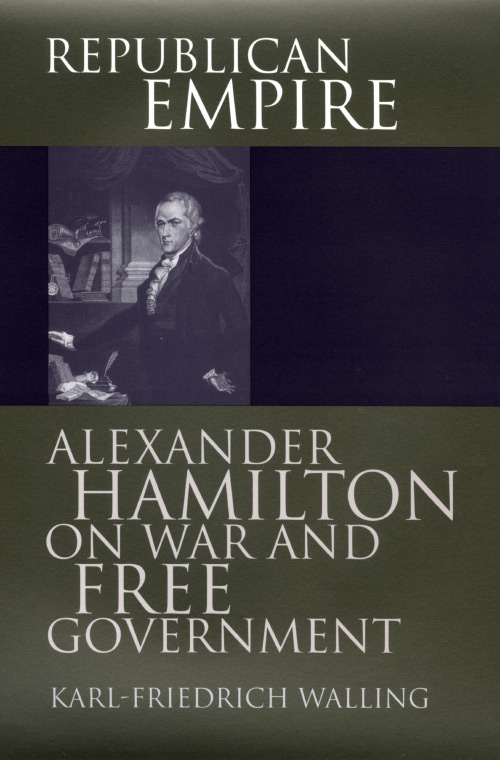 According to one of the precious little stories of the founding of the United States, after the Philadelphia convention Benjamin Franklin was asked what the delegates had come up with for the country. His answer was, “A republic—if you can keep it.” That republics—free governments based on consent of the governed—have not been easy to keep is the starting point of Karl-Friedrich Walling’s deep and scholarly meditation on political science and history. The main wrecker of republics has been war. In both the ancient and the modern worlds, Walling writes, “The necessities, accidents, and passions of war contributed mightily to the collapse of free governments” (p. xi).

The United States, he contends, is “the outstanding exception to the well-grounded historical axiom that war is the destroyer of free governments,” adding, “After more than 200 years under essentially the same Constitution, Americans have fought numerous wars, both major and minor, both declared and undeclared, yet they still remain free. Why?” (p. xi). Walling’s short answer, elaborated in the book, is Alexander Hamilton.

Hamilton? Most Americans, if they think about Hamilton at all, recall him as the man on the ten-dollar bill and as the first secretary of the Treasury, who straightened out the country’s tangled public finances, in the process shaping its financial system and its diversified, capitalist economy. Those who delve a little more into the founding era know that Hamilton was a prime mover for the Constitution, its defender and expositor in The Federalist, and the initiator of the Constitution’s expansive or broad construction. They also know that Hamilton’s policies as Treasury secretary were controversial, provoking an Anti-Federalist opposition that coalesced under the leadership of Thomas Jefferson and James Madison into a political movement stressing states’ rights, strict constitutional construction, and an agrarian economy.

Walling, who seems on the evidence of his book to have read just about everything that Hamilton ever wrote and much of what has been written about him, views Hamilton differently and from two angles. One angle is that of Hamilton’s contemporaries, who saw him as a military man and the army general Americans buried with full military honors in 1804 while visiting British and French warships fired salutes in New York harbor—a leitmotif used to indicate that Hamilton, more than most of his contemporaries, was familiar with war and military leadership.

Walling’s other and main angle is to view Hamilton as both a substantial political theorist and a practical statesman dedicated to founding an American republican empire, one that would combine the strength to endure with the consent of the governed that would justify its endurance. Based on close reading of Hamilton’s voluminous writings, he makes a good case that figuring out how such a republican empire could come to be was the problem of statecraft Hamilton hoped to solve, thereby achieving his goal of lasting fame. If Walling is right, we can dismiss many of the charges that were and still are leveled against Hamilton, such as that he was a monarchist, an aristocrat, a militarist, an American Caesar, a Cromwell, a Napoleon, and so on. Walling regards him as a modern, liberal republican.

Hamilton’s vision for his country, according to Walling (p. 96), was that it become a republican empire based on consent but able when threatened to generate enormous military power. His great opponents of the founding era, Jefferson and Madison, applauded republican consent but feared military power, which they saw—a fair reading of history—as a threat to a republic. Jefferson’s alternative “empire of liberty” would avoid the energetic central government, commercial-industrial society, and military establishment that Hamilton proposed by decentralizing power and having an expanding agrarian frontier serve both as a safety valve for societal pressures and, more positively, as the object for Americans to develop economically. Madison’s “extensive” or “compound” republic was somewhere between Hamilton’s and Jefferson’s visions; its size would moderate the abuses of faction, and an equal sharing of powers by federal and state governments would allow each to check the other.

To Hamilton, Jefferson and Madison’s visions were hardly an improvement on the weaknesses of government, public finance, and military capabilities that he had experienced firsthand during and after the Revolution. Jefferson’s westward expansion with a weak central government would only lead to disunion and eventually to civil war. Madison’s compound republic would only delay disunion and civil war, not prevent them. Hamilton believed that parochial state interests and jealousies had been the country’s main problem in its early years; hence, they were unlikely to become the means to hold it together in safety and prosperity. Indeed, Walling notes that Hamilton ardently hoped that Americans would transfer their primary political loyalty as quickly as possible from their particular states to the United States as a federal union.

As de facto prime minister in Washington’s administration, Hamilton worked vigorously to implement both constitutional mandates and the elements of his political theory. Among these, Walling includes executive energy and an independent judiciary. An energetic U.S. president would “avoid the extremes of constitutional weakness . . . and unconstitutional prerogative” (p. 96), and a strong federal court system would reduce the danger of the militarism so feared by his opponents. It would settle disputes by the rule of law, not by force. Moreover, with judicial review of legislative and executive actions, the courts would help to assure the people that the two more powerful branches of the government would act in conformity with the Constitution.

Developing the individual’s primary loyalty to the federal union rather than to his state would take time, but could be promoted by an energetic and efficient administration of the government, which would demonstrate palpably that the people’s interest lay in giving their consent to it. Hamilton’s financial and economic measures were designed to achieve that objective. They would generate the opportunities, wealth, and power that Americans might view as ends in themselves. Walling maintains that to Hamilton they were more the means to ensure the country’s political and economic independence.

While Hamilton responsibly executed his grand plans, his opponents vigilantly probed and attacked them. Born in the heated debates of the Federalist era, Walling observes, was the American political tradition wherein the administration takes on the responsibility of protecting and advancing the nation’s interests and the opposition assumes a stance of vigilance toward the administration and its policies. The tradition was cemented after 1800, when in a reversal of roles Jefferson and his administration became responsible, while Hamilton and the Federalists became their vigilant critics. Walling’s development of the responsibility-vigilance theme is one of the many merits of his study. He reminds us that partisan politics American style is less about the good guys and the bad guys, and more about differing views of what is in the best interests of the country.

The greatest differences between Hamilton and his political opponents involved war. Distrusting the intentions of all the great powers of Europe, Hamilton feared that war was right around the corner and that a responsible administration had to prepare the country for it. His opponents were less fearful of war and more trusting of European intentions. By the end of the 1790s, those opponents included not only Jefferson and Madison, but also President John Adams, who resented Washington’s insistence that Hamilton be commissioned a major general and made inspector-general, akin to today’s army chief of staff, during the quasi-war with France.

Late in 1800, Hamilton disbanded his army after Adams negotiated a weak peace with France. Simultaneously and secretly, First Consul Napoleon Bonaparte, France’s strongman, prevailed on Spain to cede Louisiana back to France. Had this action been known, it would have undone the peace deal. When it became known a year later, Jefferson joined Hamilton in regarding it as a major threat to the country. Napoleon prepared to send not one, but two, large armies to Louisiana to assert his claim and reestablish a major French presence in North America, but fate intervened. The slave revolt in Haiti diverted one French army there, where it became bogged down with heavy losses and lack of success. And a rare freeze of Amsterdam’s harbor delayed the sailing of the other French army long enough to make an alternative deployment preferable. But for those fortuitous events, Walling speculates, Hamilton’s worst fears might have been realized, and his preparations for war vindicated. Instead, Napoleon proclaimed himself emperor, sold Louisiana to Jefferson, and used the proceeds to become the scourge of Europe. The resulting wars would soon engulf the United States, but by that time General Hamilton had been laid to rest.

Although the fates thus conspired to obscure Hamilton’s seminal role in shaping U.S. institutions, Walling concludes that history vindicates it:

Though it took some time . . . and his adversaries never acknowledged it publicly, Hamilton won all the fundamental debates about American national security policy. Broad construction of the Constitution and executive power; judicial review; a credit-based, manufacturing economy; military academies; an ocean-going navy; a rapidly expandable army in time of peace; and a national spirit rooted in Americans’ devotion to both Union and liberty are now cornerstones of our common defense. (288)

As was the case in Hamilton’s own time, more than a few Americans no doubt will continue to debate whether Hamilton’s triumph was also theirs.