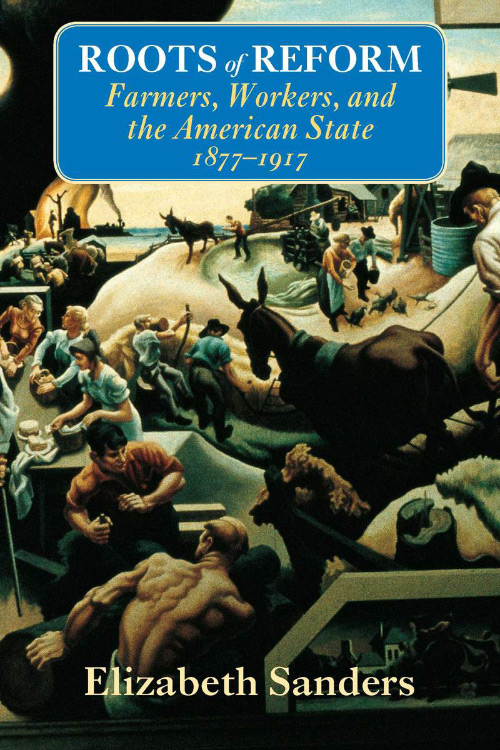 Roots of Reform
Farmers, Workers, and the American State, 1877–1917
Elizabeth Sanders
Hardcover Paperback
This book review appeared in the Winter 2000/01 issue of The Independent Review.

In Roots of Reform, Elizabeth Sanders sets out to explain the development of the American national state during the late nineteenth and early twentieth centuries, maintaining that modern American statism can be traced to the farmer protest movements of the last third of the nineteenth century. Sanders’s thesis is straightforward: “agrarian movements constituted the most important political force driving the development of the American national state in the half century before World War I” (p. 1). Aligned politically with industrial workers, farmers, especially periphery farmers, comprised the important force behind American statism.

Sanders contends that most historical and sociological studies of the development of the American state concentrate on the failure of farmers and workers “to restructure economic relationships and erect a positive populist or social democratic state” (p. 2). What the “literature has not provided is an account of the political interaction” (p. 2) of farmers and workers, nor has it considered that the expansion of American statism during the Progressive Era originated with farmer demands. The literature fails to emphasize the importance of farmer movements because “the first wave of the new social history” (p. 2) exhibited an urban bias, and the renewed interest in state theory in the 1980s led to a capitalist-worker bias. In state theory, state actors are seen primarily as executive branch officials whose constituencies are capitalists and industrial workers. Sanders also argues that political scientists often do not recognize that social movements both shape the development of the state and are shaped by the actions of state actors.

As the United States evolved into various regional economies during the nineteenth century—the manufacturing belt, the corn belt, and the cotton belt, among others—the regions developed distinctly different constituencies, and they came to be represented in Congress by legislators who represented those constituencies. According to Sanders, the United States can be classified into three general types of regional economies: core, diverse, and periphery. A core region has an economy based and dependent on industrial and manufacturing activities. A diverse region has an economy with a wide range of economic activities and is not based or dependent only on industrial activities or only on farming activities. A periphery region has an economy based and dependent on farming activities and is peripheral to the industrial and manufacturing regions.

Sanders examines the political agendas of late-nineteenth-century and early-twentieth-century farmer and worker movements, discusses the role of each movement in the Democratic and Republican Parties as well as in major third parties, and analyzes U.S. legislative history between 1877 and 1917. The book offers more than a descriptive account of the role of farmers and workers in American statism. It has a quantitative dimension as well, including an examination of congressional votes on nearly one hundred pieces of legislation (or procedural issues) considered in the House or Senate, with a detailed quantitative examination of nearly sixty votes during the Progressive Era. Sanders employs the Progressive Era votes to indicate what percentage of Democratic or Republican legislators from a core, diverse, or periphery congressional district or state supported a particular piece of legislation or issue, but does not employ them in any formal statistical analysis of congressional voting.

Chapter 2 presents the formal classification of the core, diverse, and periphery areas of the United States in the early twentieth century. (The data do not exist for the nineteenth century.) The author classifies each congressional district and state according to whether its economy was primarily based on industry and manufacturing, agriculture, or diverse activities. The value added in manufacturing in congressional districts and states is the criterion used for the classification. Sanders maintains, however, that such a classification alone is too limiting to measure the relevant economic constituencies that congressional legislators represent. A better measure is whether the primary economic trading area in which a district or state is located is core, diverse, or periphery. Sanders therefore determines thirty-four primary economic trading areas for the United States based on the twelve Federal Reserve cities, the twenty-two designated branch-bank subregion cities, and their hinterlands. Each trading area is classified based on its value added in manufacturing per capita, where a core area has greater than $300, a diverse area has between $200 and $299, and a periphery area has less than $200 in value added in manufacturing per capita. Sanders then places each congressional district and state into its relevant trading area based on where the majority of its population resides and classifies it as core, diverse, or periphery according to its trading area classification.

In the remaining three chapters of part 1, Sanders examines the political activities of late-nineteenth-century and early-twentieth-century farmer movements and labor organizations, their roles in statist legislation enacted during the period, and the evolution of the farmer-worker coalition. These chapters tell the history of farmer and labor activities, with concentration on antirailroad and antitrust sentiments and well-known industry-worker conflicts. Sanders concentrates on specific legislative activity of the late nineteenth century—namely, the creation of the Interstate Commerce Commission, the passage of the Sherman Antitrust Act, the enactment of state-level employment legislation, and restrictions on contract labor and open immigration.

As U.S. industrialization continued at a rapid pace during the last third of the nineteenth century, the relative position of farmers declined. As a result, agrarians tended to blame their plight, often incorrectly, on the monopoly power of eastern industrialists, railroads, grain elevators, milling companies, moneylenders, and others. Farmer movements (the Grangers, Greenback Party, Alliances and Wheels, and the Populist Party) in turn demanded state action to prohibit monopolies, regulate railroad and other transportation rates, prohibit pooling arrangements and trusts, prohibit commodity speculation, establish government control of the money supply, and authorize the outright public ownership of some industries. On the labor front, the Knights of Labor, the American Federation of Labor, the International Workers of the World, and various socialist labor organizations, among others, rose to prominence during this time. Labor movements tended to demand state action that would directly improve the lot of workers, such as the eight-hour day, improvement of working conditions, prohibition of contract labor, and restrictions on immigration.

In part 2, Sanders examines farmer and worker movements during the Progressive Era, when most of their demands were ultimately enacted in one form or another. She provides a detailed examination of the enactment of legislation between 1909 and 1917 involving state intervention in transportation, trade, taxation, banking, antitrust, commodities markets, education, industrial employment, and public enterprise. In six chapters arranged by economic sector, Sanders presents an examination and quantitative analysis of congressional votes. Overall, the quantitative analysis indicates that legislators from the periphery heavily supported most of the statist legislation of the Progressive Era. In many cases, such support by legislators from the periphery was multiples greater than that by legislators from the core (see, for example, tables 6.2, 6.3, 6.4, pp. 205–6). In other cases, the support from the periphery was greater but close enough that a hypothesis that the differences in voting are the result of chance variation cannot be rejected without a formal statistical analysis (see, for example, tables 7.2, 7.6, 8.2, pp. 228, 252, 289).

Sanders concludes that periphery farmers were progressive statists who supported a statutory reform agenda. Yet because they were also antibureaucratic, with no desire to see the growth of the administrative state, they might be considered antistate, in a sense. Labor organizations, on the other hand, were antistate in each sense. With important exceptions, labor opposed expansion of the bureaucratic and the statutory state. Labor consequently offered very weak support for much of the agrarian-led progressive agenda. Agrarians, however, could not succeed nationally without the support of labor in the core areas of the country; therefore, they adopted labor’s legislative program. But the weakness of the coalition created a fundamental problem. Notwithstanding that farmers and workers both opposed a bureaucratic state, at several critical junctures they were unable “to make a common political cause, to align their interests in a strong legislative party ... to control the national political agenda” (p. 414) and move it toward more statuary reform. Consequently, the president and executive branch officials, core Republican legislators and their capitalist constituents, and some progressive legislators from diverse areas were able to shape American statism toward a bureaucratic administrative state.

Although Sanders’s agrarian view of American statism has much merit, and her regional-economic classifications are insightful and potentially useful in a statistical analysis, there is much to decry in her book. First, her agrarian thesis is not new. Economic historians have long recognized that farmer movements were important in shaping the American state, as any economic history textbook indicates. For example, Gary M. Walton and Hugh Rockoff observe that “we need to take a close look at the political forces spawned by the farmers’ discontent, for the reforms proposed by the agrarian protesters helped shape the institutional framework of the American economy” (History of the American Economy, 8th ed. [Dryden Press, 1998], p. 342). Although Sanders does not acknowledge the view maintained in the economic history literature, she is certainly aware of that literature because she cites it in other contexts—but apparently only when it supports her view of the economic environment. She cites studies that tell a monopoly-based, debt-peonage story of the postbellum southern economy, but she ignores studies that call that story into question. She also misrepresents other economic history studies. In discussing interest rates paid by farmers, she ignores that the studies she cites conclude that higher farm interest rates were most likely owing to the higher risks in farming, not to the monopoly power of lenders. Sanders likewise appears to accept contemporaneous analyses of farmers at face value. But as Walton and Rockoff indicate, “modern [economic history] research has rejected many of the analyses put forward in the late nineteenth century” (342).

Much of Sanders’s documentation is dated. In many cases, especially those related to contemporaneous economic conditions, Sanders relies on studies that are nearly a century old. Her study also contains errors of economic fact. For example, in discussing tariff legislation, Sanders incorrectly refers to the Dingley Tariff of 1897 as having “imposed the highest rates in U.S. history (an average of 52 percent)” (p. 219). After enactment of the Tariff of Abominations in 1828, however, the comparable average rates were more than 61 percent in 1830, and following enactment of the Smoot-Hawley Tariff in 1930, the comparable average rates were between 53 and 59 percent in 1931–33. The problem in Sanders’s documentation arises because the sources she cites do not include comparable average tariff rates for the pre-Civil War years or for the 1930s and afterward.

Roots of Reform could have been a useful story of the historical importance of farmer movements and the role of periphery legislators in the rise of American statism, but instead Sanders wrote it with a missionary zeal for a particular audience to “reclaim the agrarian radical heritage” (p. 410). In the end, the author’s bias becomes clear as she explicitly advocates adopting an agrarian statutory model of statism to “tame and democratize a lusty market economy” (p. 419).

Robert A. McGuire
University of Akron
Agriculture RegulationAmerican HistoryEconomic History and DevelopmentEconomyLabor and EmploymentLaw and Liberty
Subscribe Buy This Issue Get the App