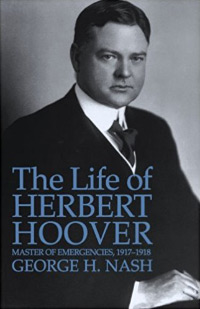 The Life of Herbert Hoover, vol. 3, Master of Emergencies, 1917–1918
George H. Nash
Hardcover Paperback
This book review appeared in the Winter 1997/98 issue of The Independent Review.

This volume, covering the period of American belligerency, examines Herbert Hoover’s activities as he headed the United States Food Administration while continuing to oversee the Commission for Relief in Belgium. As in the earlier parts of this biography, George H. Nash carefully leads the reader through masses of intricate detail, evaluates his subject sympathetically and critically, and relates Hoover’s behavior as a public figure to his personality as well as to circumstances he faced. What emerges is the picture of formidable bureaucrat, a believer in tempered market capitalism, grappling with the problems of a command economy. At the same time, Nash presents an enlightening, if not entirely inspiring, picture of the way Americans on the home front undertook the burdens of the Great War. His work should be of particular interest to scholars and general readers of presidential biography and history, to persons interested in economic mobilization during World War I, and to students of bureaucratic turf warfare.

Hoover’s task was highly demanding. He had to create, staff, and run an organization that would feed the American army, supply the Allies with much of their meat and grain, and assure adequate food supplies to American civilians—all this after a poor harvest and with a defective transportation system and while German submarines were doing their best to keep food from crossing the Atlantic. The obstacles at home were formidable, too: “progressives” wary of allocating power to the businessmen who worked for the Food Administration; politicians and other bureaucratic leaders suspicious of Hoover himself; workers who Hoover feared might revolt if not given adequate supplies of bread; producers and middlemen who dealt with one another as adversaries; and large differences in the willingness of Americans to sacrifice for their country, with many people viewing the war as an opportunity to fill their pockets.

Although Nash does not say so, the food administrator’s tactics were in many respects typical of the way the Wilson administration mobilized the American economy. Like the administration as a whole, Hoover created a system of centralized management, which he considered almost a variety of socialism, but with built-in mechanisms that would make it self-destruct when the war ended. For instance, he staffed his organization with borrowed business executives who would go back to their companies when the emergency had passed. Like other agencies, such as the Treasury Department and the War Industries Board, the Food Administration staged public demonstrations as a way of building support for its programs and issued floods of propaganda. Its appeals to patriotism (and the implication that those who did not cooperate were unpatriotic) helped induce volunteering. Where that was insufficient, Hoover, like other administration executives, developed means to compel the public to do what the government wished. At the same time, believing profits were an essential motivator in war as in peace, he saw to it that even inefficient producers were paid enough to be profitable. Like many of the administrators of the American war economy, he often approached his objectives obliquely, using what he called “engines of indirection” (p. 15).

Although he was known among his associates for bluntness and honesty, Hoover relied to a large extent on deception and manipulation. Privately he described his job as food “dictator,” but he referred to himself in public by the softer title of “administrator.” He “cooked” official records when it served his purpose and sought to suppress information at odds with his programs. He told his critics, at least in the early months, that he was not fixing prices, only “stabilizing” them. Yet he knew very well that he had to fix prices, and to do so he stretched his authority under the law. The Lever Act of 1917 had given him the ability to license food wholesalers and retailers but not to decide what they should charge. So the Food Administration simply ruled that no wholesaler or other food handler that it licensed could sell any food to businesses that charged “unreasonable” amounts. Always determined to use food as an instrument of warfare (in his own mind, apparently, America’s chief instrument of warfare), Hoover was prepared to turn the screws on anyone—including neutral countries, allies, and interest groups at home—who interfered with his program. When things went wrong, his publicity apparatus placed stories in the press or Hoover himself testified about how something or someone else (the weather, which really was awful, the hog farmers, the railroad administration) was responsible for the problem.

Things did go wrong much of the time, and Hoover found himself grappling with unintended consequences of his agency’s actions and of contradictions within his program. He tried both to curb demand for scarce products and to keep prices down. Substantial increases in the cost of food would have led to hoarding and more scarcity and eventually, perhaps, to urban riots. Yet low prices helped sustain the quantity demanded he was trying to limit. To reduce wheat consumption he compelled bakers to produce “victory” bread containing other grains, such as corn. The price of corn began to rise, threatening to increase the cost of corn-fed livestock. He urged farmers and ranchers to produce more. They did. He urged homemakers to conserve meat with “meatless” days. They complied. But then, as tens of thousands of pigs poured onto the market, unleashed by farmers who thought Food Administration policies would lead to lower prices, Hoover found himself facing an enormous glut. He implored farmers to plant more wheat, promising to pay a guaranteed price. In 1918 they produced so much that he ran out of money to pay them. Reluctant to end the conservation programs, which he felt were creating a necessary psychology of national self-denial, and unable, even if he had wanted to, to nullify price supports, he turned to the Allies to rescue him—to take more pork and to buy a large part of the American wheat crop in advance.

“Whenever you begin to tamper with a normal course of commerce,” Hoover remarked, “you have to keep on tampering” (p. 297). Looking at the vicissitudes he faced, and helped to create, it might be tempting to see his experience as proof that a command economy cannot work. Yet it did work well enough in 1917 and 1918 to get the United States through the war. Despite all the problems and complaints of the wheat farmers and hog raisers, of the tomato lobby and angry meat packers, of sugar growers and congressmen, Hoover accomplished what he had set out to do. Of course it was just a short war—at least for the United States.

The Food Administration arranged to take reasonable care of all its clients. The Allies were fed, even Belgian civilians who had approached starvation. In America, workers actually ate more meat than before 1917. Producers and middlemen made money, if not always as much as they wished. By the end of the war Hoover appeared to have earned the respect that ordinary citizens accorded him, and the adulation his subordinates offered their “chief.” Astute planning, careful coordination with President Woodrow Wilson, stout defense of Food Administration policies, an effective public relations machine, and a willingness to shift tactics when necessary enabled Herbert Hoover to emerge as a civilian war hero.

George Nash’s account of these developments contributes to the ongoing rehabilitation of a man whose immense prestige dissipated rapidly during the Great Depression. It leads one to ponder why this protagonist, who coped so well with a succession of wartime crises, fared so poorly, despite considerable effort, in the economic collapse of later years. He was as tough and determined as the man who succeeded him as president and, at times, as evasive. Like Roosevelt, the food administrator managed news media effectively, at least during the war. He was every bit as willing to ignore theory to secure his goals and flexible enough, in the emergencies of 1917 to 1918, to alter programs that weren’t working.

Perhaps Hoover changed by 1929. Or maybe his later difficulty arose from his absence of charm, his stolidity and inability to look people in the eye, his unease as a public speaker, or his gloomy manner of describing problems. Perhaps it all went back to the way he had felt after he was orphaned as a child—as an outsider. There are hints in this volume of why Hoover, who overcame staggering problems during the war, found it so hard to cope with the crisis of his presidency.

We look forward to Nash’s insights into such matters as he continues his study of this distinguished, flawed, and often misunderstood public servant.