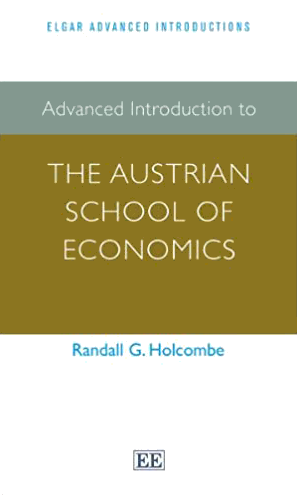 Advanced Introduction to the Austrian School of Economics
By Randall G. Holcombe
Hardcover Paperback
This book review appeared in the Spring 2016 issue of The Independent Review.

Following the fall of socialism in eastern Europe and the past two recessions, the Austrian School of economics has received unprecedented interest. The Austrians have long argued that socialism cannot allocate resources efficiently against mainstream claims that central planning can deliver faster growth than capitalism (see David Levy and Sandra Peart, “Soviet Growth and American Textbooks,” Journal of Economic Behavior & Organization 78 [2011]: 110–25). Similarly, the past two recessions have made it clear that aggregate supply and demand do not tell the whole story and that the causes of specific capital misallocations need to be understood (Lawrence H. White, The Clash of Economic Ideas [Cambridge: Cambridge University Press, 2012]). But the Austrian School is more than just these two instances of going against the mainstream. The most interesting aspect of the school is that it claims to provide a coherent account of the entrepreneurial market process from which such contrarian ideas logically follow.

Randall Holcombe’s “advanced introduction” is, hence, a very welcome contribution to the literature on the Austrian School. The book is aimed toward readers who are already familiar with the neoclassical equilibrium framework but are curious to learn more about the Austrian theory of what happens outside the equilibrium. Other recent introductions to Austrian economics have been either at a more introductory level (Gene Callahan, Economics for Real People [Auburn, Ala.: Ludwig von Mises Institute, 2004]) or at a far more encyclopedic level (Peter Boettke, ed., The Elgar Companion to Austrian Economics [Cheltenham, U.K.: Edward Elgar, 2004]; Peter Boettke and Christopher Coyne, eds., The Oxford Handbook of Austrian Economics [Oxford: Oxford University Press, 2015]). By contrast, Holcombe’s book is geared toward those who aren’t yet sure whether to invest the time to read the Austrian literature.

Does the book succeed? The challenge to provide a very concise account of an increasingly large literature is considerable. Furthermore, because Austrian economics goes against some key elements of neoclassical economics, both in terms of foundations and in terms of policy implications, to be convincing a sympathetic presentation needs to avoid straw-manning neoclassical economics. In my view, with a few exceptions, Holcombe does an outstanding job in meeting both challenges. His book is by far the best short introduction to Austrian economics that exists on the market today.

The first chapter introduces the key elements of the Austrian toolbox. First of all, the Austrian theory models all economic agents as fallible; they have access to limited and dispersed knowledge—that is, they know different things, and no one has full knowledge of what the others know. This assumption may create serious difficulties for building mathematical models, but it is nonetheless realistic. This is the situation that people face in the real world. Once we set up the analysis in such a manner, the main dilemma that economic theory needs to solve is, how do people’s plans ever get coordinated? This question is more complicated than just the question about resource allocation, and it includes an inherent time dimension.

The mechanism that Austrian economics uses to explain coordination is the agents’ entrepreneurial alertness to various opportunities for profit. All social order, the market in particular, is defined by the process of its emergence as all agents are constantly searching for opportunities that are yet unnoticed by others. In the case of markets, arbitrage plays a particularly important role in creating the system of equilibrium prices, which in turn provides information for wide-scale coordination. As Holcombe points out, several departures from the neoclassical models follow. Most importantly, competition is understood as a rivalrous and dynamic process, and the subjectivity of preferences looms much larger because of the assumption of heterogeneous knowledge. For example, different firms may make different assumptions about consumer demand, and their rivalrous competition provides a test as to which firm has made a better guess. In this way, the market reveals itself as a discovery process—a discovery of consumer demands and a discovery of new cost-reducing production methods. One of the key Austrian insights Holcombe reiterates throughout the book is that

goods and services do not have intrinsic value that somehow can be discovered independent of the transactions that determine and reveal that value. The market generates that information about the value of goods and services, so the information does not exist without the market to create it. This is especially significant with regard to capital goods, because they are durable goods whose value depends upon the value of the final goods they will produce. Expectations about future market conditions, clouded by the uncertainty of the future, determine the value of capital goods, and capital markets are required to coordinate these expectations of investors. (p. 48)

The second chapter provides a good overview of the Austrian theory of the firm as developed by authors such as Nicolai Foss, Peter Klein, Richard Langlois, and Frederic Sautet. This theory focuses on division of knowledge and the learning processes facilitated by the organizational environment of the firm. In the same way that the information provided by prices would not be generated without the market process, certain forms of knowledge required in the production processes would not exist without the environment of the firm. Holcombe also makes clear the reason for another important departure from mainstream economics: because of the dynamic understanding of markets, as long as free entry exists, profits are understood as a sign that productivity increases are taking place rather than as a sign of monopolistic inefficiencies that need to be rectified by the government.

Although Holcombe presents such insights well, in my view this chapter remains the weakest in the book because it does not do a fair job of presenting the mainstream background on which the Austrian theory builds and from which it departs to some extent. For instance, there is no explicit mention of Ronald Coase, Armen Alchian, Harold Demsetz, or Oliver Williamson, although their ideas are briefly described. Even worse, the chapter uses production functions as its main counterpart but misrepresents them. Ironically, Holcombe describes production functions as doing much more than they actually can. He refers to the “recipe given in the production function” (p. 22) and claims that the production function embeds the “management function of the firm” (p. 24). In fact, the production function is a black-box perspective on the firm that says nothing about how the firm operates internally. It only tells how many output goods are produced with given combinations of inputs; it is an accounting perspective of the firm that says nothing about how the outputs are produced. In other words, it contains no recipe or description of management. Despite this error, the chapter still does a good job of emphasizing the need to account for entrepreneurship in the theory of the firm, but it would greatly benefit from using Gary Miller’s “managerial dilemmas” (Managerial Dilemmas [Cambridge: Cambridge University Press, 1992]) as a term of comparison instead of the theory of production functions.

The third chapter gets at the core of the policy implications. One question that often arises is why most Austrian economists are much more libertarian minded than the rest of the profession. Is this just a sociological artifact of how the school survived? As Holcombe explains, sociology provides only a small part of the answer. The more interesting part has to do with the implications of focusing on dispersed knowledge, on the entrepreneurial process, and on the role of the price system as a mechanism for coordination. Holcombe starts by describing the socialist calculation debate, explaining why the efficient allocation of resources, including for research and development, cannot occur absent market prices for capital goods. Second, he addresses the mixed economy, noting that by distorting price signals it often generates unintended consequences while at the same time hampering the market mechanism for dealing with unexpected problems. Third, he provides a brief look at long-term economic history and then revisits the connection between profit making and economic progress. He concludes this chapter with a brief discussion of welfare concerns, criticizing “the static view of welfare maximization” for overlooking “the fact that inefficiencies in resource allocation present a profit opportunity for entrepreneurs” and for being “overly optimistic about the prospect of government intervention producing an improvement in resource allocation” (p. 66). A possible critique of this chapter is that it doesn’t explicitly address industrial policy, which is still advocated in a development context by prominent economists such as Dani Rodrik.

The fourth chapter focuses on the Austrian business cycle theory (ABCT). This chapter may be the best in the book, and it is one from which both Austrians and non-Austrians can benefit. Holcombe’s presentation is very careful and rigorous. First, he points out that ABCT holds that booms and busts would occur even without central banks: “the cycle is caused by fluctuations in the money supply,” and it is “completely endogenous to the economy; that is, there is no outside shock that leads to the cycle” (p. 73). The ABCT in its simplest form is essentially a tragedy-of-the-commons theory of the fractional-reserve banking system. From the point of view of competing firms and banks, aggregate consumer demand is a commons, and banks have the incentive to “overgraze the commons” by lending too much, hence producing the unsustainable boom. As Holcombe explains, “A bank cannot unilaterally decide that the economy [is] entering a boom phase” because if it reduces loaning activity in the boom period, “it would eliminate its source of profit” (p. 75).

Second, Holcombe moves on to explain the more widely known aspect of ABCT—namely that central banks, rather than solving the commons problem, make matters worse because they add another source of monetary expansion and distort the signal provided by interest rates: “This [distortion] adds another degree of uncertainty to entrepreneurs because to anticipate the future they must anticipate the actions of the central bank” (p. 77). Third, he connects the simple theory of fluctuations to the theory of capital structure, explaining why the booms and busts do not occur uniformly throughout the economy but tend to be localized in specific sectors. He then also connects the discussion about business cycles to the theory of entrepreneurship as developed by Joseph Schumpeter and Israel Kirzner and discusses the possibility that creative destruction may itself cause business cycles. Finally, if ABCT is a tragedy-of-the-commons theory, what can be done? Holcombe ends the chapter by pointing to the research on free banking, which explains how, before central banks acquired the role of lenders of last resort, private banks organized in clearinghouses for the purpose of monitoring each other and occasionally helping the members that got in trouble.

The last chapter provides an overview of the history of the Austrian School, how it reemerged in the 1970s and grew into the present active research program. The chapter also includes some brief remarks about the school’s ideology and methodology.

For a long time, economists curious about the Austrian School faced the problem that all substantive introductions to the school were gigantic books. Hence, they were naturally skeptical about whether the required time investment was worth it, and, at best, they became aware only of small disconnected parts, such as ABCT. Not anymore. Randall Holcombe has done the apparently impossible: writing a short introduction to the Austrian School that presents all the key elements in its toolbox and shows how the most controversial implications follow from the basic framing of the problem in terms of coordination, entrepreneurship, dispersed knowledge, and out-of-equilibrium processes.