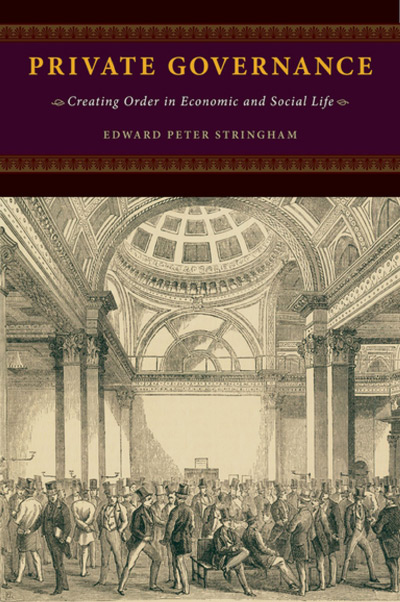 Edward Stringham’s new book Private Governance is a kind of intellectual sandwich, its bread being a discussion of the theoretical issues surrounding private governance and its filling being an illustration of the reality of private governance by means of a set of concrete and practical examples—stock markets, online commerce, private policing, alternative dispute resolution, and (by far the most challenging case) financial derivatives.

It should be obvious at this point in history that centralism (either central planning or legal centralism) is not the solution to all our social and economic ills. If centralism’s relative inefficiency were all that could be debited to its account, we could perhaps live with it, for, after all, even private governance doesn’t necessarily solve all our problems. Indeed, Stringham is careful to point out that not all problems are soluble. “In many cases there is no solution, and people just have to live with the problem” (p. 12). The trouble with centralism is not just that it fails to solve all our problems but that, apart from creating the illusion that all problems are soluble (and often imposing astonishingly high costs on its alleged beneficiaries), it either hampers or crowds out private-governance strategies that actually do work. Stringham acutely notes the isomorphism between legal centralism and central planning, remarking, “Just as the central planner assumes that without property rights, prices, profits, and markets the government can engage in rational economic calculation, the legal centralist assumes that government, a monopolist legal and regulatory system, can effectively weigh the effects of each rule to prevent problems in markets” (p. 16).

Whatever their source, rules and regulations have benefits, but they also have costs. Whereas those who provide private governance have incentives to get the balance right, centralists do not. When government intervenes, it typically either duplicates the effective rules already in place or adds rules that arguably would already have been there if they had been needed or were effective. But legal centralists typically do not have to bear the costs of regulation. In the delightful series of short films entitled Love Gov produced by the Independent Institute, Scott “Gov” Govinsky, legal centralist par excellence, having dealt a series of death blows to his hapless girlfriend’s business enterprise, responds to her anxious question “And if I follow all the rules and everything, do you think my business can still make a profit?” by blithely remarking, “I don’t know. Not really my area of expertise” (Episode 2).

In the “filling” section of his book, Stringham presents much that will be new to some and surprising to many. The rules of the world’s first stock market were not backed by state law and did not operate in the “shadow of the state” (chapter 4). The London Stock Exchange developed outside the scope of state law because of its members’ ability to allow the right people in and kick out the cheats and defaulters (chapter 5). Associations respond to incentives no less than do individuals. In the financial industry, it was quickly realized that providing information of certain kinds—listing requirements, disclosure—provided an environment in which people could invest with confidence (chapter 6). If you’re dealing with someone you don’t know, don’t live close to, don’t share a common legal system with (trading at a distance), how can you conduct business with a measure of assurance that if things go wrong, you can be compensated? Answer: you use intermediaries (chapter 7). In many cases, markets provide a risk-assuming intermediate mechanism that either eliminates or severely reduces the risks of trading at a distance. This is how PayPal works, and, indeed, it is how the Chicago Mercantile Exchange Group works. “By managing risk in the most sophisticated markets the world has ever seen . . . these intermediaries eliminate the ‘need’ to have billions of contracts enforced in court” (p. 111). Even private policing is possible when its costs are bundled with bricks and mortar, just as the cost of lighthouses can be met by harbor dues (chapter 8). And, of course, we are also capable of resolving most of our disputes amicably (chapter 9), but if we need a third party to resolve disagreements, the benefits of private arbitration are many compared to trudging through the slough of despond that is the state court system. Such benefits include flexibility; cost efficiency; speed; fairness and justice; due process; judgments rendered in accordance with commercial, technical, and professional standards; predictability and consistency; final resolution; privacy; and—a very important issue in all human relations, including commercial ones—preservation of relationships and continuing performance (chapter 10).

The pièce de résistance of the book, however, has to be chapter 11, “Successful Risk Management on Wall Street Even in the Wake of the 2008 Economic Downturn.” Here, not only does Stringham make no excuses for the “failure of capitalism” that the economic downturn of 2008 allegedly was, he actually takes the high moral ground and argues that the tools of the devil—mortgaged-backed securities, collateralized debt obligations, credit-default swaps, and the like (which Warren Buffet calls “financial weapons of mass destruction”)—not only are not intrinsically problematic but also are in fact new forms of property rights that help to “price the risk of default into initial transactions and let some pay others to assume their risks” (p. 166). To many, this argument will be so wrong-headed, perhaps even perverse, that it is worth quoting Stringham himself at length:

During the 2008 economic downturn the advanced contracts that many people point to as causing the financial crisis were simply reacting, as they should, to changes in economic variables. Symptoms are not causal factors. Although they are usually maligned, collateralized debt obligations, credit default swaps, and other advanced financial arrangements help parties manage risk. Even in a world in which the legal system offers limited protection to lenders, these advanced markets help expand the amount of capital available to borrowers. They should be considered among the greatest innovations in history. These markets are highly complex, not the design of government, and are made possible because of private governance. (p. 170)

If things do not turn out as we want them to or as investors want them to or as companies want them to, this is not a failure of markets or of private government; it is simply a fact of life. “Investors can choose riskier investment vehicles or more conservative ones as they wish. . . . ‘[F]ailures’ are not really failures; they simply exist because not everyone can predict the future” (p. 177). All human activities have some degree of risk. Eating, for example, carries with it the risk of choking, but to suggest that we eliminate the risk of choking by not eating is to make the cure worse than the disease. Financial instruments allow for the dispersal and reallocation of risk—they do not eliminate it.

Some people steal and cheat or attempt to cheat and steal. There is no way that we can organize our affairs to rule out such misbehavior completely, but we can and we ought to take precautions against it. Many people would like to live in the Garden of Eden, a perfect world in which nothing ever goes wrong, where everyone is delightful, and no one will ever try to steal your wallet. The world in which we actually live is quite different. Perhaps you should be able to walk along a deserted city street late at night with your wallet sticking prominently out of your back pocket and expect not to be mugged. Maybe you’ll be lucky—maybe not. But failure to take precautions is foolishness on your part, even if it doesn’t excuse those guilty of aggression. In the matter of the supervision and regulation of the financial sector, Stringham notes that “many mechanisms of private governance that easily could have prevented such fraud were available to investors, and they chose not to demand them” (p. 184). People’s failure to use the protection provided by markets is not a failure of the market, anymore than your failure to put locks on your door or to use the ones you have is a failure of the locks.

If you ever doubted that private governance can create and sustain order in economic and social life, read Private Governance and doubt no more. The book is clearly written and jargon free. It is occasionally humorous, sometimes even acerbic. My only criticism of it is that there isn’t more of it. It is a superb book, full of relentless data and insightful analysis, making it an invaluable resource for teachers and controversialists. The next time I get cheek or insubordination from my students on any of these matters, I’ll just hand them Private Governance and say, “Here, read this!”