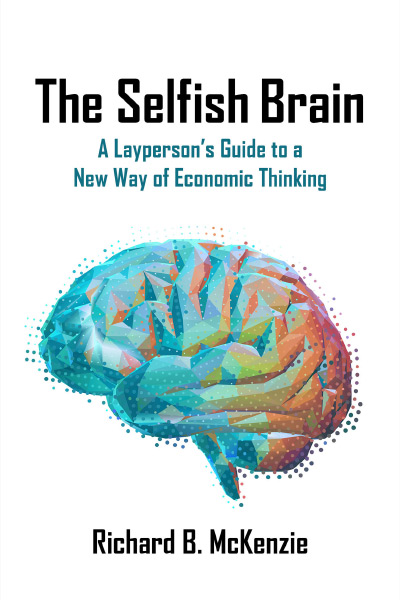 The Selfish Brain
A Layperson’s Guide to a New Way of Economic Thinking
By Richard McKenzie
Kindle Paperback
This book review is a web exclusive for the Fall 2022 issue of The Independent Review.

Economic discussions, especially within the world of public debate and policy, have increasingly found themselves based on two conflicting sets of principles. On one side is Neoclassical economics, the discipline of ‘textbook’ economics as we were taught it. Within this school deductive arguments are central, and the rationality of agents working within tight constraints offers a methodology to determine and predict how individuals will act. On the other side, equally claiming rights for influence over public policy is the discipline of Behavioral economics. This school takes empirical observations as the key guiding light and argues we should focus on how people really act, not how models say they should. The Behaviorist school has had a long history of pointing to biases and irrationalities in decision making and often questions the claims of rationality Neoclassicals base their models on. In public policy, the Neoclassicals often lean on the side of market freedom whereas the Behaviorist’s focus tends towards arguments to ‘nudge’ or ‘frame’ decisions in certain ways through government intervention. The Neoclassical and Behaviorist schools are in theory mutually compatible but the major disparities in their findings and prescriptions have led them to the state of almost warring factions.

In The Selfish Brain: A Layperson’s Guide to a New Way of Economic Thinking, Richard McKenzie aims to take on and reconcile these two squabbling schools in a way which he hopes can fuse the methodological rigor of Neoclassical economics with the “real world” Behavioral economists observe in the laboratory. Working to heal this rift is an admirable goal, and McKenzie promises to do so by changing the methodological focus of the Neoclassical school from the individual person to the human brain. He argues that this change of focus can square many of the irrationalities and biases the Behaviorist school raises against the Neoclassical school within the Neoclassical framework.

Naturally, in a book with a goal and target audience such as this, time must be devoted to “catching the reader up” since it assumes very little prior knowledge of economics. He handles this masterfully and devotes over two-thirds of the book to this cause. His discussion of the Neoclassical school and its sometimes-strenuous relationship with reality is well handled, drawing on the glaring descriptive inaccuracies the Neoclassical school makes of how individuals act. He walks the reader through the debate between these two schools drawing on key thinkers and arguments such as Milton Friedman’s (1953, “The Methodology of Positive Economics,” in Essays in Positive Economics, Chicago: University of Chicago Press, pp. 3–46) famous defense of positivism. The value of such an accessible and readable introduction to economic theory for more casual readers should not be overlooked. His unexpected applications of theory make for an enticing read, and he does not shy away from difficult topics such as the economic efficiency of volunteer versus draft military systems (p. 97–100) or the transitional gains trap and the American experience of slavery (p. 101–110).

With the stage set for the Neoclassical stance, he moves to the Behaviorist’s perspective and gives the reader a whistle-stop tour of the key thinkers, ideas, and public policy implications of Behavioral economics. He handles the challenge with grace, providing a compelling narration and highlighting the major arguments for and mutual criticisms of both schools. This includes the methodological differences which lead to Behaviorists championing many conclusions that fly in the face of the deductive conclusions reached by Neoclassical economics. However, he doesn’t give the Behaviorists a free ride by any stretch. He gestures to the current replication crisis within research, and how the experiment-focused school of Behavioral economics is no exception to this worrying trend. McKenzie points to some impressively bold claims from Nobel-winning Behavioral Economists, such as Daniel Kahneman’s “You have no choice but to accept that the major conclusions of these studies are true...[and] that they are true about you” (p. 174), which six years later turned into an admission that the evidence “was significantly weaker than I believed when I wrote it” (p. 175). He reminds readers that papers such as Dan Ariely’s research into ways to “prime” people to be honest were non-replicable and even led to the paper being retracted in 2021 over concerns about the reliability of the original data sets (p. 176).

These two sections of the book offer a brilliant “catch up in 180 pages” to get you to where the debate is currently and is especially welcoming and interesting for the layperson. It is laden with thoughtful examples and challenges, including some that encourage the reader to think through the problem before turning the page. He is not shy about his personal affinity with the Neoclassical school throughout the book, but at no point does the representation of the Behaviorist school feel disingenuous or unfair. However, as he approaches his positive project of unifying or at least mediating the debate between the two schools, his argument is unfortunately less persuasive.

His declared goal is to achieve this by changing the unit of focus within the Neoclassical model from the individual to the human brain. He aims to bring neuroscience into the fold to help inform the debate. The scientific accuracy is appreciated but the claims he makes seem rarely to depend on cutting-edge science which, if anything, should be considered a strength of the argument.

Something he stresses throughout the book is that the Neoclassical approach doesn’t often take decision costs seriously enough—a criticism many have levelled, from the Austrian to the Behavioral schools. He repeatedly argues (and convincingly) throughout that “Perfecting human decision making is, beyond some point, too costly for the evolved human brain” (p. 7). A brilliant demonstration he makes is an investment portfolio that guarantees that none of the investments within its portfolio fail. This portfolio is likely to either be so conservative in its investments or bear so many costs in research that it will achieve a lower total return than a portfolio which maximizes net gains by accepting some investments within a diversified portfolio will fail and accounting for it (p. 227–28). He also makes use of simple Neoclassical modelling to show why perfect rationality would be irrational, plotting the marginal gain of increased deliberation against its marginal cost. However, this could just as easily be focused on a firm making strategic decisions as on a brain. Although he makes appeals to the human brain’s effort being one of the scarcest resources, it is unclear why this should motivate such a huge methodological shift when it can be accounted for at the focal level of acting humans.

He points to how the Behaviorist’s approach to isolating “biases” or “irrationalities” can be akin to pointing out the holdings in said investment portfolio which fail are proof that the investment strategy is flawed. In doing so he references a notable and rapidly expanding body of literature, such as Brian Christian and Tom Griffiths’ work (2016, Algorithms to Live By: The Computer Science of Human Decisions, New York: Picador/Henry Holt). Few economists, Neoclassicals or otherwise, would argue against him here. But I worry he may be sparring with a position few would defend.

McKenzie makes very intelligent points which have real world connections to pressing public policy issues in his last chapter “Applications: Profiling, Competitiveness, and Rationality” which is particularly timely for policing policy. In this chapter he highlights the complexities which profiling can entail, why they are adaptive, and why they can have such negative repercussions. The very real and difficult reality of decision costs (which are ultimately a form of transaction costs) has been discussed at length from Ronald Coase to Michael Munger throughout the economic canon and I fear there is little he is adding.

In a book where the author walks the reader through every step at a comfortable pace, the methodological change that emerges from his shift seems unclear. If it is something we should merely be cognizant of—as he shows us that Neoclassical modelling can explain why humans should be boundedly rational—he is right, but not saying much that has not been said before. If he is proposing a way to square it within formal Neoclassical modelling, this move was much less clearly signposted than the rest of the book.

If McKenzie had convincingly shown how this shift of focus can offer us a way to formally model within the Neoclassical framework while taking decision costs into account, his book would have been revolutionary. As it stands, reiterating that “perfect rationality” is not only nonsense but would well be irrational does not involve mapping much new land. The move to a brain-centric economics doesn’t feel necessary, it is unclear why decision costs could not simply be one of many costs borne by the individual, without the shift of subject.