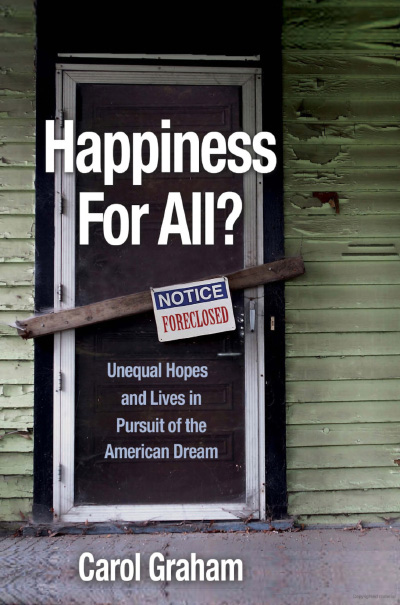 Happiness for All?
Unequal Hopes and Lives in Pursuit of the American Dream
By Carol Graham
Kindle Hardcover Paperback
This book review is a web exclusive for the Winter 2017/18 issue of The Independent Review.

As a pioneer in the field of happiness economics, Graham’s reputation as serious empirical scholar shines through in this well-researched work that is packed with detailed data analysis. Despite this book being perhaps her most depressing, one cannot escape being struck by its timeliness and the monumental importance of its subject matter. As always, Graham grapples with the interdisciplinary nature of happiness by drawing from the fields of economics, philosophy, psychology, and sociology. Studies like hers have received growing attention in the economics literature over the last decade and indeed subjective well-being seems itself to be emerging as a new field of interdisciplinary collaboration.

Much of the novel empirical work presented in the book utilizes survey responses collected by the Gallup organization from 2005–2013. She makes extensive use of evaluative metrics of life satisfaction that implicitly capture some features of Aristotle’s notion of eudaimonia, which is often translated as one’s living of a fulfilling and flourishing life. In addition, Graham utilizes other indicators measuring aspects of hedonic well-being, such as “did you experience stress yesterday?” and “did you smile yesterday?” And don’t worry—for those unfamiliar with topics and terms such as subjective well-being and hedonic vs. eudaimonic well-being, Graham provides accessible explanations and is transparent about the difficulties of interpreting and relying on these measures.

Graham builds on her deep body of work on well-being and ill-being in the developing world by using Latin American countries, as well as others, as comparison groups for this book’s focus, the United States. Relying heavily on empirical work in argumentation, the book doesn’t take strong ideological positions on such politically divisive topics as inequality, economic mobility, and social-welfare programs. But rather, much of the book illuminates the extent to which these topics are related to various measures of well-being. The relatively impartial nature of this approach will appeal to social scientists of all stripes but will leave many economists begging for deeper causal insight to be developed in further empirical work.

She paints a rather bleak picture for wide swaths of Americans living in poverty. Beyond the obvious immediate material deprivation, Graham illustrates that poverty’s attendant misery is also marked by higher levels of self-reported stress, worry, anger, sadness, and physical pain. These inequalities, in and of themselves, are not necessarily problematic for a society if they lead people to invest in themselves and they are able to better their conditions. But she also highlights by international comparison that the United States displays a much stronger positive relationship between income and the belief that hard work gets one ahead. The fact that belief in hard work falls as one descends the income distribution is potentially rife with endogeneity issues, but whatever the causal relationship may be, it indicates clearly that hopelessness and a lower faith in the “American Dream” are present among those who may need that very hope and faith most.

The bulk of the novel empirical work is presented in Chapter 4, where Graham takes on unequal well-being, people’s hopes for a better future, and income inequality at length. One of the main contributions here is to highlight the despair extant among poor whites as contrasted with higher levels of optimism among poor blacks and Hispanics. This may seem surprising as many blacks and Hispanics face objectively worse circumstances such as living in more dangerous neighborhoods (p. 94) as well as higher rates of incarceration and discrimination. Graham acknowledges that these two groups are undersampled in the Gallup Polls, which makes selection bias a serious concern as the higher proportions of incarcerated blacks would almost surely report much lower levels of well-being.

Nevertheless, her results seem consistent with others in the literature who have reported on multiple measures of well-being that have been trending upward for blacks in the U.S. since at least 1970 (see Betsey Stevenson and Justin Wolfers, “Subjective and Objective Indicators of Racial Progress,” Journal of Legal Studies 41 [June 2012]: 459-493). Even after attempting to adjust for incarceration rates their results remain quite similar.

One of the primary explanations she gives for higher life satisfaction and hope among poor blacks is a higher propensity among all blacks—not just the poor—to say that religion is important in their lives, and Graham notes “religion may play an important role in helping them to deal with adversity” (pp. 97–98). There is some tension in relying on religion as a clear explanation. Religion is not a statistically significant predictor of life satisfaction in all of her empirical specifications, though its magnitude seems roughly equivalent to being employed when it is significant.

Religion is also a significant predictor of social support and Blacks over age 50 report higher levels of both life satisfaction and social support. But middle-income blacks report lower levels of social support and there is no differential impact on social support between black and white for the rich or the poor. It would be interesting to see more exposition of these potential pathways to well-being or a more thorough econometric treatment of the role of religion if this is an important explanation for the hope we observe in the data.

What is a relatively newer finding in the literature is the hopelessness in poor white communities. As chronicled by Anne Case and Angus Deaton (“Rising Morbidity and Mortality in Midlife among White Non-Hispanic Americans in the 21st Century.” Proceedings of the National Academy of Sciences 112 [December 8, 2015]: 15078-15083), increases in all-cause mortality for low-education middle-aged white men began to appear over the same period studied here. This is a reversal of decades of improvement in mortality and is a particularly shocking finding in the developed world.

Consistent with the narrative of hopelessness, much of this increase is being driven by drug and alcohol-related deaths as well as suicides. This poor-white despair can be understood best through the lens of behavioral economics and the notion that individuals feel and fear losses more than they value realized or prospective gains. This loss aversion has much broader implications as Graham also notes that it was “those cohorts who have experienced downward mobility or fear of it who supported a candidate proposing to build walls, ban trade, and further divide society along racial lines” (p. 101).

Discussing some of her previous work, she acknowledges that, “individuals accustomed to poor norms of health or high levels of crime and corruption tend to adjust their expectations downward, and report lower well-being losses from those phenomena than respondents with higher expectations” (p. 28). These are the difficulties inherent in subjective measures. Expectations matter. This is somewhat like focusing attention on the unemployment rate without considering rates of labor force participation.

Still, many of Graham’s findings seem consistent in spirit with those of other well-respected scholars in economics such as John Bates Clark Medalist Raj Chetty and Nobel Laureate Angus Deaton. Graham is forthright about the shortcomings of the empirical work and describes paths for future research attempting to address these, some of which she herself has already begun.

Turning explicitly to income inequality, Graham presents correlations between Metropolitan Statistical Areas’ Gini coefficients and several well-being metrics. The broad theme of this is that higher levels of income inequality are related to less social support for all income groups and lower well-being—especially among the poor. While these are merely correlations, metrics such as these remain important as indicators of suffering and potential areas to which focus and further research attention should be paid.

Without the benefit of cleverly designed natural experiments or sometimes torturously complicated structural econometrics, it is nearly impossible to draw any causal inference from retrospective data. However, the combination of these suggestive findings paints a dark and desperate picture of American poverty. Especially troubling is the lower belief in hard work among the poor combined with high levels of inequality. If this leads to lower investment in the future, it can be a self-perpetuating system of intergenerational poverty, similar to what some have referred to as the Gatsby Curve (for more, see Raj Chetty et al., “Where is the Land of Opportunity? The Geography of Intergenerational Mobility in the United States,” Quarterly Journal of Economics 129 [November 2014]: 1553-1623). And as Graham argues, “[t]he very strong U.S. focus on individual effort and success, which has worked remarkably well for those with the luck, skills, and endowments that allow them to succeed has also resulted in a tendency to stigmatize those who fail” (p. 143). If inequality is—or is perceived to be—indicative of a rigged system where advantages are bestowed on a privileged few, it will breed hopelessness, resentment, unrest, and extremism.

Without much more further work, it is difficult, and even potentially harmful, to craft a policy agenda based on these results. Instead, her work’s importance is realized chiefly by the recognition that “well-being metrics give us a new perspective on the problem and new ways to evaluate potential solutions. They give us a new tool to evaluate whether interventions have changed daily living experiences and quality of life, such as stress, smiling, and access to social support on the one hand, and life satisfaction and expectations for the future on the other” (p. 138).

The book doesn’t make strong policy recommendations to address these issues and those mentioned will be familiar to most (e.g., Earned Income Tax Credits, early-education programs, family and community programs). Notably absent is discussion of a universal basic income which appeals to many for its relatively low administrative burden and minimal distortionary effects. This would directly address some of the book’s concerns about stigma, stress, and insecurity.

And though these data are inconclusive as to the precise causes and remedies of current despair, this work should set off alarm bells such that we may focus research attention on how to better the lives of America’s impoverished—lest they succumb further to the next breed of political predators promoting socially destructive policies that promise to undo the laws of economics. With desperate populations all too willing to be taken in by these magical promises, even the most self-interested should recognize that this suffering may be too harmful to ignore, and lead us ultimately to unhappiness for all.