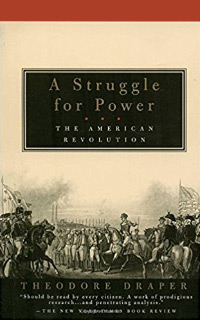 A Struggle for Power
The American Revolution
Theodore Draper
eTextbook Hardcover Paperback
This book review appeared in the Spring 1997 issue of The Independent Review.

Theodore Draper has a well-deserved reputation for producing excellent histories. He received the Herbert Feis Award for Nonacademically Affiliated Historians in 1990 from the American Historical Association, an indication not only of the quality of his work but also of the depth of his dedication. (You’d better keep your day job to support that type of interest.) His portrayal of the cause of the American Revolution will maintain his fine reputation.

There is no shortage of accounts of the coming of the American Revolution, so one wonders what value might be added by yet one more. Draper develops a new slant on one of the major interpretations of the cause of the Revolution, often called the neowhig thesis. That line of argument sees the war as provoked by the British attempt to gain control over the Americans, who had carved out de facto independence while left to their own devices during the colonial era. Draper views the contest as one between the Americans struggling to maintain control over their affairs and the British seeking to reassert control for their own imperial purposes.

All historical accounts are premised on some conceptual framework, whether their authors acknowledge it or not. Sadly, many historians who deny that they are “captive to narrow constructs” but rather “choose the method that is best in each case” are prisoners of implicit models that not only vary but all too often contradict each other. In contrast, Draper is very forthright about his thesis and consistent in his approach. He lays out his framework of power early on, relates each topic to it, and closes on the same note. This tactic works to his advantage by making his argument easier to trace and ultimately more convincing.

Power in this case has to do with who controls the American government—more specifically, particular functions of that government. For almost a century and a half, the British allowed the Americans to provide such local governmental services as law enforcement and public works. How they provided them hardly affected the rest of the empire and would have been awkward to manage from London in any case. However, American contacts with foreign parties, in either trade or military affairs, were considered imperial prerogatives. But the British government devoted almost none of its own resources to these functions, as Draper writes, “ruling the colonies on the cheap.”

By the middle of the eighteenth century, the American colonies had already been honing their own independence for more than a century. The imperial government had imposed taxes and regulations on the Americans’ foreign commerce, but the Americans evaded or ignored many of the most onerous burdens. The British never collected taxes for the military protection they provided the Americans; rather, they depended on an informal understanding that the Americans should contribute to military operations during wars by contributing supplies, troops, and naval bases. The net effect was that no formal arrangement was ever created to exert the power—à la Draper—that the British believed was their prerogative.

This informal arrangement unraveled in the middle of the eighteenth century. The neowhig thesis, which Draper supports in this particular, contends that the expulsion of the French from North America in 1763 freed the Americans from dependence on British protection. Draper adds to the scholarship on this point by showing that the British were aware of this effect; their awareness appeared in their domestic debate over whether Canada or Guadaloupe should be the concession taken from the defeated French. But like other neowhig adherents, Draper needs to probe this issue further. The Americans never really felt threatened by the French in Canada, who numbered only about 5 percent as many as the American population. The French navy could be a threat—and bases in Canada might contribute to that—but even during the French and Indian War, when the French threat was active, the Americans did not seem concerned. Of greater importance was that the American economy was growing rapidly, quickly putting itself beyond the reach of any foreign power. In other words, the war that removed the French presence coincided with a trend that encouraged the Americans to act more independently in any case. Draper deals with this important trend in another context in chapter 6, “This Million Doubling,” which documents the recognition by both the Americans and the British that the continued rapid growth of America was bound to upset the existing balance of power, allowing the Americans to act more independently.

Draper does not dwell on Britain’s relatively sudden, intense change of heart in wanting to gain power over the Americans. He mentions, but does not focus on to as great a degree, Britain’s concern that America’s growth was making it into a dangerously independent factor in world affairs, which other historians, such as Piers Mackesy (The War for America, 1775–1783. Cambridge: Harvard University Press, 1964), have emphasized. Draper quite convincingly shows how the Americans’ desire for independence came late in the struggle, only after they reluctantly concluded that regaining the old status quo within the empire was impossible. He also demonstrates the Americans’ search for principles and arguments to buttress their justification for making the adjustments being thrust on them.

Draper’s book is finely crafted and makes for pleasant reading. It presents a convincing mix of primary and secondary materials. The reactions of those directly involved come through persuasively. For the most part the narrative moves right along, frequently rewarding a reader with interesting insights.