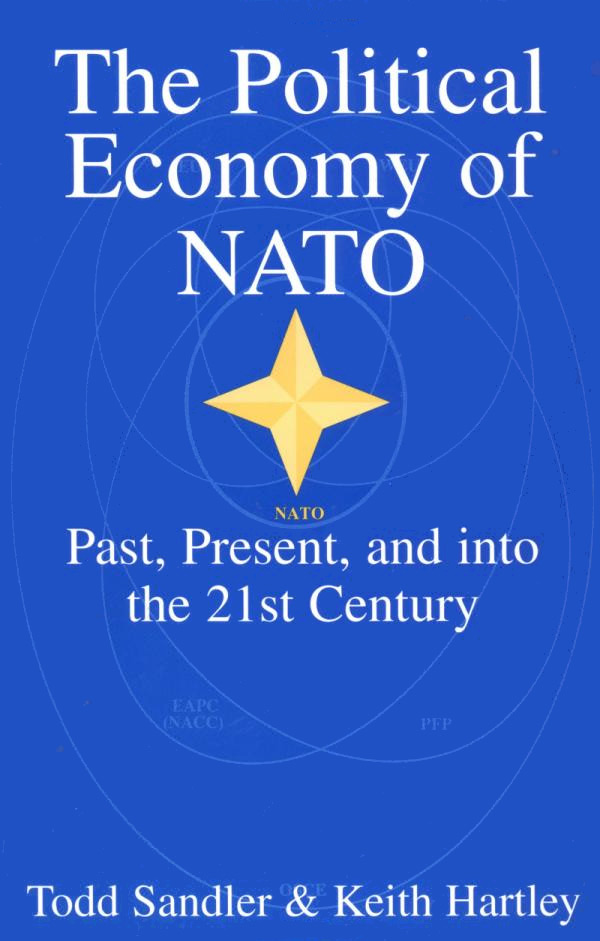 The Political Economy of NATO
Past, Present and into the 21st Century
Todd Sandler and Keith Hartley
Hardcover Paperback
This book review appeared in the Fall 2000 issue of The Independent Review.

Todd Sandler and Keith Hartley claim that The Political Economy of NATO “presents conclusions based on rigorous analysis rather than ideology” (p. xii), but the book clearly exhibits a bias toward retaining the North Atlantic Treaty Organization (NATO) and expanding its missions. The authors acknowledge that “perhaps the greatest challenge facing NATO is to convince its members and critics . . . that the alliance still has a role to play in the post-Cold War period” (p. 7). Sandler and Hartley admit that key questions include whether NATO should be abolished and whether other organizations could confront military threats more successfully than NATO. The book not only avoids discussion of those important issues but never even lays out the arguments expressed by the critics of the alliance.

The authors’ pro-NATO bias is demonstrated by two conclusions: first, “That NATO must redefine itself and demonstrate that it still has a strategic role to perform if it is to survive during the post-Cold War era”; second, “NATO security must take on a broader definition in the post-Cold War period to include the protection of the environment, resource supply lines, and informational assets” (p. 251). The first conclusion implicitly assumes that retaining NATO should be a goal. During the Cold War, however, NATO was formed as a means to an end, deterring or defending against a massive Soviet attack on western Europe. Public-choice economists might accuse the authors—academics who study NATO—of benefiting from the alliance’s post-Cold War attempt to avoid extinction by combating new threats and adding new missions.

In addition to the threats implied above, Sandler and Hartley identify the following as potential threats to NATO nations: transnational terrorism, increasing inequality in the world distribution of income, and rogue-state aggression and attempts to develop weapons of mass destruction. All such threats may affect nations within NATO, but the authors never make convincing arguments that such threats can be dealt with by an alliance designed for collective defense.

In fact, Sandler and Hartley use game theory to show that nations have incentives to ignore and in some cases to undermine agreements to fight terrorism. Yet the authors still seem to be reluctant to give up on a role for NATO in combating terrorists. Similarly, although they astutely note that recent U.S. administrations have exaggerated the threat from rogue states as a justification for retaining a large military and admit that cheating will undermine any attempt to create an international cartel to stop the rogues from buying arms and technologies for weapons of mass destruction, they cannot seem to pinpoint an institutional role for NATO in battling rogue states. Their suggestions that NATO could act as a multinational strike force for the United Nations to enforce international environmental treaties or to stamp out revolutions caused by increasing inequalities of income seem far-fetched and ill-advised. Sandler and Hartley even argue that alliance nations have increasing interests in Asia and that the NATO force might participate in any future Korean conflict! Such statements indicate their bias toward an activist NATO that is involved worldwide.

Despite Sandler and Hartley’s less than convincing analysis of how NATO will help combat the “new” post-Cold War threats, including terrorism, the section on the economics of terrorism is excellent. Sandler and Hartley note that terrorism is difficult to stop because terrorists incur less cost than the targeted country. The government of the targeted country must defend against all types of attack at multiple venues, but terrorists can strike the location that will minimize their cost, where government defenses are weakest. If the government improves the defenses against one type of threat, then terrorism, like water, will flow down the path of least resistance. As an example, the authors note that the fortification of embassies reduced strikes on the buildings but increased more lethal attacks—assassinations of diplomats outside the fortified areas.

Sandler and Hartley also correctly conclude that the law-enforcement model (sharing intelligence and apprehending terrorists) is preferable to the military model (retaliatory strikes) when fighting terrorism. The authors note that President Reagan’s military strike against Libya in retaliation for a terrorist attack merely generated more terrorism in response, but they fail to extrapolate that effect to U.S. military action in general. My own research has documented retaliatory terrorist attacks in response to U.S. and NATO military actions—for example, the war in Kosovo. A more restrained U.S. foreign policy would reduce terrorism against American targets far more than relying on a military alliance to carry on the fight.

The informational content of the chapter on NATO’s defense industrial base is good, but the chapters on NATO expansion and alliance burden sharing leave much to be desired. In the chapter on NATO expansion, Sandler and Hartley make logical errors, mischaracterize research, and fail to include important published data. They criticize Department of Defense (DOD), RAND, and Congressional Budget Office (CBO) studies of the costs of expansion for including costs that would have been incurred in the absence of expansion for improvements to the forces of new members and enhancements to the power-projection capabilities of existing non-U.S. NATO allies.

But all three studies included such expenses for a reason. Defense spending decreased significantly in new member nations during the post-Cold War period until they sought NATO membership at the very end of the 1990s. In the early to mid-1990s, with no imminent threat on the horizon, they were in no hurry to use the scarce resources needed to reform their economies for defense spending. To be accepted into NATO and obtain a long-term security guarantee against a potentially resurgent Russia, those nations pledged to increase defense spending. In short, joining NATO led them to spend more on defense than they would have spent without alliance membership. Since 1991, existing non-NATO allies have been pledging to increase power-projection capabilities; they have done very little to fulfill that pledge. If the new members are really to be defended, non-U.S. NATO allies will have to increase such capabilities. Thus, all three studies properly included the two categories of expenses in the cost of expanding the alliance.

Sandler and Hartley also criticize the three studies for not including a net present value of the costs of expansion or a quantification of its benefits. This criticism is Monday morning quarterbacking at its finest. First, it was impossible to predict when the expenses would be incurred; therefore, a net present value estimate could not be made without piling assumption on assumption. Second, benefits of expansion are controversial, and benefits in general are notoriously difficult to quantify. If the benefits were so easy to quantify, Sandler and Hartley should have done so themselves. Unfortunately, all they do is criticize the other studies.

As the author of the CBO study on the costs of expansion, I was disappointed by Sandler and Hartley’s mischaracterization of it, and I wonder if they properly characterized other research that they mention in their book. The CBO study did not uniformly assume a resurgent Russia as the threat, as Sandler and Hartley imply. In its most modest option, CBO assumed an attack by a medium-size regional power—for example, Belarus attacking Poland or Serbia attacking Hungary. Sandler and Hartley assert that the appropriate strategic environment for calculating costs must emphasize peacekeeping and crisis management; yet military planners must plan in the worst case for an Article V defense against a regional power. Furthermore, the authors attempt to compare studies that had different assumptions, when such comparison is unnecessary. A study that I completed after moving to the Cato Institute normalized the assumptions of the DOD and CBO studies for direct comparison and provided a detailed critique of DOD’s methodology (the authors relied on a general rendition of DOD’s assumptions in a General Accounting Office report).

Because Sandler and Hartley did not read the Cato Institute report, they lumped the RAND and CBO studies with the much less-rigorous DOD report and criticized them all. The RAND and CBO studies, however, identified the military requirements to combat a range of threats and provided a detailed cost accounting of those requirements. DOD used questionable, politically convenient assumptions and estimated the costs for many categories of military improvements by arbitrarily deciding how much was affordable (those numbers were kept low so that Congress would not get “sticker shock” and reject expansion). In short, the authors blurred the debate on the costs of expansion rather than providing illumination.

Similarly, in the chapter on burden sharing, the authors distort the issue. Although they make the keen observation that the alliance defense burden will be increasingly skewed toward the larger nations as NATO’s primary mission becomes peacekeeping and out-of-area operations, their quantification of U.S. benefits from the alliance are grossly overstated. Based on population, gross domestic product (GDP), and exposed borders, the authors assert that the United States and Canada would derive, by far, more benefits than any other nations in the alliance. Yet the Europeans live near any potential threats, and the North Americans do not. North America will help defend Europe, not vice versa. In a post-Cold War era, when the threats are low and the allies are rich, Sandler and Hartley should have devoted more attention to the important question that they avoid: For the United States, do the net benefits of staying in NATO exceed those of its withdrawal?