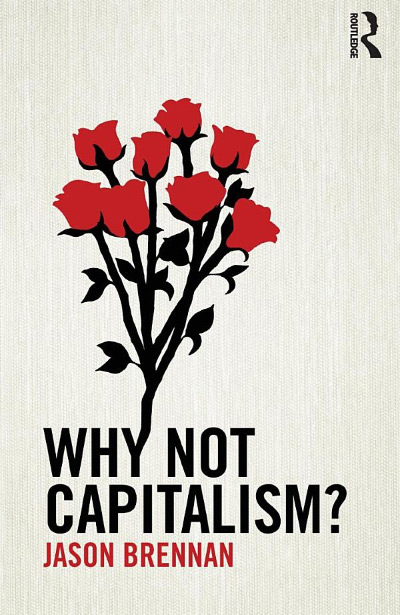 Why Not Capitalism?
By Jason Brennan
Kindle Hardcover Paperback
This book review appeared in the Fall 2015 issue of The Independent Review.

For decades, academic philosophers have wondered whether people were “good enough” for socialism. That is, they grant one of the two key premises of the argument for market systems but ask whether that premise might be mitigated by careful choice of institutions and group size.

For those late to the question, the two major premises of the consequentialist argument for markets are (1) the knowledge problem and (2) the human nature problem. That is, given that knowledge is complex, dispersed, and expensive, any aggregating institution must collect and interpret huge amounts of information and then give specific directions to individuals in highly differentiated local situations. Then, given that humans are concerned primarily about themselves—not exclusively, but primarily—they must have their own reasons to follow those instructions.

Suppose that I happen upon a substance under some rocks near my hovel. It is surprisingly heavy, but it turns out to resist both water and rust, and, even better, it can be pounded into thin, pliable sheets. In other words, an ideal roofing material from my perspective.

So I dig it up, heat it so it is easier to work, and pound it out to a nice thin foil a fraction of an inch in thickness. To cover my ten-by-ten-foot hovel, I need about eighty ounces of the stuff, so I dig until I find that much. And then I roof my hovel with it. The neighbors admire it, commenting on its beautiful yellowish color because, of course, it is gold.

It turns out, however, that there are many other uses for gold. Although it is perfectly true that gold is a fantastic roofing material, it is also useful for fillings in teeth, for electric circuits, and so on. Are these other uses “more valuable” than my roof? Without prices, how can we even tell? What does that statement mean?

Obviously, with prices I can fairly easily find out that the gold on my roof is worth almost $100,000 in alternative uses because the market price of gold (at this writing, $1,215 per ounce) multiplied by the amount of gold on the roof (eighty ounces) is one expression of the opportunity cost of using the gold for my roof.

But that brings us to the second problem: Why would I care if other people value the gold more than I value it for my roof? Human nature is to care (first) about oneself. I might donate the gold, knowing that others value it more, but I also might cover it with thatch and mud to disguise it. I value the gold on my roof more than I value giving the gold to other people in my society, even if I know that they value it more.

Of course, a market system solves this problem, too, up to the limit of subjective values and wealth distribution. Not only do I have information about the value other people place on the gold, but I also have a private incentive to correct that “error” in allocation. I ask myself how much I value the gold as a roof. The answer is $5,000. So $100,000 is much more than $5,000, and I can obtain a net benefit—to me, privately—of $95,000. And since the market price is what other people are willing to pay for the gold, it is likely that the social benefit of this transaction is enormous. The gold is removed from my roof and used for many other, more socially valuable purposes. I have the information (from prices) that I need to solve the knowledge problem. I also have the incentive I require (from being able to sell private property and accept money, standing for resources in exchange) to solve the human nature problem. The chance to sell the commodity induces me to give up a resource that I value because I know that other people in my society value it more. Markets give people both the information to know that others value the commodity more and the incentive to ensure that it moves toward that higher-valued use.

G. A. Cohen wrote a (justly) influential book entitled Why Not Socialism? (Princeton, N.J.: Princeton University Press), which was published in 2009, after his death. In that book, he ignores (as philosophers often do) the knowledge problem but takes on the human nature problem. Human nature is not determined, at least not completely, by genetics or instinct. Some substantial parts of our “nature” are in fact constructed by social interactions and learned norms. So even if it were true that “we” aren’t good enough for socialism, we might well be capable of being good enough for socialism, particularly if we were raised in a system that takes such values seriously. The question is not so much whether socialism is possible but whether it is desirable. If socialism is a better system, according to Cohen, we ought to be trying to figure out how to change human beings to make it possible.

Further, and importantly, the sort of behavior that Cohen has in mind is certainly not hypothetical or unobservable in the current crop of humans. He famously uses an example of a “camping trip” during which a group of people share food and equipment as they need it. Of course, the people who agree to go on a camping trip together, especially people who agree to go on camping trips often with the same people, are not randomly selected. But Cohen’s point is that human nature, far from being immutably selfish, is both institution and context dependent. By that reasoning, the problem is not that people are too selfish for socialism but rather that capitalist institutions block the expression of human generosity and public-spiritedness.

Cohen’s central point is that if one grants that the sense of collective identity and public-spiritedness is socially desirable, then it must also be desirable in an entire society. How such a thing might be accomplished and the size of such a society are admittedly unsettled details. But it is not obvious that such goals are impossible.

With my apologies for that lengthy setup, I can now address the book I actually want to review, Jason Brennan’s Why Not Capitalism? At its core, the book takes on Cohen by granting the key premise of Why Not Socialism? Let us suppose that the “information problem” is not the core problem—in other words, that it can be solved. Is it true that socialism would be preferable if it were possible? The reason that this problem is important is that the usual argument that “Hayek and Mises showed socialism is impossible” leaves open the deontological position that socialism would be preferable if it were possible. Brennan claims, however, that even that limited claim is not true: capitalism is not just consequentially better but also actually morally preferable.

The Brennan effort is in part a parody, but it is mostly serious. It adopts the literal structure of Cohen’s argument almost verbatim as a way of making Brennan’s point more clearly. As Brennan sees it, Cohen compares an idealized socialism with an intentionally flawed though perhaps realistic view of capitalism. Based on this skewed comparison, Cohen then concludes that ideal socialism is better and that therefore society should at least try to achieve that ideal.

Brennan’s counterargument is that we should consider either “real” types or ideal types. And if we consider socialism and capitalism in their flawed forms, we would discover that capitalism has certain advantages. Cohen does not really concede this point because he is not interested in consequences. But then if one can idealize socialism, one would have to idealize capitalism also.

The point is that four comparisons are possible. Cohen chooses only the comparison that allows him to reach his conclusion. But we might as easily idealize capitalism and then compare it to a flawed socialism—for example, as represented by the former Soviet Union. Cohen himself famously said, “The Soviet Union needed to be there as a defective model so that, with one eye on it, we could construct a better one. It created a non-capitalist mental space in which to think about socialism” (Self-Ownership, Freedom, and Equality [Cambridge: Cambridge University Press, 1995], p. 250). Fair enough. But then why despair about capitalism? If we are imagining improvements in human nature, then improvements in defective capitalist models should also be allowed.

At worst, then, there are multiple idealized utopias if one grants that the “improved people” project is feasible. But if you have to pick one, the assumption of idealized law-abiding and considerate citizens is at least as likely to point to capitalism. If we can assume people can be good, capitalism is absolutely awesome. Very little enforcement costs for contracts, no shoplifting, easy enforcement of laws, and we all get to do what we want, in groups, in social settings. Capitalism is social; it’s just not socialist.

As a means of illustrating this claim, Brennan uses an extended example, which he calls “Mickey Mouse Village,” as a comparison to Cohen’s idealized camping trip. In the Mickey Mouse Village, there are principles that guide behavior and social interactions. The first is the principle of “Voluntary Community,” meaning that people (and large mice such as Mickey and dogs such as Pluto) do the right things and for the right reasons because they are not morally flawed.

The second principle is “Mutual Respect,” where citizens are tolerant of each other’s beliefs and actions as long as they cause no physical harm or disturbances. Thus, when Goofy (dog) marries Clarabelle (cow), there are no objections or attempts to use coercion to prevent a voluntary contractual arrangement from being consummated.

The third principle is “Reciprocity,” meaning that all citizens recognize a moral obligation to offer assistance if it is needed on the assumption that they themselves will likewise receive aid if they need it. This is importantly not an instance in which villagers “confront one another as creatures of need. Rather, they trade value for value in all their relationships” (p. 32). It is not need that creates an obligation but rather membership in a community where one contributes and receives value in return— including a kind of social insurance in the form of promises of future aid.

The fourth and fifth principles are “Social Justice” and “Beneficence,” assuring that those who suffer through no fault of their own have that suffering mitigated by the other villagers’ voluntary actions. No villager would intentionally make herself the object of pity or strategically demand aid as a way of securing undeserved benefits because that would violate the principle of reciprocity. But if (for example) Pluto found that his nose becomes separated from his head because Mickey is cooking delicious soup, the other villagers will help find the bouncing nose and return it to its owner.

One might object that the example is unrealistic and that the principles are unlikely to be observed in real societies. Well, sure. But if we are allowed to conceive of ideals and then to use those ideals as a means of justifying actual real-world institutions, then we would have to admit that a society constructed around Brennan’s five principles would perform very well indeed.

Brennan has some fun with his argument, which is clearly a Mickey Mouse treatment of an important subject. But the focus of his logic is quite persuasive, I think. If one objects that the Mickey Mouse Village comparison is unfair, then one must also object that Cohen’s camping trip metaphor is just as unfair as a way of understanding a large complex society. And if one does accept the ideal-types comparison, it is at least arguable that ideal capitalism is better. Rather than saying that people “aren’t good enough” for socialism, we might conclude that socialism “isn’t good enough” to be preferable to capitalism.