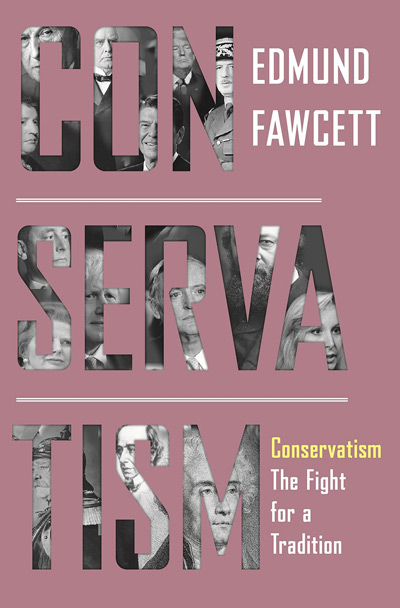 Conservatism
The Fight for a Tradition
By Edmund Fawcett
Kindle Hardcover Paperback Audiobook
This book review appeared in the Fall 2022 issue of The Independent Review.

Although Fawcett describes himself as “a left-wing liberal” (p. xiii), his overarching argument is conservative. “To survive, let alone flourish,” Fawcett announces in the book’s first sentence, “liberal democracy needs the right’s support” (p. xi). Fawcett apparently agrees with John Stuart Mill, who writes, “a party of order or stability, and a party of progress or reform, are both necessary elements of a healthy state of political life” (On Liberty, Utilitarianism and Other Essays. Oxford: Oxford World Classics, 2015, p. 47). Without the equilibrating force of conservatism, the life of liberalism’s idea eventually dissolves into what Edmund Burke called the “dust and powder of individuality.” But conservatism cannot serve a liberal democratic order, as Fawcett observes, “[w]hen, as now, the right hesitates or denies its support” (p. xi). The health of liberal democracy depends on the support of a liberal conservatism.

Fawcett begins with the critique of revolution in the political thought of Edmund Burke and Joseph de Maistre. In Burke, who championed “the authority of tradition, the folly of political intellectuals who ignored tradition, and the organic but vulnerable character of society” (p. 3), Fawcett sees the origins of a liberal conservatism that eventually accepted the “faction, argument, and disagreement” (p. 7) characteristic of liberal democratic politics. In Maistre, on the other hand, who “celebrat[es] instead faith and obedience,” Fawcett sees the origins of the “anti-rationalist legacy passed to authoritarian, illiberal conservatives and latter-day right-wing populists” (p. 7). Burke and Maistre set the stage for conservatism’s first phase of resisting liberalism in the nineteenth century.

The structure of Fawcett’s historical narrative consists of four phases, with the parties and politicians, and ideas and thinkers of four countries: the United States, Great Britain, France, and Germany. Fawcett characterizes conservatism’s first phase (1830–1880) by its initial resistance to liberalism. Politically, faced with the fading authority of elites and traditional political structures, conservatives faced a “strategic choice. They could try to recoup undisputed authority . . . Or they could abandon dreams of absolute control, accept parity with liberals, and strive to win the new game on liberalism’s terms” (p. 73). Generally speaking, Britain achieved this compromise, in reforms led by Robert Peel, Lord Derby, and Benjamin Disraeli; things took longer to settle down in continental Europe, while Americans fought over slavery. Intellectually, conservatives of this phase searched for arguments in defense of institutions like monarchy, church, and the landed interest. Highlights here include Fawcett’s discussions of the judge and writer James Fitzjames Stephen, a contemporary critic of John Stuart Mill, and the less political but philosophically subtle F. H. Bradley, who critiqued the ethics of individualism in a Hegelian spirit.

Conservatism’s second phase (1880–1945) represents its ultimate adaptation and compromise with liberalism. As Fawcett explains, once economic growth exploded under capitalism, conservatives became in effect laissez-faire liberals. “They [conservatives] spoke of old attachments but fought for broadened interests . . . and resisted the stronger demands of economic democracy” (p. 162). Americans led the way, buoyed by post–Civil War industrialization in the North, which was fused with a providential ethics of prosperity. Meanwhile, the moderate right settled into France’s Third Republic, German conservatives remained ambivalent, and British conservatives plodded along in characteristic fashion. Intellectually, conservatives continued to build what Samuel Coleridge called its “clerisy,” who, Fawcett observes, “tended to divide into those content to expose the flaws of their opponents and those who continued to seek a conservative philosophy of its own” (p. 205). Critical conservatives, such as Joseph Schumpeter, mainly sought to rebut the economic ideas of the left. But Fawcett also writes of positive conservatives like T. S. Eliot, who amidst a “debased, spiritless culture . . . urged a withdrawal to excellence” (p. 206). Fawcett concludes this phase with two notorious authoritarians, Carl Schmitt in Germany, and Charles Maurras in France, setting the stage for post-war conservatism.

In this third phase (1945–1980), Fawcett explains how conservatives finally consolidated political power, having “mastered a new liberal-democratic status quo” (p. 269), which spurred an intellectual period of recovery, typified in America by Russell Kirk’s The Conservative Mind (1953). Politically, the post-war period gave France and Germany an opportunity to recoup and rebuild in broadly conservative fashion, while Britain and America solidified a liberal conservatism against Soviet communism. Despite these clear lines, however, Fawcett writes of “conservatives [who] coped with rather than made the social weather” (p. 271). Highlights here include Fawcett’s discussion of Kirk’s revival of Burkean conservatism, Alasdair MacIntyre’s nostalgic ethical study After Virtue (1981), as well as Enoch Powell’s anticipation of both Thatcherism and the hard right turn of later British conservatives.

Fawcett’s fourth phase (1980–present) is split between the initial triumph of liberal conservatism, with its fusion of free-market ideology and social conservatism, and the later backlash against this unstable alliance brought about by “an illiberal hard right [who] took away voters from the conservative center” (p. 328). Familiar to even the casual observer of politics, the former is marked by the rise of Margaret Thatcher and Ronald Reagan in the 1980s, including the broadly liberal global consensus that followed the end of the Cold War. The latter, of course, is marked by Brexit and the election of President Donald Trump in 2016, along with similar moves rightward on the continent. Fawcett’s themes of the hard right are decline (of the nation and its character), capture (by self-serving elites), enemies (at home and abroad), and victimhood (of “the people”). Fawcett also notes that “[the hard right’s] present resurgence is the latest manifestation of the right’s original and unresolved ambivalence about capitalist modernity” (p. 353). Unsurprisingly, the intellectual conservatives of this phase operate at some distance from political reality. The central issue, in Fawcett’s framing, is whether a conservative intellectual says “yes or no” to “a hyper-liberal status quo” (p. 362). Thus, we find the likes of Rod Dreher, John Finnis, and Roger Scruton (“no”) discussed alongside Anthony Quinton, John Kekes, and Yuval Levin (“yes”).

The strengths of Conservatism: The Fight for a Tradition are many. Fawcett mostly makes good on his promise to avoid caricature, so that “[r]eaders on the right will recognize themselves and their tradition. Readers on the left will get a view of their opponent’s position” (p. xiii). Both readers also have much to learn, as the breadth of Fawcett’s survey is vast, dipping into material that even serious students and scholars of political and intellectual history may have overlooked or forgotten. That Fawcett manages to incorporate this level of detail without sacrificing the continuity of outlook he finds in the conservative tradition is similarly impressive. Despite tensions and intellectual uncertainty about itself, Fawcett demonstrates that there really is a conservative tradition in want of reconciliation and defense.

The major weakness of Fawcett’s history stems from his open animus toward right-wing populism, which he labels “a scourge” (p. 107). Since readers sympathetic to this point of view will likely not recognize themselves, it is doubtful that Fawcett fully succeeds at performing an epistemic service for his own side. Fawcett asks the left: “if we’re so smart, how come we’re not in charge?” (p. xiii). But “if we’re in charge,” a conservative might respond, “why has nothing I care about been conserved?” Fawcett writes of the electoral success of liberal conservatives but ignores how ineffective they have been at delivering political results. This is likely because Fawcett sees the primary role of conservatives in liberal democracies as making concessions to liberals. Mainstream conservatives should “find allies to their left with whom to rebuild and hold a shaken center” (p. xiii). But who drove out the center? A disgruntled conservative voter might argue that liberal conservatives holding political office have not even held the line against the excesses of the left, much less succeeded at conservative governance. For, it appears, that “liberal” democracy no longer stands for the basic pillars of classical liberalism around which conservatives and liberals might unite. Instead, it has increasingly meant moral and economic “progress” at all costs.

So, for all Fawcett’s handwringing, we might wonder whether some of right-wing populism’s grievances are worthy of democratic support. What liberal democracy needs from conservatives is not a rubber stamp for liberal ideas but competing conservative ideas about the direction democracy should take. Fawcett, to his credit, shows how enduring and appealing these ideas are. But he is reluctant to accept that they might drive democratic electorates in a conservative rather than a liberal direction. To acknowledge this would be to admit that there is, after all, a philosophy of conservatism, the ideas of which have sent the left into retreat, not because they exploit the exigencies of the political moment, but simply because they are true.

Tristan J. Rogers
University of Colorado
Government and PoliticsLaw and LibertyPolitical Theory
Subscribe Buy This Issue Get the App