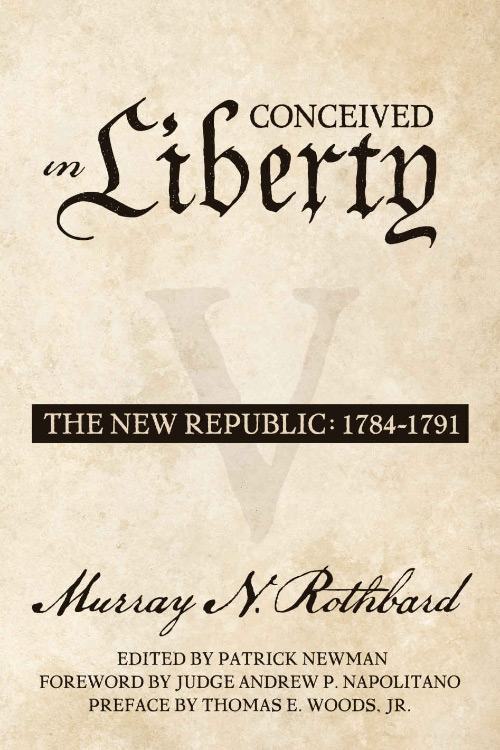 Conceived in Liberty
The New Republic, 1784-1791
Murray Rothbard. Edited by Patrick Newman
Kindle Hardcover Paperback Audiobook
This book review is a web exclusive for the Summer 2020 issue of The Independent Review.

Due to the unique nature of this volume, it is appropriate to consider its context. Murray Rothbard’s series began, and was nearly completed, in the mid-1970s, a time of significant civil and political unrest. While this volume rails just as hard against the interests and prerogatives of the elite as its predecessors, it also provides exemplary details regarding state finances immediately after the Revolution, demographics, and voting related to the Constitutional debate. Despite portraying both sides of the Constitutional debate in one-dimensional terms, Rothbard (1926-1995) provides astute observations regarding the effects of the various Constitutional components and significant alternative rationales for their inclusion. Uniquely, The New Republic opposes every aspect of the Constitution and describes the ratification process in each state.

Rothbard’s final volume of Conceived in Liberty focuses on America’s transition from the Articles of Confederation to the current Constitution. The Revolutionary War profoundly changed America’s pattern of foreign trade while forcing its new governments to borrow more heavily than their colonial predecessors had. Many economic policies, from tariffs to banking to money and debt issuance to jurisdictional issues loomed larger than they ever had under British rule. Additionally, conflicts related to the settlement of Western lands also required establishing new land border control policies. The remaining two-thirds of the book argues that the Constitutional Convention was initiated by a powerful minority of nationalists and that the process of adopting the Constitution was antithetical to the Articles of Confederation. Rothbard stays true to his mission of “bringing in the facts” (p. 31) by describing the minutia surrounding the adoption of the Constitution and presenting it as an elaborate design by the framers to increase their personal economic endeavors.

In addition to proposing an openly libertarian view of the Constitution, The New Republic has a decidedly economic perspective, starting with the change in post-Revolution economic conditions. Rothbard correctly identifies the core issues facing the new United States as competition in foreign trade and substantial sovereign debt. He also delineates problems arising from each state having its own debt while being simultaneously responsible for servicing the federal debt. While recognizing that “part of the reason for the state paper [bills of credit] issues was a frantic attempt to pay the wartime debt” (p. 53), he downplays the need for centralized solutions by equating such attempts with tyranny, such as referring to a Philadelphia merchant as “economic czar Robert Morris” (p. 53). This problem was further exacerbated by each state using different currencies, pounds or dollars, and corresponding disagreements over their equivalent values, especially in relation to debt payments (pp. 66-67).

Rothbard frames the Constitutional Convention in economic terms (p.69): “Typical of the eastern mercantile oppression over the mass of citizens and farmers was the imposition of excise taxes,” resulting in seizure of defaulters’ property where “in the time-honored way of neighborhood solidarity, local mobs [sic], prevented anyone but the owner from bidding for the property.” According to Rothbard, turmoil between elite and common interests regarding taxation and imprisonment for debt culminated in various community uprisings, referred to collectively as Shays’ Rebellion (p. 111). He significantly deviates from the established interpretation of the Constitution by claiming the main, if not the sole, purpose of the Constitutional Convention was to grant the power to tax to the central government because “the unanimity principle under the Articles of Confederation had made all attempts to impose a congressional taxing power impotent” (p. 65).

After various states solidified agreements regarding both the use of and revenue generated from bordering rivers, Rothbard declares it was used as a model for “devious and sinister machinations” (p. 130), referring to the Constitutional Convention. Rothbard portrays the Constitutional Convention as a conspiracy of various elite leaders pushing for a strong central government so that they can have more control of America’s citizens for their own private benefit. The key difference between this interpretation and that of Charles Beard is that Beard emphasized the role of public creditors rather than owners of individual commercial enterprises. Beard’s interpretation was weakened by the fact that “many leading Anti-federalists held large amounts of public securities” (p. 141, footnote 15). It became imperative for the convention organizers to keep their commercial interests by seeming to allow everyone to pursue their own.

The New Republic furthers its case by providing evidence that the Constitution was intended to limit the power of the people rather than to enhance it. For instance, the presidential election process made it so that “the executive would be...ostensibly subordinate to the broad public, but in reality removed from effective public control” (p. 154). Additionally, Rothbard provides an excellent summary of the minute voting statistics of the Constitution and related measures. Most impressive are Rothbard’s discussions of proposed provisions that were voted down, along with the arguments related to the famous compromises. Sandwiched within the details of the convention are characterizations of each side: the Federalists as power-hungry and oligarchical and Anti-federalists as wholesome and freedom-loving citizens who supported confederation. Rothbard asserts that the Constitutional Convention and the subsequent ratification process was illegal because it circumvented Congressional approval as required by the Articles of Confederation despite the fact that the presiding Congress considered the new document and allowed it to be considered by the individual states. Rothbard claims that “any self-respecting Congress would not only have not transmitted the Constitution to the states, but it would have denounced the new Constitution in the serverest terms” (p. 213), which is the first of many personal lamentations regarding what could, and should have, been done.

The New Republic next delves into the ratification of the Constitution state by state, a unique feat. The ratification debate within the states is covered with detail equal to the preceding sections, and with astute observations as to the differences in position and, more importantly, information dissemination. Rothbard simultaneously acknowledges the lack of Anti-federalist leadership and condemns the plot of Federalists to prevent the circulation of Anti-federalist opinions. Much is made of the latter with a nearly exclusive analysis of Northern/New England practices. Additionally, the lack of leadership and distance between Anti-federalist communities are portrayed as tools of exploitation by the Federalists rather than a significant hindrance to their activities. Rothbard argues that the refusal of many Anti-federalists to participate in the Constitution and ratification deliberations was a noble gesture of indignation rather than the tactical error it became. Furthermore, The Federalist Papers are only mentioned in the chapter related to the New York ratification debate simply because that is where the printing headquarters were for those essays. The sophisticated organization and structure of the Federalist leadership and Constitutional defense is submitted as a ploy orchestrated by the Framers to trick the populace into adopting a government structure meant to manipulate them by describing it as the best solution to the issues surrounding the post-Revolutionary financial crises. Additionally, Rothbard makes some interesting observations regarding the most essential, and underappreciated, aspect of the Constitutional debate.

The Federalists’ ability to sway specific Anti-federalists sealed the fate of the Articles. Rothbard claims financial and political bribery, along with the absence of John Adams and Thomas Jefferson, was the final marker of Federalist victory. Much is made of compromises such as promising amendments after the document was ratified, as well as offering coveted political offices to delegates who had barely failed to attain them. Finally, most Anti-federalists were poor, even among state delegates, and a little money went a long way to curing the ills they faced via expenses related to travel and lodging as well as the debt they still had to pay on their land and/or homestead. The monetary and position bribery were more for providing berth for the Federalist victory and a Bill of Rights was passed at the insistence of various states, some of which had a mind to initiate another convention due to the domineering nature of the Constitution as it stood.

Throughout his descriptions of post-Revolution America, Rothbard evokes an overbearing elite bent on national domination of the citizenry it hoped to exploit rather than protect. He asserts the right(s) of each state to operate as they see fit, especially with regards to taxes and treaties, while admitting that such a method diminishes unified leadership, “the Anti-federalists, however, suffered in the convention from a crisis of leadership” (p. 238). This very crisis of leadership was the reason many Americans considered Shays’ Rebellion a big enough threat to the new nation’s independence to countenance a Constitutional Convention. Despite Rothbard’s oversimplification of the two Constitutional sides, he makes some poignant observations regarding the nature of the republic as it was under the Articles of Confederation, as the Constitution Framers desired it, and upon its adoption in 1788. His analysis, though flawed at times due to his personal commentary and hindsight insertions, provides quality material to engage critical thinking in readers of all levels, from freshman students to seasoned historians.