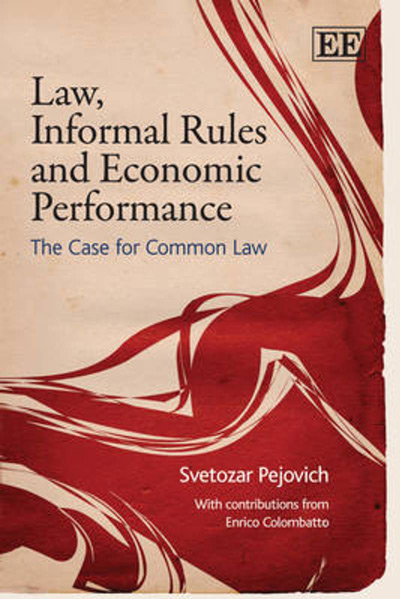 Law, Informal Rules, and Economic Performance
The Case for Common Law
Svetozar Pejovich, with contributions from Enrico Colombatto
Hardcover Paperback
This book review appeared in the Summer 2010 issue of The Independent Review.

Proper incentives matter for economic performance. To most readers, this claim is nothing new, but in Law, Informal Rules, and Economic Performance Svetozar Pejovich delves deeply into the microanalytic details of the incentive effects that arise from formal and informal institutions and into how they must mesh to produce preferred outcomes. He pays particular attention to the different incentive effects that arise from common law and civil law.

The book has three parts. In part I, Pejovich sets the stage for the subsequent analysis. He defines efficiency not as a static concept (as in most neoclassical analyses), but rather as a dynamic process akin to that described by Joseph Schumpeter. In the dynamic he portrays, institutions affect economic performance, which reciprocally affects institutions. Although institutions provide incentives, they also have transaction costs that affect exchange opportunities. All of this is straightforward to those schooled in the New Institutional Economics, but for others, Pejovich’s explanation can serve as a useful primer. He writes in a clear, concise manner with ample examples to drive his concepts home. His prose reminds me of that of his mentor, Armen Alchian.

In part II, Pejovich analyzes the incentive effects of the rule of law, which he maintains is crucial if capitalism is to deliver the goods. The problem with “the rule of law” in many analyses, especially those employing the concept in the usual cross-country regression, is that it is measured as a bundle, and one does not know which part of the bundle matters and, more important, how aspects of the rule of law can play out differently across countries. (This problem is one of the many reasons why I am not a fan of such cross-country analyses.) Pejovich does not fall into this trap. He decomposes the rule of law into four principal components: private-property rights; the law of contract; an independent judiciary; and a constitution. He also stresses the importance of individualism, which in his account is central to economic performance. Certainly, individualism fosters private-property rights, which allow for voluntary exchange to produce wealth, provided contracts are enforced. For Pejovich, the importance of the law of contracts lies in reducing transaction costs. A specified law of contracts is worthless unless an independent judiciary upholds it, thereby establishing the expectation of stable outcomes—consider Argentina, for example, where, since Perón, every administration but one has either impeached justices or forced resignations or added justices.

Pejovich goes beyond stability in his assessment of the performance of courts by considering accountability, which depends on the constraints the judges face. Although independent in the sense of assured tenure, the judges are still constrained. Pejovich distinguishes common law and civil law, arguing that precedents and the fear of being overturned by a higher court constrain common-law judges, whereas in civil-law countries, being faithful to the laws that legislators enact and the threat of reversal by a higher court constrain the judges’ behavior.

Pejovich argues throughout his analysis that the common law fosters better outcomes because civil law can change rapidly with the whims of legislators who enact statutes, whereas precedent constrains changes in the common law. To be sure, a populist legislature may undercut the rule of law in civil-law countries by its impact on judicial decisions, but judicial decisions in common-law countries may also be highly uncertain because of the huge discretion that judges have in deciding which precedents apply to a case at hand. Pejovich correctly argues, however, that in both systems the fear of being overruled by a higher court matters because of its feedback effect on the judges’ reputation.

I found the last part of the book to be the most appealing. Here Pejovich develops what he terms a “theory of efficiency-friendly institutional development.” He does not present a neoclassical theory but instead offers a framework for interpreting institutional changes and the likelihood that changes will produce efficient outcomes. He starts with the rule of law, a necessary condition for efficient institutional development. This view is akin to the view of Douglass C. North and others, which is now considered the mainstream view. Pejovich next introduces the concept of “carriers of change,” who are Schumpeterian entrepreneurs. In his view, entrepreneurs, in their quest to satisfy consumer wants, bump into legal constraints (formal institutions), which in an “efficiency-friendly” system will change to fulfill the entrepreneurs’ dreams along with the consumers’ wants. The legal system’s favorable response to entrepreneurs is important because entrepreneurs must stay in touch with the culture of the societies in which they operate if they are to be successful. Although such legal responsiveness certainly occurs from time to time, we need a much better explanation of the supply side of formal rules. As many commentators have recognized, the losers in the “creative destruction” game have an incentive to prevent the rules of the game from being changed in a way that affects them adversely. Having entrepreneurs fulfill consumer demands is not sufficient to spur institutional change because consumers constitute a fragile, unorganized political constituency group. Here I would like to see the introduction of political entrepreneurs who are also in touch with the beliefs and cultures of constituencies. Brazilian president Fernando Cardoso (1995–2003), for example, embarked on a regime of stable monetary and fiscal policy because he was in touch with consumers’ fear of hyperinflation.

It is accepted wisdom that informal rules change more slowly than formal rules. In addition, Pejovich argues, when formal rules are not in sync with informal norms, proscribed transactions will increase and give rise to an incentive for lax enforcement. To give a personal example, I received a speeding citation for driving at about eightyfive miles per hour in Montana in 1986, when the federal government had imposed a national speed limit of fifty-five miles per hour. My fine was five dollars for not conserving natural resources, and the money went to the state’s fish and wildlife department. Pejovich argues that informal rules change because of the entrepreneurial spirit of the “pathfinders.” Some people perceive that their self-interest dictates marching to a different drummer, and if formal rules do not punish them, others may follow. Pejovich uses as an example the changing norm of women’s working outside the household. A marriage between people of differing religions, races, or ethnicities is another example. Whether the informal norm catches on depends on the net return to the individual, which includes the costs that he faces from those who disapprove. Pejovich argues that changing culture or norms from the top down is very difficult. It is difficult, to be sure, but it is not impossible, especially during times of crisis, when the citizens may have lost faith in certain old ways and their beliefs therefore are more easily reshaped.

Pejovich concludes by arguing that “efficiency-friendly” institutional change must come from the entrepreneurs and pathfinders. The changes that emerge will fit the culture and lead to lower transaction costs of exchange, which in turn will lead to greater personal freedoms and more successful economic performance.Will the whole world embrace “efficiency-friendly” institutional change and capitalism? Unfortunately, it will not do so. Pejovich argues that many cultures’ social norms favor security and collective rights over personal freedoms and entrepreneurship. To his explanation rooted in culture and tradition, I would add the role of politics and the incentive to redistribute.

Almost everyone will gain something of value from reading this book. For those who work in the new institutional economics, Pejovich provides a thoughtful treatment of how common-law and civil-law systems affect personal freedoms and rule of law. The book’s larger market, however, will comprise educated lay readers, who will gain a deeper appreciation of the foundations of capitalism in the developed world and of the dynamics of interrelated institutional and economic change.

Lee J. Alston
University of Colorado and National Bureau of Economic Research
Economic PolicyEconomyLaw and Liberty
Subscribe Buy This Issue Get the App